A buddy of mine is looking to buy an airplane with an old radial engine because he says radial engines can fly inverted in aerobatic flying. What modern day engines (engines that you can buy today), are capable of flying in inverted flight?

Any “modern day” piston engine can allow for inverted flight if it has the right equipment on it.

The major differences between the7GCAA and 7KCAB were in the fuel system and the engine oil system. The engine was replaced with a Lycoming IO-320-E2A of 150 horsepower (110 kW), while a header tank of 1.5 gallons—located beneath the instrument panel—was added to the fuel system. In addition, the carburetor was replaced with a fuel injection system, and a Christen Industries inverted oil system was fitted to the engine. All of these changes were made in order to allow for extended inverted flight, a mode not possible in the earlier models.

disciplesofflight.com/american-champion-decathlon/ You can fly inverted continuously for about two minutes before the fuel in the header tank runs out and the engine falters. Rolling upright will recharge a depleted header tank in about a minute while the faltering becomes a smooth running engine again 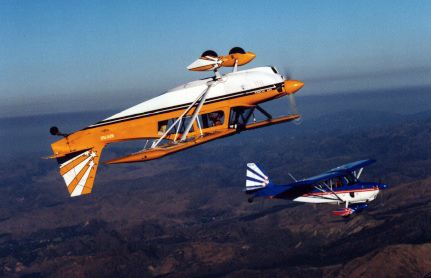 I fly competition aerobatics. The only setup I've seen is some flavor of Lycoming engine with extra bits for fuel (flop tube in a header tank) and oil (Christen inverted oil system).

Your friend is correct that some (most? all? -- I don't know) radials can handle inverted flight. Make sure there's a way to ensure continuous fuel and oil delivery to all the moving parts.

I would ask a lot of questions before turning a Continental engine upside down. I dimly recall some issue with oil getting past push rods that makes them unsuitable. (Please note this is not a slam on Continental - they're great engines for upright flight, but I don't know if that fish will climb a tree very well)

Most engines can handle inverted flight just fine, but it is the fuel system (gravity-fed fuel and/or carburetor) that inhibits the airplane from doing so because of their need to maintain a positive G-force to enable operation.

17
Does stall angle of attack in inverted flight change due to the camber of an asymmetric airfoil?
11
Are aircraft capable of sustained inverted flight at constant altitude?
33
Are there full scale helicopters capable of sustaining inverted flight?
22
Why the lack of faster piston-powered planes?
38
Why increase the number of cylinders in an engine instead of increasing their volume?
4
How do planes respond aerodynamically when bringing them into inverted flight by rolling?
3
In the US, would it ever be legal to fly a loop in any airplane or glider that was operating in the "utility" rather than "acrobatic" category?
0
In the US, are inside loops permitted while flying a US- registered DG-1000S sailplane in the "utility" category?
9
What downsides could there be to not letting your engine's oil temperature get above the given limit to taxi/take off before you do so?