What is the english term for "vol en ficelle"?

From what I have read online and understood, "vol en ficelle" is basically a low altitude flight preparation method that requires calculating a set of altitudes to be followed in order not to crash.

It consists of flying near the ground, but following small portions of levels (so without trying to flight closely the contours of the relief). It is then necessary, during the mission preparation phase, on a predefined route, to cut it into sections and determine, for each of them, an altitude (not a height) that allows to keep a sufficient margin relative to the ground. During the flight, it is important to know with sufficient precision where you are, then fly at the preset altitude.

The flight preparation is the main part of this technique, where you have plan properly the flight course and accorrdingly define corresponding landscape and montains heights.

Below is a map of such preparation. On the left side of the map is the "ficelle altitude", this flight preparation technique is apparently also called the "méthode numéri" 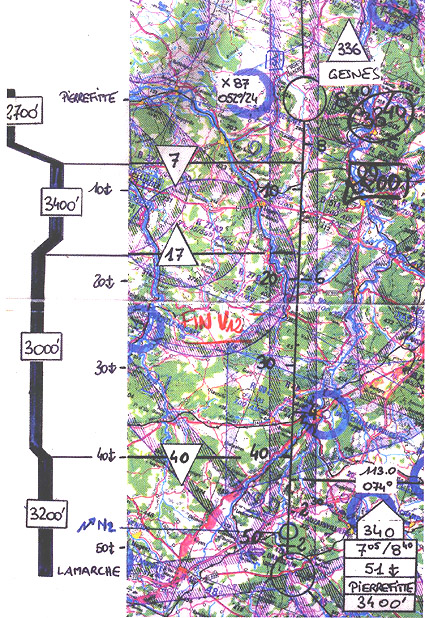 EDIT: I doubt it is contour flying, even though that's the closest term to "flight en ficelle" so far. Contour flying means flying at very low heights by maintaining a constant height above the ground, which means the altimeter is going to vary widely depending on the terrain profile. But with flying "en ficelle", the pilot follows a predetermined set of altitudes, thus we can fly without radars and the altimeter changes only in successive levels, i.e map in the OP. In "Flying in ficelle" the bulk of the job is the planning, ficelle refering to the thread used in the mapping technique to find out the "predetermined altitudes".

EDIT 2: In the HUD of the Mirage F1, the "ficelle altitude" that the aircraft should go not lower than, is represented by the reticle below.

Rings a bell? Are we overthinking this ? It is basically a low flying technique with predetermined set altitudes calculated in advance.

I found this translator-help page, which suggests:

Perhaps nap-of-the-earth flying (Wiki) is what you're looking for.

Nap-of-the-earth (abbreviated NOE) is a type of very low-altitude flight course used by military aircraft to avoid enemy detection and attack in a high-threat environment.

It also mentions other terms such as (emphasis mine)

Other, mostly older terms include "ground-hugging", "terrain masking", "flying under the radar" and "hedgehopping".

Not the answer you're looking for? Browse other questions tagged navigation flight-planning terminology pilot-technique or ask your own question.

26
What does the term "trimming" most commonly mean in aviation?
8
What is the origin of the term "Tyro" for inexperienced pilots?
1
What is the aviation term for what the navy calls "fire control system"?
7
Is "lower pressurization" the correct term for the 787 Dreamliner?
18
What would be a technical or slang term for 'in the air'?
13
What is the official term for a gas / petrol station for planes?
3
Is there a more specific term than 'flight line' for straight lines flown during flight?
2
Is there a standard term for "3D groundspeed"?
9
What does the term "Thru Pax" mean?