Is there an aerodynamic force that would keep this experimental WW2 era prop from flying as fast as an early jet?

It's an amazing aircraft. But if an enormous aircraft is that fast why not use the same concept for smaller fighter-sized aircraft? I assume there must be a good reason because it didn't happen.

I used a modified version of the drag equation found on NASA's website to estimate the speed increase if the front profile was reduced by 50% and everything else stayed identically the same. The modified version can be found here.

By reducing the front profile by 50% the top speed increased by 25.99%. That brought its top speed up from 410mph to an amazing 517mph. That's almost as fast as a jet. Is that possible or am I missing some other aerodynamic force that would stop the plane from approaching that speed?

Is there some other aerodynamic force that would negate that?

Answer to comment below: Zeus answered that reducing the aircraft's profile wouldn't make a significant difference because most drag was produced by the wing. Yes and no. Wing lift does produce a lot of drag at low speed but that drops as the plane accelerates. At high speed nearly all drag is parasitic (i.e. the shape of the aircraft) as evidenced by the chart below. Moreover my question was theoretical. If 50% of the plane's profile was removed the weight could be removed as well and with it the wing size. Turning the XB-42 airframe into a small, fighter aircraft was the general point of the question. 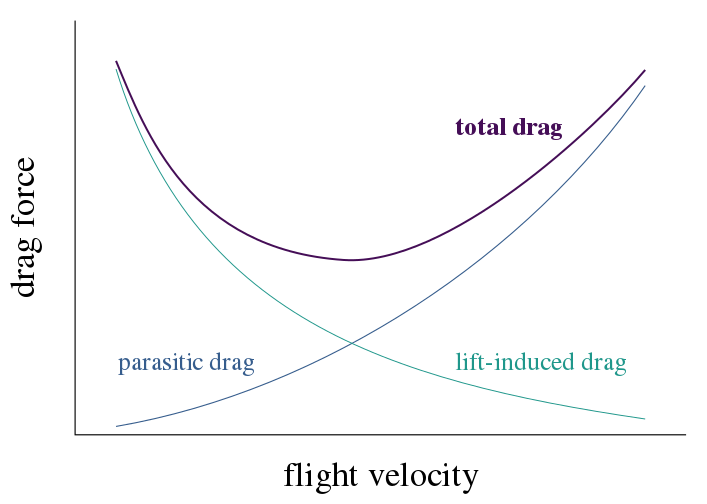 First of all, there were several propeller aircraft which were much faster than the XB-42. But let's stick with it and scale it to see where that brings us.

Now all what is left to be solved is how to squeeze the existing engines and their cooling system into half the fuselage cross section.

To answer your question directly: I used a slightly different approach and got an even higher speed. If I leave mass constant, the higher induced drag will limit the speed to 223.37 m/s, which is just shy of 500 mph. I wonder how you got a speed of 517 mph. The car example on the linked site does not include induced drag, so I guess your concept needs a little improvement.

all propeller-driven aircraft are subject to the same velocity limit. to make the plane go fast, the propeller has to spin faster, and the propeller blades achieve mach 1 before the airframe does. as they go supersonic, their thrust output goes down and they waste work in making noise instead of propulsion. the propulsive efficiency loss is sufficient to prohibit the airframe from achieving mach 1.

9
How can I calculate maximum rate of climb?
5
Is it possible to determine the approximate climb rate of an aircraft knowing its top speed, engine power and weight?
2
Will this simple equation (pic attached) produce a rough estimate of the top speed of a prop driven aircraft?
2
How does the power requirement change when weight and speed change?

9
Which aircraft endure the highest Max Q's (aerodynamic pressure)?
9
Why did the early versions of the Me-109 use a braced stabilizer?
10
How do Hoerner Wingtips work?
5
What makes the F/A-XX twin-engined tailless fighter controllable with engines out?
1
In theory which causes more parasitic drag? A large smooth wing or a small, rough exhaust port?
5
How did shortening the 707 increase its range?
9
Why was the B-52's wet wing more susceptible to fatigue than its dry wing, and not less?
26
Why are no recent small aircraft designed to be "characteristically incapable of spinning" as the Ercoupe was?
0
What are the advantages and disadvantages of fluidic thrust vectoring on aircraft?