Will this simple equation (pic attached) produce a rough estimate of the top speed of a prop driven aircraft?

Calculating the approximate top speed of a vehicle is straightforward.

Using this equation you can get a rough idea of the top speed of a car if you know its engine power, the body’s coefficient of friction and the area of its front profile.

Is it possible to use this same equation to determine an approximate top speed for subsonic aircraft? No doubt engineers at Boeing have to account for 100 additional variables, but is it good enough to produce a decent approximation for props that fly less than 500mph?

Also does the picture I attached below show the correct way to account for variables $A$ and $c$? 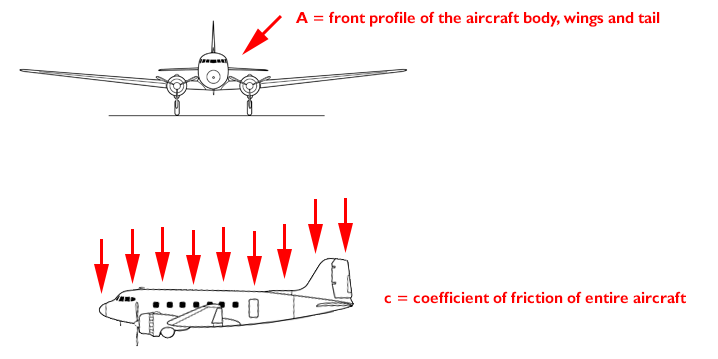 If $c$ represents the friction along the entire surface of the aircraft does this suggest that all things being equal an aircraft with twice the surface area would have twice the coefficient of friction? Or am I looking at $c$ incorrectly?

The short answer is no, that will not give you a very accurate estimate. As other mentioned, your equation does not include lift. Given some basic engine specs and aerodynamic properties, the top speed for aircraft can be estimated by determining the intersection of required power and available power. Available power is based on selected engines and propellers, and required power is based on the wing loading, lift coefficient, and other parameters that describe the amount of power required to sustain minimum lift.

Will this simple equation produce a rough estimate of the top speed of a prop driven aircraft?

Yes, but only with the correct reference area.

You are on the right track, but need to consider what a friction coefficient is. A coefficient is a dimensionless value which, in the case of friction, needs to be multiplied with an area and a dynamic pressure to yield a force. Equating this force to the available thrust does indeed produce a good estimate of maximum speed.

However, just applying some friction coefficient will not suffice. You need to know how much of the surface has a laminar boundary layer, what the local roughness and the Reynolds number of the flow are and you need to add correction factors for Mach and relative thickness, as demonstrated in this answer. And the method only works for sleek shapes - a blunt base like on the Shuttle will add a lot of pressure drag which is neglected by this method.

If you have done all that, use the full wetted surface of the whole aircraft (not just its wing surface!) for the drag calculation. The front profile will not help you - now you need the top and side view to arrive at a useable result. For good measure, you should also add a correction factor to account for surface imperfections (gaps, rivet heads, antennas …).

But lift is not considered, you might say. Yes, but drag due to lift is insignificant at top speed for well motorized aircraft. If you desire a more precise result, of course you should include induced drag.

If c represent the friction along the entire surface of the aircraft does this suggest that all things being equal an aircraft with twice the surface area would have twice the coefficient of friction?

The key aspect of flight is lift and your automobile equations don't have it so no, you can't estimate any speed for the subject aircraft. There is no weight, lift coefficient, wing span, or wing area. A coefficient of friction applies to surface area not to frontal area, where you need a drag coefficient. Coefficients do not change when applied to a larger reference area.

Here is a NASA page dealing with lift:

10
Why do we use dimensionless expressions in flight mechanics and aerodynamics?
7
Is there an aerodynamic force that would keep this experimental WW2 era prop from flying as fast as an early jet?
2
How can the zero-lift drag coefficient (parasitic drag) be calculated?

5
Is it possible to determine the approximate climb rate of an aircraft knowing its top speed, engine power and weight?
0
What will be the performance penalties of increasing the wing area of a delta winged aircraft to obtain a lower approach speed?
15
What is the commercial passenger aircraft top speed record?