How can a two-engine B787 create three contrails?

Today I noticed overflying aircraft (over Sydney at FL400) which appeared to have three contrails. When I checked Flightradar24 app, I saw that this overflying aircraft is B787. What would be the reason for three contrails with only two engines? Could the third be caused by APU, or just by a wake turbulence, or anything else? I tried to take a photo using binoculars (sorry for the quality, I tried my best). And also a screenshot of the A/C from Flightradar24 app. 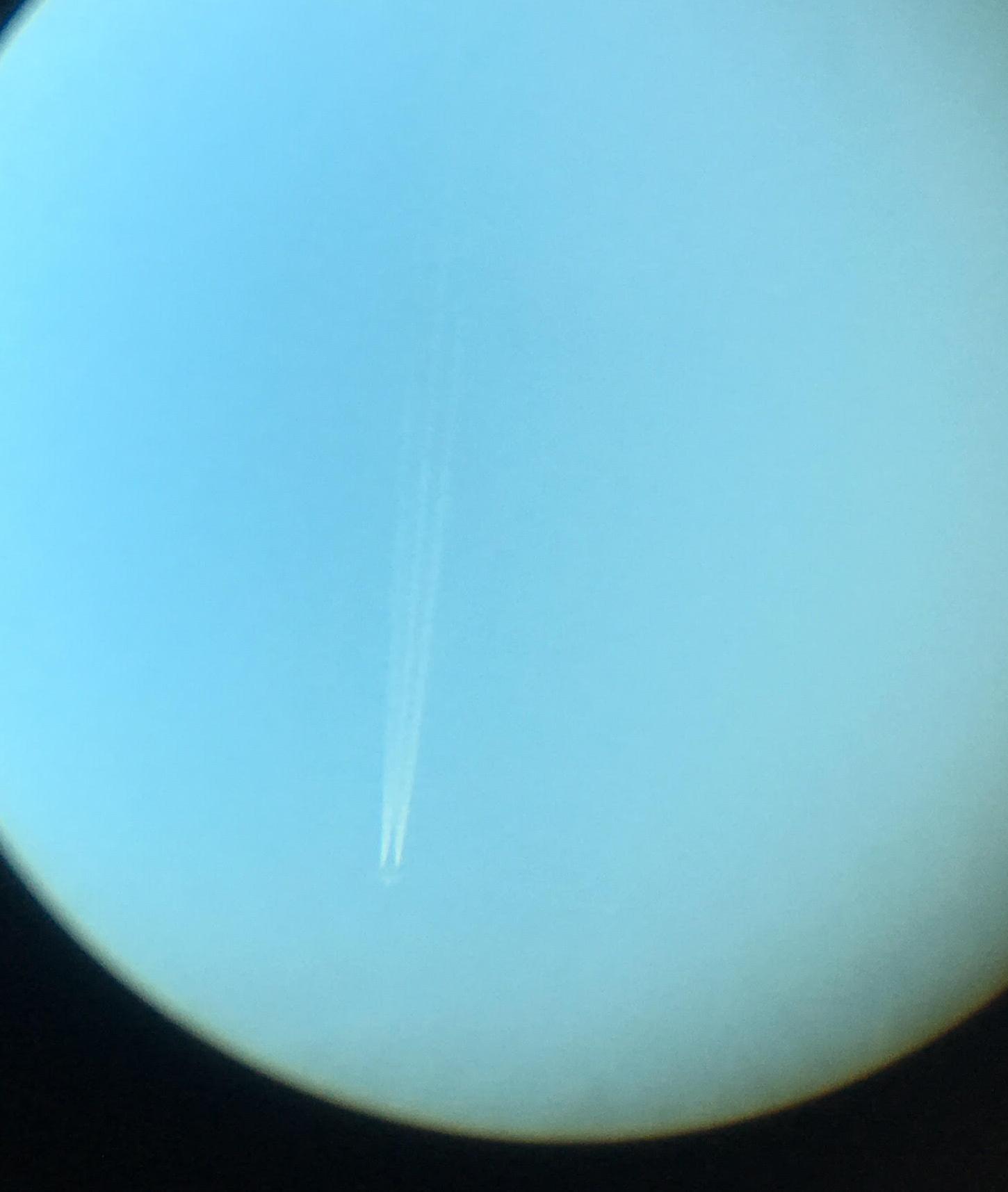 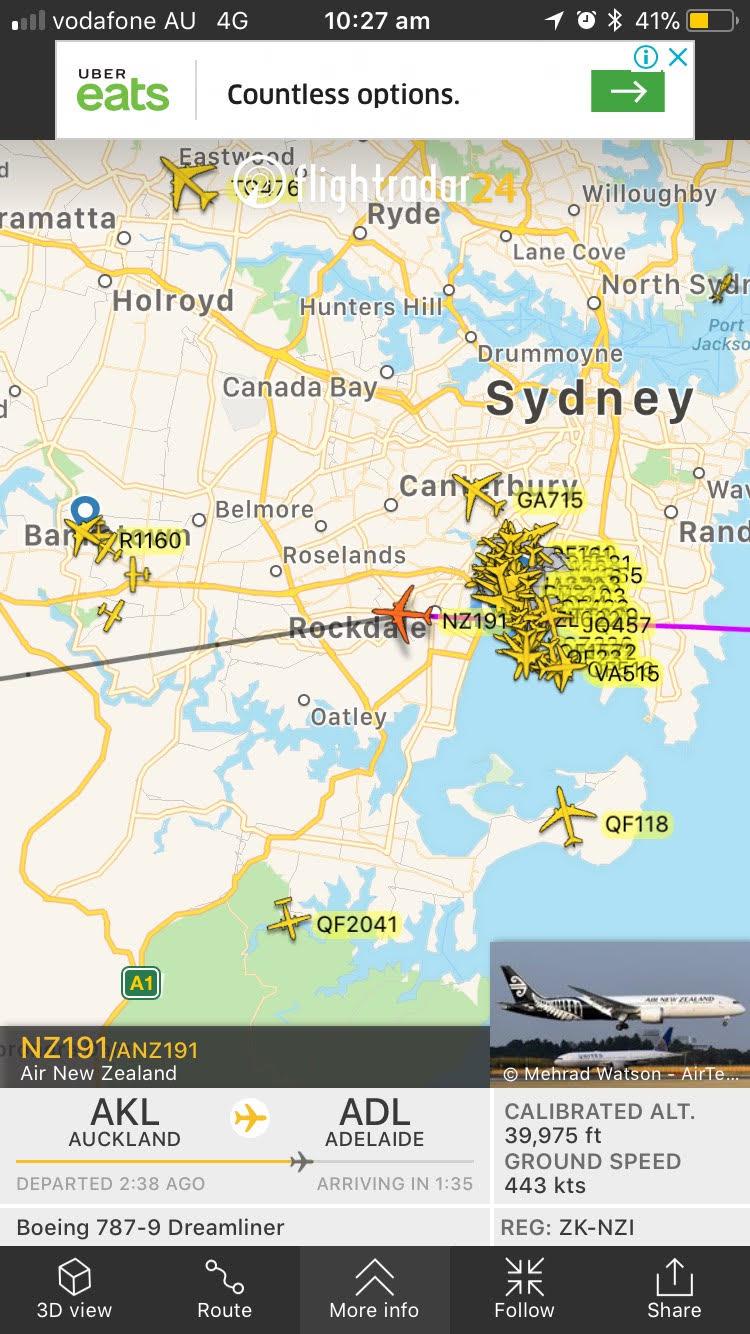 Contrails are created due to variances in the pressure of the air, coupled with the amount of moisture in that air. When the 2 engines of the B787 blast their exhaust out, the high pressure of the exhaust temporarily causes the moisture to condense. Two contrails are visible.

However, as the pressure waves from the 2 exhaust trails propagate through the open atmosphere, they interfere with each other. This interference can also affect the pressure of the moist air between the 2 "primary" contrails, sometimes resulting in another, "secondary" contrail. In fact, because of this, if there were enough moisture in the air, and the engines were powerful enough, there wouldn't actually be just 3 contrails. Rather, the contrails would present themselves as the crests of a propagating wave much like the crests of water waves as a duck swims by. In effect, we would see the 3 contrails separating, and between each of the 3 contrails, 2 more "tertiary" contrails would be visible.

Here on Earth though, the pressure variances and the density/moisture content of the air normalize far before any of that exotic pressure wave stuff could occur. Except we DO get that one in the middle!

Fascinating question. Not being an expert in contrail aerodynamics I'm forced to speculate, but I'm guessing the apparent three trails is caused by the spreading of the trails by wingtip vortexes.

I find similar examples called hybrid contrails. Here's one animation of a four-engine A340 from that article:

I think if you ignore the trails from the outer engines, this looks similar to your photograph. Here, the inner trails are twisted and spread by the wingtip vortexes into a pair of semi-transparent "tubes" of condensation trailing the aircraft. The apparent darkness of the tubes is thickest at the edges, since at these points we are looking through a greater thickness of vapor. As the tubes expand they touch, leaving three areas at the red arrows where the trail appears darkest from below. 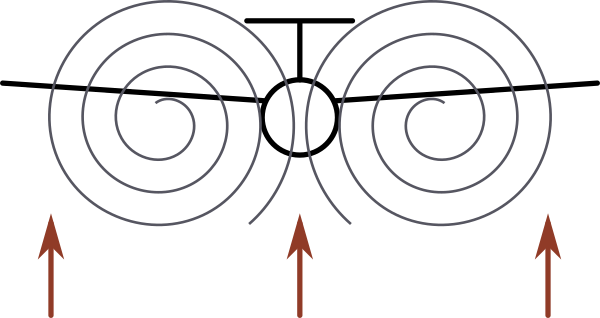 A similar formation can be seen in the first few seconds of this video. It happens quickly, but paused at the right moment there appear to be three trails: 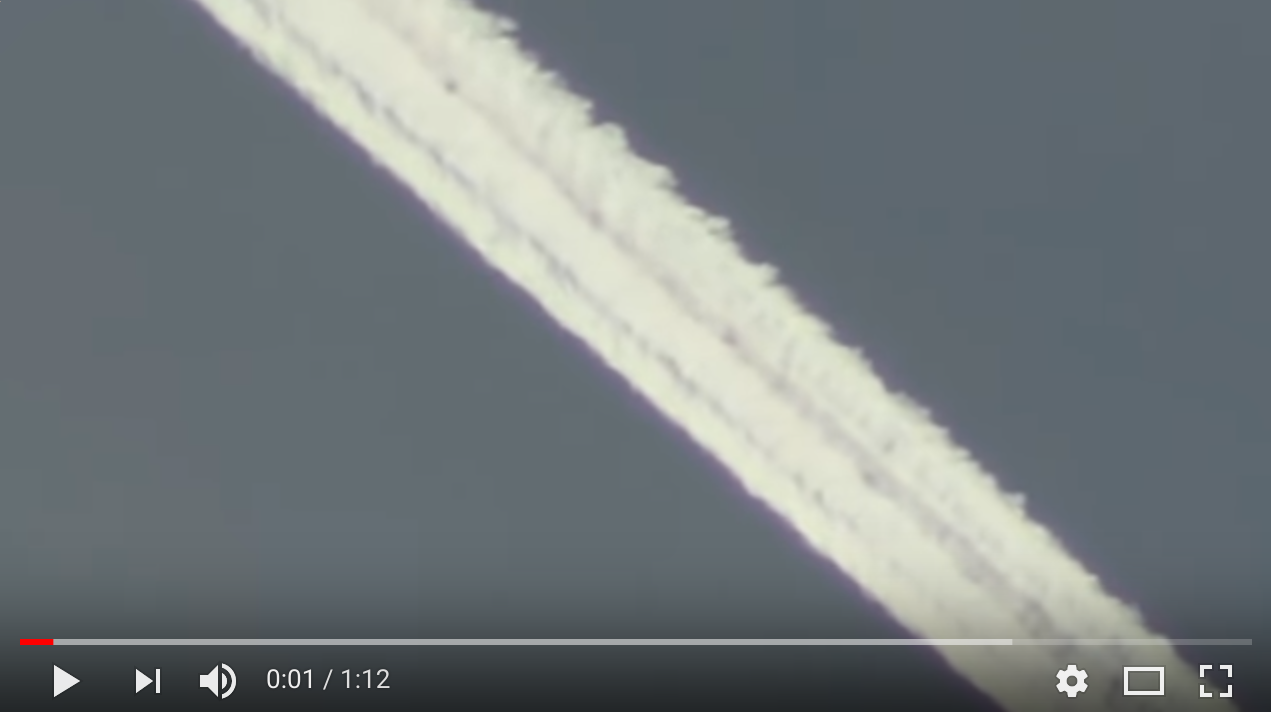 Within the next second the formation has spread enough it becomes an indistinguishable single trail again, but under conditions less favorable for persistent trails such as in your photograph, the trail may have dissipated by this time.

Those three contrails that formed are diverging, while maintaining some coherence. It's hard to be sure, but the third one seems to appear when the diverging fan of the initial two reach the centre line of the airliner. My guess is that they mark the vortices (vortexes) in the air shed by the tips of the flight surfaces. There's a big one coming off the end of each wing, and a smaller one coming off the end of each horizontal stabilizer. These latter are too close together and probably too much generally affected by turbulence generated by the fuselage to be seen as distinct.

So initally, two: one source of ice crystals emerging from each engine. But these then get sucked into the vortices, and two transitions to what appears to be three.

The trailing vortices of a big airliner are huge. They can cause serious turbulence for another airliner crossing the "wake" of a previous flight, and can cause damage or loss of control for a small aircraft. They are one of the good reasons for a mandatory minimum separation between aircraft approaching an airport. (ISTR, three miles).

I expect the earlier explanations are correct, but it also strikes me that there are more that two jet type engines on a 787 - the APU is right there in the middle and while its exhaust isn't nearly as strong as the main engines I can imagine that it might be strong enough to perturb the flow at the point where the main jet exhaust meets and have a visible effect on the main engine exhaust flow.

Not the answer you're looking for? Browse other questions tagged boeing-787 contrails or ask your own question.

3
How much pressure does the compressor of an engine of B787 exert on air?
11
How much time it will take a B787 to fuel completely when empty?
7
How much humidity is being maintained in cabin and cockpit of B787?
4
Can the need for an engine overhaul affect the ETOPS rating?
5
How do contrails compare between piston-powered aircraft and jet aircraft?
8
Which commercial aircraft can perform a parallel engine start?
4
How does engine exhaust temperature affect contrail formation and why?
28
Can helicopters create contrails?