Does the reference for AGL include obstacles?

Let's say a plane flies 10m above some trees, that themselves are 10m above the underlying ground. Would that be 10m or 20m AGL?

Or, in more abstract terms: What exactly is the reference point for AGL? The actual ground that you would stand on as a pedestrian? The point where you would first impact something (even if it's just a very lightweight sprig)? something else?

How does it work with objects like high bridges, that you could fly below but could still impact on a higher altitude?

AGL is "Above Ground Level". Ground is the reference. Trees, buildings, towers, and such are obstacles. Pilots need to be aware that obstacles exist. Most of the smaller ones can be addressed by just flying at a safe altitude. This is covered (in the US) by the following Part 91 rule:

§91.119 Minimum safe altitudes: General.
Except when necessary for takeoff or landing, no person may operate an aircraft below the following altitudes:

(a) Anywhere. An altitude allowing, if a power unit fails, an emergency landing without undue hazard to persons or property on the surface.

Following (a) and (b) is the safest course. Para (c) provides a great deal of latitude to fly low but has significant risks. Agricultural pilots fly very low all the time. But ask any one of them and they'll be glad to discuss all the stuff they've hit.

These rules are primarily directed at VFR flight. Under IFR, ATC clearances are designed to ensure operating at safe altitudes, clear of both terrain and obstacles.

For larger obstacles such as towers and bridges, they are charted. As you can see on the clip below: 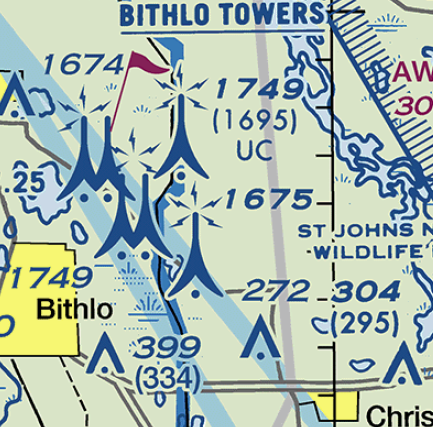 That being said,the reference of AGL is random. Because the RA should catch the top of the tree and if you were flying at a constant ASL with trees or hills below you, you will see your RA change all along your leg.

Not the answer you're looking for? Browse other questions tagged terminology altitude or ask your own question.

5
Is this "bearing" sentence utterly incorrect?
4
What does the NetJets "QS" stand for?
3
How can you find AGL if the altimeter is set to MSL?
2
What does "inertial" refer to in "inertial reference"?
1
Definition of "Rotation Speed" vs "Lift Off Speed" vs "Fly Off Speed"
3
How are altitudes handled with airports near or above transition altitude?
3
What does "mission mixing" mean for long-range aircraft?
7
What use was there for Boeing to include customer numbers in their aircraft model names, and why did they end this practice?