What is the average g force experienced on takeoff for an ultralight? 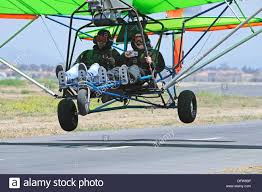 I fly part 103, specifically a Hy-Tek Hurricane. I also have a G meter on board. It is a Dynon D2, which features an artificial horizon (attitude indicator) and also a G meter. The average G's on takeoff is pretty small, usually around 1.1 to 1.2 Gs. I can also tell you it is impossible to pull anything over 2 G's during takeoff. I actually performed this test in the air at 2000ft, straight and level at full throttle (simulated takeoff from 2000ft?) at about 55mph, then pulled the stick back all the way in about 1/4 of a second until I was nearly vertical. The highest recorded G reading during this maneuver was 1.8 Gs. Of course all ultralight aircraft are different. I would NOT recommend performing this test from an actual take-off from the surface. Also you should consider that by performing the test at 2000ft, I was not in any kind of ground effect, so you would have to factor in that little bit of extra lift cushion you would get from an actual takeoff from the surface, but I would guess the extra lift component is probably small, so that is why I estimated 2 Gs max.

The answer depends on how quickly was this 2 m/s velocity reached.

Example accelerometer recordings taken during the Cessna 152 takeoff (not exactly ultralight, but also a small plane). The first noticeable spike was about 1.2g

Not the answer you're looking for? Browse other questions tagged aircraft-physics ultralight g-forces airplane homebuilt or ask your own question.

0
What is the lift-to-weight ratio during takeoff for an ultralight?
6
How much g-force is experienced in a 45° turn?
1
Does angle of rotation during takeoff affect the g-force?
2
Should I add balloons in my Ultralight wing to help it float if I land in the water?
1
What is the average aerodynamic load on a control surface of a commuter-sized airplane?
3
Is lift force less than weight during a descent?
1
Forces that wing attach fittings must transfer to fuselage?