What factors are included in the moment coefficient of a wing?

If the pole X is chosen to be the aerodynamic center AC (25% of the chord distance from leading edge), the moment of the lift force calculated about the AC remains instead constant with varying the angle of attack.

For a positive cambered wing, I understand that there is a moment due to the lift force (mentioned above) and also another intrinsic nose-down moment (which I think it is constant for all angles of attack) solely due to the cambered shape of the wing. This intrinsic moment is nonzero when the lift is nonzero or even zero. Does the value of the moment coefficient take this intrinsic moment into account as well besides the moment due to the lift force?

As much as I try to explain aerodynamics without resorting to potential theory, sometimes it is indeed helpful. If you interpret the pressure distribution around a wing as the sum of 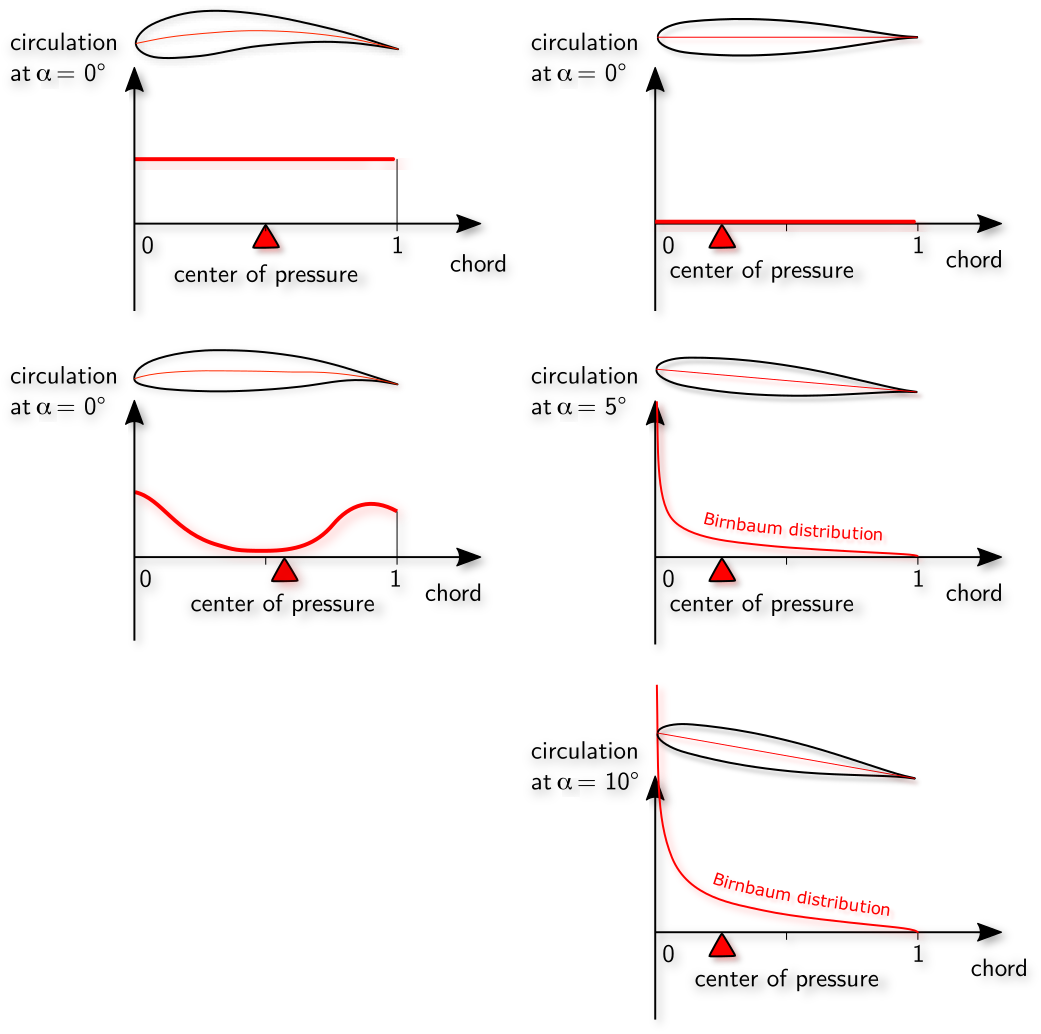 The remarkable thing about the uncambered airfoil is that its lift distribution over chord is geometrically similar between different angles of attack. It only scales in magnitude, but keeps its general shape. Therefore, its center of pressure is at the quarter point for all angles.

If the lift is composed of a force acting at the quarter point plus an offset moment, this moment is only determined by the camber lift. Since that is constant over angle of attack, so is the offset moment.

This is all strictly true only in inviscid 2D flow, but gives a good approximation for real wings with enough aspect ratio and no flow separation. Viscosity will muddle the picture a little and with smaller aspect ratio the center of pressure of the symmetric airfoil will move forward, but for most airplanes the above captures reality rather well.

For a positive cambered wing, I understand that there is a moment due to the lift force (mentioned above) and also another intrinsic nose-down moment (which I think it is constant for all angles of attack) solely due to the cambered shape of the wing.

Only if you decide to let your lift force attack outside of the quarter point. Then the lift moment caused by the distance between the force vector and the quarter point will produce that moment due to the lift force. If, however, the lift attacks in the quarter point, only the intrinsic nose-down moment which is constant for all angles of attack will be left.

Yes, indeed. At the right negative angle of attack, the downforce from that angle of attack will exactly compensate the camber lift, leaving the whole airfoil at zero lift but still with the constant moment.

Does the value of the moment coefficient take this intrinsic moment into account as well besides the moment due to the lift force?

Again, only if you (against all convention) decide to define your lift force in a point different from the quarter point. As the moment coefficient is defined, it contains only the "intrinsic moment".

When separation starts (and even with a thicker boundary layer) this will gradually break down and the moment will fluctuate. But then we move outside of the linear range of aerodynamics and potential theory will no longer apply.