What are those things under the Concorde’s cockpit windows?

I’ve noticed there are little bits sticking out under Concorde’s cockpit windows and they’re too small to be canards. Are they some kind of vortex generator or something? 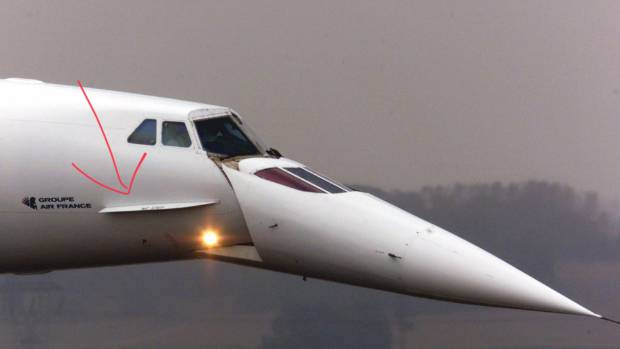 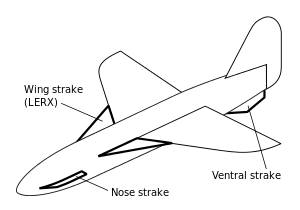 Those are nose (forebody) strakes, from Wikipedia:

On both supersonic and subsonic types, smaller strakes are sometimes applied to the forward fuselage to control the fuselage flow at high angles of attack; for example the Concorde SST has small nose strakes "to get a better directional stability".

Unique to the [DC-9] Series 50 were aerodynamic strakes mounted below the cockpit to assist in lateral stability at low speeds and high angles of attack by stabilizing the vortex pattern (Source: Great Airliners Series).

A 1998 NASA paper on the forebody strakes notes:

Results of this initial, exploratory investigation indicate that the use of strakes on transport aircraft configurations can have a noticeable effect on directional stability. The effectiveness of even very small strakes means that such a concept could be applied with perhaps only minor impacts on drag and performance. The requirement for minimum levels of crossflow, however, could mean that direct application of this strake concept may not be of great benefit in development of a control effector.

Recognizing the ability to alter the fuselage flowfield with relatively small surfaces, whether fixed or actuated, at low angles of attack should hopefully spur greater research toward the understanding of the flowfield behaviors that impact lateral/directional characteristics of transport aircraft. The STRATA program will continue along this course in improving flowfield understanding and in the development of innovative control effectors for transport aircraft configurations.

This is what it is and what it does. As for the how, my basic understanding from the paper is the high angles of attack (such as those experienced by the Concorde in slow flight) increase the crossflow of the fuselage (air flow around the circular cross section of the fuselage). Adding those strakes controls/limits this crossflow and improves the stability by way of vortex generation.

Another mention from a 1976 NASA research:

The use of nose strakes (currently in use on the Concorde) has been investigated. The data indicate large increases in directional stability due to the strakes. For example, at the approach angle of attack of 8°, the strakes approximately double the value of $C_{n_{\beta}}$.

These are called vortex panels. At supersonic speed the inner engines were starved or air so the panels were designed to create a swirl of air to feed them. I never designed them but I wrote the cnc program to machine them. They were a sandwich of aluminium frame upper and lower parts with aluminium sheeting riveted over the top and bottom.