Would a coaxial propeller with the second prop slower and larger improve speed?

Looking at various propeller designs, I started wondering about these limitations:

This made me wonder if a coaxial prop had a larger prop spun at slower speeds and a smaller prop spun at high speeds would increase thrust better, or do other designs already deal with that problem?

I think what you'd ideally want to do is to have a fast-rotating "inner" propeller and a slower "outer" one, or actually a propeller whose RPM gradually decrease from the inside to the outside. Although that would look cool, it doesn't work with non-fluid materials for the rotor :o) So, the next best thing is to have two behind each other, where the downstream one spins a bit slower.

How I understand your proposition

Counter-rotating props do have the advantage that the second one can "straighten" out the flow from the first, effectively working similar to (but not entirely like) a rotor/stator couple in a turbojet. This means they can transfer more power per rotor area than single rotors. By putting the slower-spinning one behind, this couple will leave less swirl in the flow than the other way round, which sounds like a good idea to me.

In a counter-rotating rotor couple, the second rotor is exposed not just to the mean swirl coming from its upstream partner (for which it is designed, and which can increase its effectiveness), but also the pressure signatures and wakes coming off each blade. Every time a blade passes through one of these, the stagnation pressure at its leading edge goes down very sharply and the increases again. That makes a lot of noise, and also causes vibration in the blade, which then has to be made strong enough to deal with this. This is also the reason why most such rotors have swept blades like these: 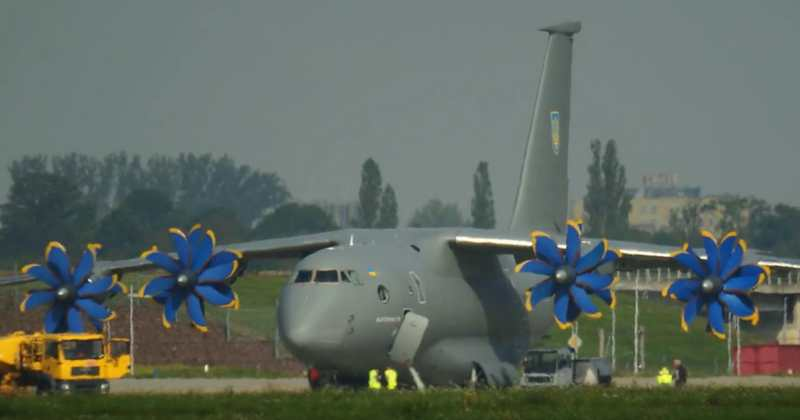 This means that at no moment will the entire blade of the downstream rotor be in the wake of an upstream blade, but it will gradually pass through it. Still the blades have to be quite sturdy, which also prevents them from being very long. That, in turn, limits the ability to increase efficiency by making long, slender blades which produce less thrust per rotor area but make up for it in radius (like wind turbines, for example). That's one reason why most such configurations these days are seen in military airplanes where large elegant propellers would reduce maneuverability but lots of thrust is needed, pronto. Also, these machines are built very robustly anyway, so the added vibrations can be dealt with. In a passenger aircraft, the noise alone would be hard to sell to airlines, but developing the mechanical components would also not be easy. At the moment it seems that only Antonov has experience with large configurations of this type.

That said: These concepts keep cropping up, and it seems as if it should be possible and efficient to use counter-rotating rotors with strongly swept blades to replace turbofan engines at speeds that would seem a bit high for regular propellers (but maybe a bit low for turbofans). Here are two sources I just found which give you some idea of what the flow looks like, and what types of aerodynamic and acoustic problems the designers have to content with:

The problem with having a larger downstream prop

You can also see in the references above that usually the downstream blades are actually shorter than the upstream blades. The reason is that otherwise the tip vortices from the upstream propeller would hit the downstream one, and that's acoustically, aerodynamically and structurally not nice. Even without those vortices, it would make sense because the downstream prop gets more vibrations either way, so it has to be sturdier (shorter, thicker blades will help!). I think some of the existing configurations (the AN-70 above for example) do have equal blade lengths, but they are very much known for being loud, and any new civil application cannot have that.

This, by the way, is also why the configurations under discussions are rear-fuselage mounted rearward-facing rotors: That puts the source of the noise a good way downstream of the passenger cabin, instead of right next to their windows (which is loud enough with regular props already, as any passenger in a Saab 2000 can confirm). It also has the benefit of preventing accidents where a blade breaks off and hits the passenger cabin ...

Coaxial, contrarotating props are one way to improve engine efficiency over a single propeller. When doing static or bench testing with no airflow into the props, the front prop will carry more load than the back one (which may have lead to this question).

Fixed pitch propellers "unload" a bit once the plane gets moving. A distinct increase in rpm can be heard with models. This effect is also called "windmilling".

With a contra rotating prop, the loads on the front and back props will there for even out more in flight.

An increase in weight and complexity of the gearbox has caused many to shy away from this design, but it is an interesting study as powerful electric motors with much higher rpm ranges are coming into use.

Contrarotating propellers may have a better efficiency than a single propeller, since the propwash is 'straightened out', the tangential component of the airflow being much reduced. Besides, and for very high engine powers, those props have also the advantage of being able to absorb a much higher power. But that's all...

Not the answer you're looking for? Browse other questions tagged propeller efficiency thrust or ask your own question.

4
What‘s the thrust of two stacked propellers?
6
Do contra-rotating propellers have the same RPM?