How are engines numbered?

On a commercial aircraft, the number of engine is usually 2, 4 or 6. When the technician or LAE was given task to inspect an aircraft engine no 2 on a 4 engine aircraft. Which engine would they go to?

2 different lecturers of mine had 2 different answer for this and both have experience in working with aircraft engine.

Which one is right? Requesting help from Technician or LAE. A brief explanation would be really helpful too.

The Wikipedia article is clear: engines are numbered sequentially, left to right, as seen by the pilot facing forward. That corresponds to the second of your diagrams.

Twin engined aircraft have just engines 1 and 2 on the port and starboard wings respectively.

Three engined aircraft follow the same convention with the number 2 engine in the fuselage centre line.

Since this appears to be an arbitrary convention I'm not sure what more explanation you're expecting.

Aircraft engines are ALWAYS numbered from left to right when viewed from the pilot's seat. Additionally, the start sequence is ALMOST ALWAYS number three, four, two, one. There are several reasons for this sequence: Number three engine starter distance from the battery(s) is the shortest The longer the distance the less amps delivered. Jet aircraft like the B-707, DC-8 had the pneumatic air connection close to the Number 3 engine. Once the number three engine was started it helped pressurize the pressure manifold for assisting the additional engine starts. Remember, a low start pressure could result in a hot start. Secondly, hydraulic pumps were located on the inboards #2 & #3 engines on the DC-4, DC-6, DC-7 & DC-8 as well as the B-707 (the B-747 had hydraulic pumps on all four engines plus an APU but the start sequence remains the same). It's never a good idea to have an engine running without full hydraulic pressure available to the brakes. Thirdly, passengers or cargo is loaded from the left side of the aircraft. By starting #3 & #4 first, last minute changes could more easily be facilitated with #1 & #2 dead. Boarding an aircraft behind an idling engine is always an interesting experience. Starting the #2 next would give additional hydraulic back-up and then allow the fire guard to move to the #1 engine and exit to the left. Lastly, by delaying the start of #1 & #2 engine, interior noise would be kept at a minimum for passengers and crew until all the cabin doors were closed. 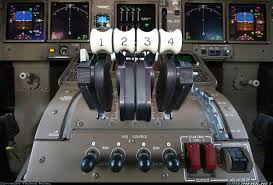 Not the answer you're looking for? Browse other questions tagged engine aircraft-operations or ask your own question.

6
Why is engine No.2 started first, instead of No.1?
0
Does the FAA allow a jet bridge to approach an aircraft that has engine #2 running?

4
How are aircraft filmed in sky?
11
Are engines fed differently in reduced gravity aircraft?
15
How are engines mounted onto wings?
1
How are the NEO LEAP-1A engines attached on the A320?
21
Why are all engines identical in typical commercial airplanes?
6
Why can’t the F28 be deiced with one or both engines running?
1
Why would larger aircraft have higher crosswind takeoff and landing limits than smaller aircraft?