Is it possible to determine the approximate climb rate of an aircraft knowing its top speed, engine power and weight?

Is it possible to determine the initial climb rate of a craft with a few key pieces of data such as top speed, engine power and weight?

For example the XB-42 was an experimental bomber design from the WW2 era. 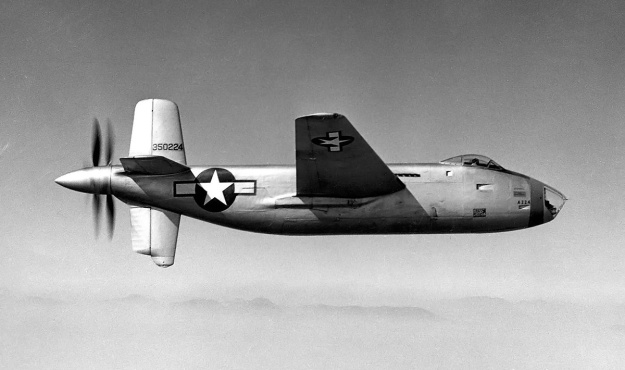 Its twin engines produced a total of 2,498 kW at takeoff and 2,834 kW using war emergency power.

Is that enough information to determine the approximate climb rate? Thanks so much for any help!

No, the top speed performance is not enough. To calculate any climb speed one needs to know at which flight speed this climb takes place. Per definition, the climb speed is zero at top speed.

Next, it helps to have some more information about the airframe. The wing's aspect ratio is an important factor because climb happens at lower speed when induced drag is a higher proportion of total drag.

So I need to make two more assumptions in order to find the climb speed:

Now for the climb speed calculation, which can already be found in several older answers: The flight speed for maximum climb rate is when induced drag is three times as large as zero-lift drag. The first step is to determine the correct polar point. This is a bit more tricky than it sounds because the zero-lift drag coefficient depends on the flight speed and air temperature. Let's start with 0.029 and see where that brings us to: $$c_{L_{opt.\,climb}} = \sqrt{3\cdot c_{D0}\cdot\pi\cdot AR\cdot\epsilon} = \text{1.48}$$ That corresponds to a flight speed of $$v_{opt.\,climb} = \sqrt{\frac{2\cdot m\cdot g}{c_{L_{opt.\,climb}}\cdot\rho\cdot S}} = \text{39.7 m/s}$$ calculated with the MTOW of the XB-42 of 15,060 kg. Now we can determine the ratio of the Reynolds numbers between climb and maximum speed which is 0.2915. If I assume that the zero-lift drag changes in proportion to $\left(\frac{1}{Re}\right)^{0.2}$, the zero-lift drag at best climb speed rises to 0.02907. Close enough.

Yes, but the process will be indirect. For a rough estimate, the engine power- which is the rate at which it can perform work- can be thought of as lifting the mass of the aircraft upwards against gravity. Since the units of power are foot-pounds per second and velocity is in feet per second, the engine power and the aircraft's mass can be used to solve for the climb rate in feet per second (be sure to use the right units for mass). this ignores airframe drag and propeller efficiency losses and as such yields an absolute upper limit for the maximum possible rate of climb. Your mileage will be lower!

Note that engine power depends on density altitude, and hence this estimate holds only for the density altitude at which the engine's power rating was measured & specified.

I would say you can make a pretty good approximation given the data you provided. What is missing is the engine thrust, but maybe you can find it somewhere in the internet, or make an approximation based on that you know that the speed was 660 km/h at 7,145 meters. Drag coefficients do also need to be obtained or guessed.

For sources on how to perform a performance calculation I would use the equations provided in Appendix B in ECAC doc 29, Volume 2.

As a professional you would use the BADA database from Eurocontrol for all performance calculations. Military aircraft is not included in the BADA-database.

To answer your question directly - NO, speed, HP, and weight are not enough.

A possible solution is to find weight, hp, and ceiling for it and another aircraft that are very close to each other. The ROC should be similar.

The XB-42 had a Service ceiling of 29,400 ft. You can also use this with the formula given below with a power curve that looks normal by eyeballing.

If you choose to try to calculate ROC, you will have to guess at the power available. 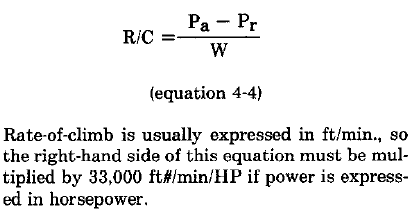 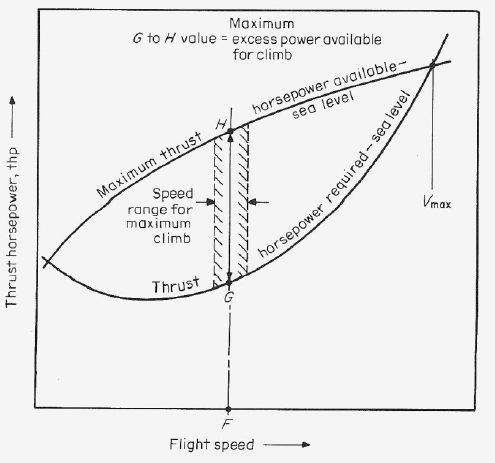 7
How can I calculate maximum rate of climb?
3
How close is the air resistance or drag force to being proportional to the airspeed squared?
5
How does climb-rate vary with density/pressure altitude?
6
Is there an aerodynamic force that would keep this experimental WW2 era prop from flying as fast as an early jet?
2
How far does an A320 travel horizontally while climbing to / descending from cruise altitude?
2
How can the zero-lift drag coefficient (parasitic drag) be calculated?

6
What is the relation between aircraft descent rate and speed?
12
Under what conditions can the maximum angle of climb be achieved for jet and propeller aircraft?
15
What is the difference between rate of climb and climb gradient?
17
Why is max endurance different for jet and props?
6
Under which conditions is full rated power instead of METO power required for takeoff (DC-3/C-47 with Pratt&Whitney 1830 twin wasp engines)?
2
Will this simple equation (pic attached) produce a rough estimate of the top speed of a prop driven aircraft?
1
How do I determine the engine thrust required to give a specific climb rate?
2
Commercial aircraft minimum and maximum climb angle and rate?
15
What is the commercial passenger aircraft top speed record?