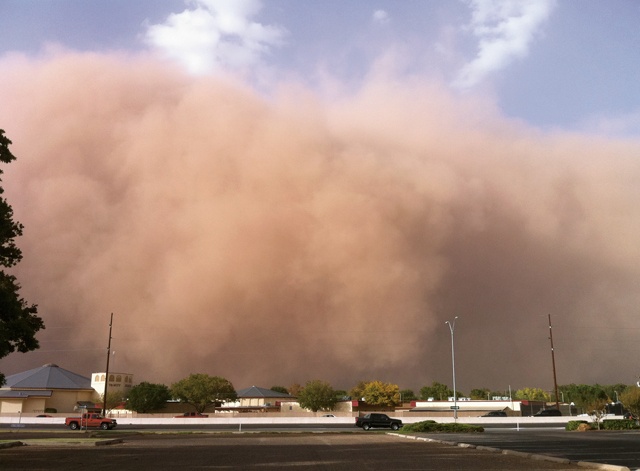 I live in West Texas where dust storms are an occasional fact of life. I am interested in how modern jet aircraft handle dust storms such as the one seen in the photo. From a pilot POV I can see that sand is no different than fog with high winds. However, from a mechanical standpoint, this is a high velocity abrasive being shot at the vehicle and through the engines.

How do modern airliners and their crews deal with a large sandstorm?

Would a standard weather briefing warn a pilot of the possibility of a sandstorm?

What would the appropriate action be for a pilot who suddenly finds themselves above a sandstorm in a piston or turbine aircraft?

How would a pilot judge when a dust storm is too dense to enter safely?

There is an interesting presentation on the impact of dust on aircraft here. And the Flight Safety foundation has a good article that breaks down a lot of aspects here and is worth the read.

It's not just the reduced visibility, but the associated high winds that can be a real danger for aircraft operating in a dust storm.

Dust storms pose a significant hazard for aviation. Not only do they drastically reduce visibility, they also are associated with very strong winds that can seriously affect an aircraft in flight. Engines can be damaged by ingesting the dust.

But as per your questions directly

How do modern airliners and her crews deal with a large sandstorm?

They most likely will avoid them as they would any heavy weather activity. The extremely reduced visibility might bring the airport below operational flight minimums, thus making an approach or departure impossible.

Would a standard weather briefing warn a pilot of the possibility of a sandstorm?

One main issue with dust storms is how fast they come up, and this can make them harder to predict than a storm that is rolling across a region.

It was a typical early summer evening in southern Arizona, U.S., this past July 5. At 1751 local time, the Phoenix Sky Harbor International Airport was reporting 10 mi (16 km) visibility with winds of 7 kt. But all that changed in a matter of minutes.

As for what to do when you find yourself over or in a dust storm check this article out of a firsthand account.

Yea, the simple answer is avoid them, but of course that's not always possible. With enough forewarning, maintenance crews would do their best to get aircraft in hangars, or evacuate them from the area altogether.

Standard weather briefings include current observations, and forecasts for your planned route and destination. Unless a sand or dust storm had been observed though, there is no guarantee that the briefer would provide any sort of warning for it. Here's more on the content of standard flight briefings.

Any reasonable pilot would not be judging whether or not the dust storm was too dense. If its recognizable as a dust storm, it should avoided.

Not the answer you're looking for? Browse other questions tagged weather extreme-weather or ask your own question.

25
How frequently do aircraft get struck by lightning?
16
How does a jet engine handle suddenly entering a lot of rain?
24
Is it difficult for a GA aircraft to escape a thunderstorm?
4
How do SIGMETs arrive in a cockpit on a modern longhaul flight?
12
How do airlines handle SIGMETS?
6
What is an “all-weather” aircraft?