In modern FMCs, flying an oceanic route requires inputting coordinates directly, often in obtuse formats (which are arguably prone to typos, but following proper procedure and a step through the route map generally prevent this being an issue).

Having said all that: modern FMCs are pretty clever, and they can (and regularly do) pull down data from the network, including in-flight weather data, for example. Why don't modern flight computers use this to also download oceanic route definitions if manual input is required rather than using a company route?

Much like 'Why can't flight management systems receive instructions directly from the controller?', the answer is it should be coming soon (mid/late 2020's).

FMCs are pretty clever, and they can (and regularly do) pull down data from the network.

You're right, but the issue is "the network". They do that already off private networks, as opposed to a common public network (Aeronautical Telecommunication Network). ATN is now at the heart of the data-link modernization.

Having the option to access and uplink common flight plans and routes to an aircraft's FMS should become a reality (Boeing): 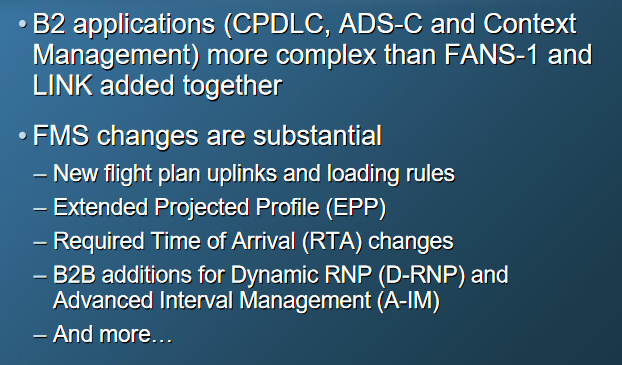 But as the above 2016 presentation shows (starting from the 'B2 Ground Deployment' slide), some old hurdles are still there. A 1994 Flight International article might shed some light on why it's been taking so long:

It is increasingly clear is that different regions, operators and manufacturers are going to find their way to the ATN by different routes via different steps, and that is giving rise to a variety of concerns. The most avid proponents of the ATN fear that some entities will become content with incremental communications improvements on the way and lose the desire to see the project through.

Airlines are reluctant to make the necessary investment until civil-aviation authorities (CAAs) make their intentions clear. In a classic chicken-and-egg paradox, however, the CAAs say that they cannot go ahead until they are certain which equipment the aircraft will carry in future. Exasperated service providers are reduced to pleading with the user community to do something, at least.

ATN has been a dream since at least the early 1990's, but reluctance is the reason. But whether the route is oceanic or not, the pilots are supposed to check the FMS entries whether manually typed in or uplinked.

Not the answer you're looking for? Browse other questions tagged fms oceanic or ask your own question.

9
Why can't flight management systems receive instructions directly from the controller?
5
How do planes receive their flight plan?

3
Why don't all flights use the North Atlantic Tracks (NATs)?
17
Why don't aircraft fly direct via oceanic airspace from UK to Iceland?