What does the Boeing 777 autopilot do after reaching the last programmed waypoint?

It is not clear to me whether the autopilot automatically disengages after reaching the final waypoint or whether it maintains (for example) a magnetic heading and altitude.

What happens after reaching the last programmed waypoint if the pilot does not intervene?

The first point I would stress on is that you don't program the autopilot. You program the FMS (Flight Management System), which looks like a very large calculator. In this picture it is the device under then first officer's hand. 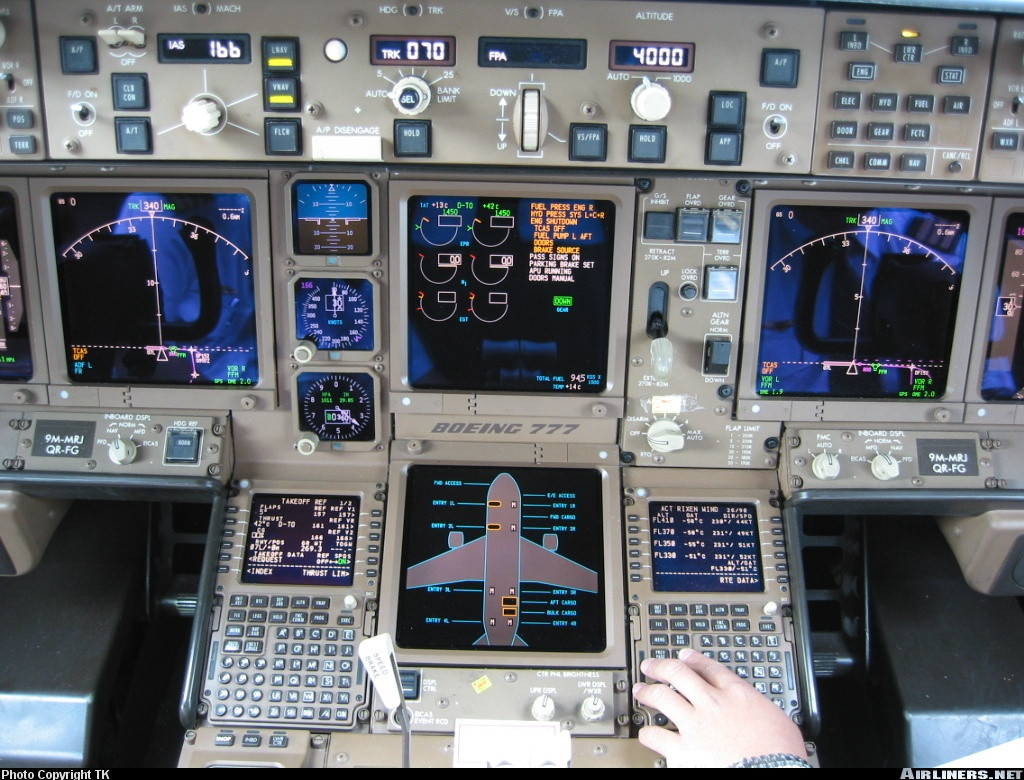 On top of the PFD (Primary Flight Display) you see the MCP (Mode Control Panel). This is what controls the modes that the autopilot system will follow, here is another image of it:

Typically the entire flight plan is programmed into the FMC and then during various stages of flight, the autopilot is engaged to help with navigation.

This flight plan includes the departure, enroute waypoints or tracks, and then generally the arrival at the destination; but that is it - it does not include the runway information, etc (as this may be subject to change).

The FMC takes this information and other data (weight, fuel, temperature, weather, etc.) to calculate a flight plan which is then displayed; and the pilot will then select and activate a flight plan.

At any stage of flight, the autopilot may be armed and engaged to do one of many things - either maintain thurst, or heading, or control the climb/descent; or follow the flight plan. It may also be disarmed during any stage of flight.

If the autopilot is armed and it set to follow the FMC's flight plan; then after the last waypoint it will follow the waypoint heading.

So, if the last way point is a holding pattern, it will continue on that pattern. If the last waypoint was a marker it will reach that marker, and then continue at that heading and speed; even though there are no more commands coming to it from the FMC (since its at the end of the programmed flight plan).

Note that reaching the end of the flight plan from the FMC does not disengage the autopilot; there are many other things that might do that though.

The last waypoint is usually at a holding pattern where the plane will fly in circles until the pilot disengages to continue to land.

For example in Helios flight 522 the crew got incapacitated and the plane ended up in a holding pattern for an hour until it ran out of fuel. This was a Boeing 737 but I imagine the 777 having the same.

When a Boeing Jetliner reaches the end of the programmed flight plan track with the autopilot engaged in Lateral NAV and the pilot does not intervene, (which is usually at a terminal aid (VOR or NDB) at the destination airport); the autopilot will remain engaged, however the tracking mode will default to the last flown track heading into the last navigation aid and the heading window will open showing the numerals. Pilot intervention is then required to change the heading or tracking of the aircraft as desired or instructed by ATC.

Not the answer you're looking for? Browse other questions tagged navigation autopilot boeing-777 or ask your own question.

6
How to hold the heading on the Boeing 777 autopilot?
7
What is the difference between Boeing 777-31H and Boeing 777-31H(ER)?
13
OBI, RMI, HSI... What combination do GA aircraft w/o glass typically have?
6
What mode is the Boeing 777's autothrottle in right after touch down?
9
Do pilots have procedures and safeguards against unintended altitude captures?
85
If a pilot ejects, what is the autopilot programmed to do?
7
What main landing gear actuator does the Boeing 777-300ER have?
6
Why does an A300/310 in LAND or GO-AROUND mode have to be at least 400 feet AGL for manual control column movement to disengage the autopilot?