Why are delta wings not commonly used in commercial airliners?

Delta wings are most commonly seen on military aircraft. I understand that delta wings are ideal for supersonic flight, and provide high maneuverability.

There's a thread on airliners.net about the same topic.

One of the most prominent and useful aspects of the delta wing is the fact that it increases an airplane's critical Mach number (the speed at which some air passing over any part of an aircraft - usually the wing - reaches Mach 1.0).

By increasing the critical Mach number, it makes supersonic flight much more feasible on delta wings than on conventional wings.

Delta wings are particularly happy even at a high AoA (angle of attack). This is because of the reaction lift generated by the wing, and the vortex created at the leading edge of the wing. Hence, airplanes with delta wings have a much higher tolerance to stalling. This makes it easier to attain higher vertical speed, also known as "rate of climb" safely.

But on the flip side:

One of the downsides of deltas is that they create more drag, because of the bigger surface area, but they do have a bigger internal volume (for fuel, for example) which could lead to a smaller fuselage, or more space in the fuselage for other things. Another disadvantage is higher landing and take off speeds.

The last point is particularly important. The Concorde's already small number of usable airports was reduced because the runways needed to be long enough to accommodate for the 160 KIAS landing speeds (for comparison, typical turbofan-based airliners lands at 130-140 KIAS).

Other disadvantages of delta wings I can think of is the lack of a flaps/slats system. Delta wings don't require flaps as they can simply reduce their airspeed by increasing the AoA, but the lack of flaps reduces their subsonic efficiency, and increases the takeoff distance and takeoff velocity. For instance, the Concorde's delta wings produced very little lift during takeoff prior to rotation, necessitating high takeoff speeds of nearly 220 knots!

As an answer to your second question, I could not find anything about regulations relating to the use of delta wings on airliners.

All in all, delta wings work well for niche purposes such as supersonic aircraft, but their disadvantages and poor operating economics make them impractical for subsonic flight.

However, as you can see here, the now-scrapped Boeing Sonic Cruiser attempted to make the best of both worlds by combining a conventional wing with a delta wing, to form a wide, "cranked-delta" wing design. 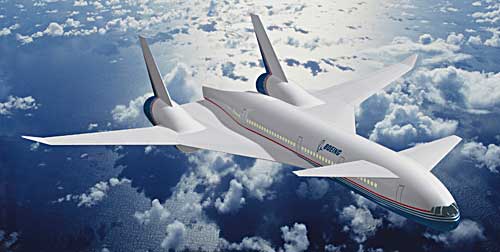 Generally, having as little sweep as possible is the best way to achieve high lift at low drag. Also, regardless of flight speed, a subsonic leading edge gives the best lift/drag ratio. If the sweep of the leading edge is higher than the angle of the Mach cone in supersonic flow, the flow around the leading edge is still like in subsonic flow, and this creates suction, thereby reducing pressure drag. If the cruise speed is Mach 2, the sweep must be bigger than 60 degrees, and with that sweep the lift at slow speed would suffer. Lift goes down with the cosine of the sweep angle at the same angle of attack.
Also, at high angle of attack the high sweep angle produces a vortex on the upper surface which reduces pressure (= increases lift) and prevents flow separation (= allows for higher angle of attack). Having more chord inboard helps to utilize this lift better and gives you more space for the wing spar and fuel, even with the low relative thickness that supersonic flow requires.

A subsonic airliner wing needs only moderate sweep to reduce Mach effects even with relatively thick airfoils (14% t/c versus 4% to 6% for supersonic airfoils), which gives you a lot of internal volume for fuel, the wing spar and high-lift devices. Going to a delta wing would help with gust sensitivity in low-level flight (that is why you see delta wings on subsonic aircraft at all), but it would increase the surface area and, consequently, friction drag.

FAR Part 25 would be the relevant regulation, and it (thankfully) leaves it to the applicant how conformance is achieved. The reason why you see no delta wing on subsonic airliners is purely technical.

If you take all together, the moderately swept-back cantilever wing with high-lift devices is the best way to fly Mach 0.8, and the delta wing is the best for flight at Mach 2.

The primary design driver of a commercial airliner wing is efficiency, and second to that is speed. While delta wings are good at high speeds, they are not very efficient. Also, while an airliner should certainly be maneuverable, they do not need to "do a barrel roll" or make 9G turns light a fighter jet.

This large area and high speed performance is at the expense of efficiency. The lift to drag ratio (L/D) of an F-15 is around 10, while commercial jets get over 16 (see this table for some examples). This shows the huge advantage that a non-delta wing has at subsonic speeds. Modern aerodynamics have allowed commercial airliners to reach high subsonic speeds (Mach 0.8-0.9) while remaining very efficient. While fighter jets use aerial refueling to compensate for burning more fuel, this would be a bit unrealistic for a commercial aircraft.

Low speed performance is also a factor. Both wings are able to use flaps and slats, but landing speeds for fighter jets are generally higher than commercial aircraft. Being better suited for high-speed flight, delta wings are less effective at low speeds.

As far as maintenance is concerned, there are fewer differences. Since the wingspan would be lower, this would put less load on the wings. Reducing the load could be turned into a maintenance advantage, but there are many more factors in determining maintenance cost.

Not the answer you're looking for? Browse other questions tagged aircraft-design commercial-aviation wing or ask your own question.

29
What is vortex lift?
19
What is the purpose of a dorsal fin such as on the Boeing 737?
19
Why do all new European fighter jets have delta wings?
15
What are the disadvantages of a delta wing biplane design?
8
Why do delta-wings perform so well on paper airplanes?
12
What are the advantages and disadvantages of a delta wing compared to a swept wing?
10
Why do delta wings generate less lift at a particular angle of attack compared to straight wings?
3
Is there a limit to the possible altitude for electric jets?

68
Why are commercial flights not equipped with parachutes for the passengers?
21
Why do (almost) all military transports have high wings and civilian transports low wings?
32
Why doesn't the Concorde have any wing fences?
12
Can a supersonic plane use a subsonic wing if the nosecone shock produces subsonic airflow around the wing?
9
If no low-speed compromises were made, what would an ideal Mach-3 wing look like?
2
Why are there so many aircraft designs which look generally profoundly similar?
8
Have bi-wings been used without creating more drag?