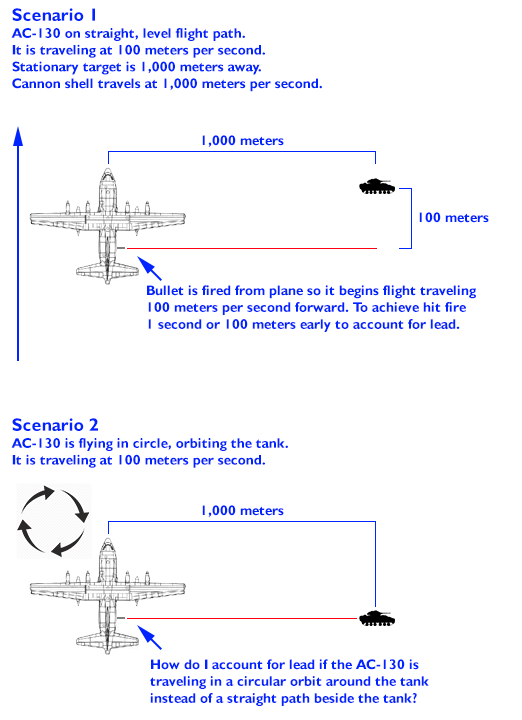 The heart of the question is whether or not it matters that the gunship airplane is travelling in a circular path. No it does not. All that matters is the aircraft's instantaneous linear velocity at the instant the bullet leaves the muzzle of the gun.

This Wikipedia page mentions a firing rate of 1,800 rounds per minute for one of the Gatling-gun weapons used on the AC-130U. Since there are 5 barrels, the rate of spin of the barrel assembly must one fifth of this figure, or 360 revolutions per minute. Assuming that each barrel assembly rotates around a circular path with a diameter of 8 inches, i.e. a radius of 4 inches (a wild guess), the instantaneous linear speed of each barrel due to this rotation is about 9043 inches per minute or 8.6 mph. This appears to be a rather trivial number compared to the flight speed of the aircraft. (To correct this estimate for a different known radius of spin, divide by 4 and multiply by actual radius of spin in inches.)

This is more of a physics question than an aviation one. As other answers say, the effect on the trajectory of the bullet is determined by just the instantaneous velocity. However, if the purpose of taking into account the effect is to calculate lead time, then circular travel will be different from linear. If you decide you need to fire 1 second earlier, then with circular motion the velocity of the aircraft when you otherwise would have fired is different from the velocity 1 second earlier. So with a tight circle, you can't just start at the time you otherwise would fire, take the velocity at that point, and calculate how much earlier you need to fire based on that. If you want an exact solution, you'll have to set up a formula for the bullet's trajectory and solve numerically.

Also, when you watch the bullet, it will appear to curve from your frame of reference (it's really you who is turning, but it looks like the bullet's direction is changing), which can make it difficult to learn to fire from a circling vehicle.