Can I use radar service instead of DME or GPS for this ILS approach?

At the top of this approach chart for KDNN in the briefing section, it is stated that "Simultaneous operation of I-DNN and GQO DME required."

If my aircraft is not RNAV/GPS or DME equipped can I fly the full ILS approach and rely on "Radar" to identify ROLTE INT (IF)? 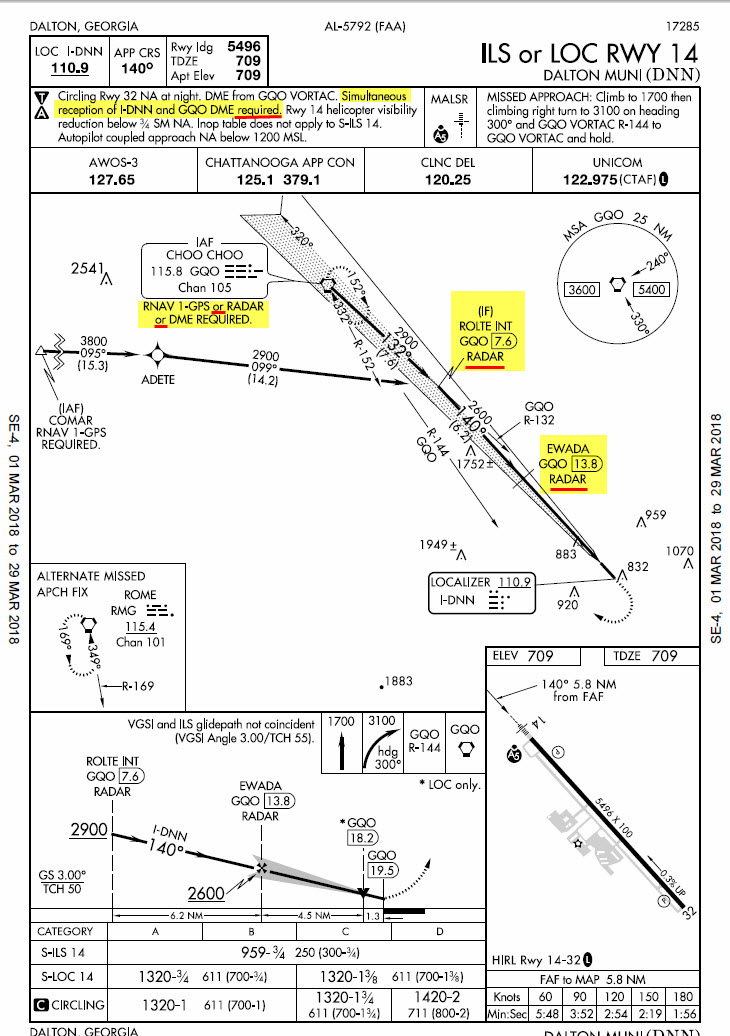 Tl;dr: This is really an edge case and I can’t come up with any specific wording that says “yes” or “no”. But from the following info I’d say you cannot unless ATC authorizes it.

Since the chart specifically indicates it as required it would be illegal to use the approach. Paragraph 5-5-4 a 2 of the AIM lists under pilot responsibilities:

But according to this answer ATC can approve an approach even when some equipment is inop. The answer seems to be concerning inop. NAVAID equip, rather than inop. equipment on the aircraft. Also, the section of the AIM he refers to (5-4-7d) does not include what he says. Paragraph 5-4-6d states:

This would suggest that ATC can approve an approach with inop. equipment.

If you consider telling you when you arrive at ROLTE to be “vectoring” then ATC can give you vectors as far as the FAF. FAA order JO 7110.65W, which gives instructions for ATC indicates in paragraph 5-9-1 a 2.

Note that where you have highlighted “RNAV 1-GPS or RADAR or DME REQUIRED” is on the IAF at GQO, but not on ROLTE. This would indicate to me that you can count on any of those to get you to the IAF, but not beyond it. The word RADAR on the chart at ROLTE and EWADA indicate that those fixes are depicted on the ATC radar screen. This would certainly make it possible for them to tell you when you’ve reached the fix, but I don’t know if you can count on them to do it. And without that or DME you would have no accurate way of identifying the FAF. They may not have time to monitor you after you’ve reached the IAF, so that’s why I say it would require ATC approval.

Not the answer you're looking for? Browse other questions tagged instrument-flight-rules approach instrument-procedures equipment or ask your own question.

11
Is it legal to fly the localizer approach when cleared for the ILS?

10
Where is a missed approach point for circling while flying ILS?
11
Why is radar required on some FAA instrument approaches?
9
Why does this GPS approach say "RADAR REQUIRED"?
15
Can GPS be used in lieu of DME for instrument approaches?
15
Can I circle to a different runway if cleared for an instrument approach without circling minimums?
5
Can a pilot transition from a localizer approach to an ILS approach?
8
Is a "GPS required" ILS (or other navaid-based) approach considered a "GPS approach" for alternate planning's sake when TSO-C129/196 gear is in use?
4
If an approach chart says "GPS required", do I need GNSS capability to fly it?
0
Substitute Suitable RNAV system for Inop Radar on approach “requiring” Radar
3
What should a pilot do upon reaching a Missed Approach Fix when holding instructions are not given?