Why is there a relationship between maneuvering speed and weight? [duplicate]

Could you explain the relationship between maneuvering speed and weight? Why are they linked?

Maneuvering speed is called corner velocity on the military. It is the lowest airspeed at which you can generate Lift equal to the aircraft weight times the maximum allowable load factor or "G". Obviously, a given specific aircraft configuration determines a specific Lift Coefficient function (specifying the lift coefficient for each angle of attack.) This function has a peak (the maximum value of the lift coefficient) which occurs at what is defined as stall Angle of attack (AOA). This stall AOA is the AOA that will generate the maximum lift available at any airspeed. But as Lift is a function of the lift coefficient times the airspeed squared, the higher the airspeed the more lift is generated at that maximum lift AOA. Below Corner velocity or maneuvering speed, as you increase AOA, the lift (and the Load factor or G-load) increases until you reach maximum Lift OA, then if you increase AOA beyond that point, lift decreases as the wing stalls.
Above Corner velocity or maneuvering speed, however, as you increase AOA, the lift,(and the Load factor or G-load) increases beyond the aircraft Maximum load factor or G-Load before you reach maximum Lift AOA, and you can overstress the aircraft.

The higher the gross weight of the aircraft, the lower the Load factor as a result of any specific amount of lift being generated by the wing (Load factor is of course Lift divided by gross weight). But it is the actual Lift (the forces), that produce stress on the structure of the airframe (wing spars, etc.) not the load factor. The airframe is designed to withstand a specific amount of stress (or lift force). SO, at higher gross weight, the allowable load factor (or aircraft G) will be lower, because the maximum allowable lift (which will cause the maximum allowable stress on the airframe) will generate a lower amount of aircraft G.

In the military we used a diagram called a Vn diagram. This is a graph of airspeed versus Aircraft G-Load at a specific gross weight. 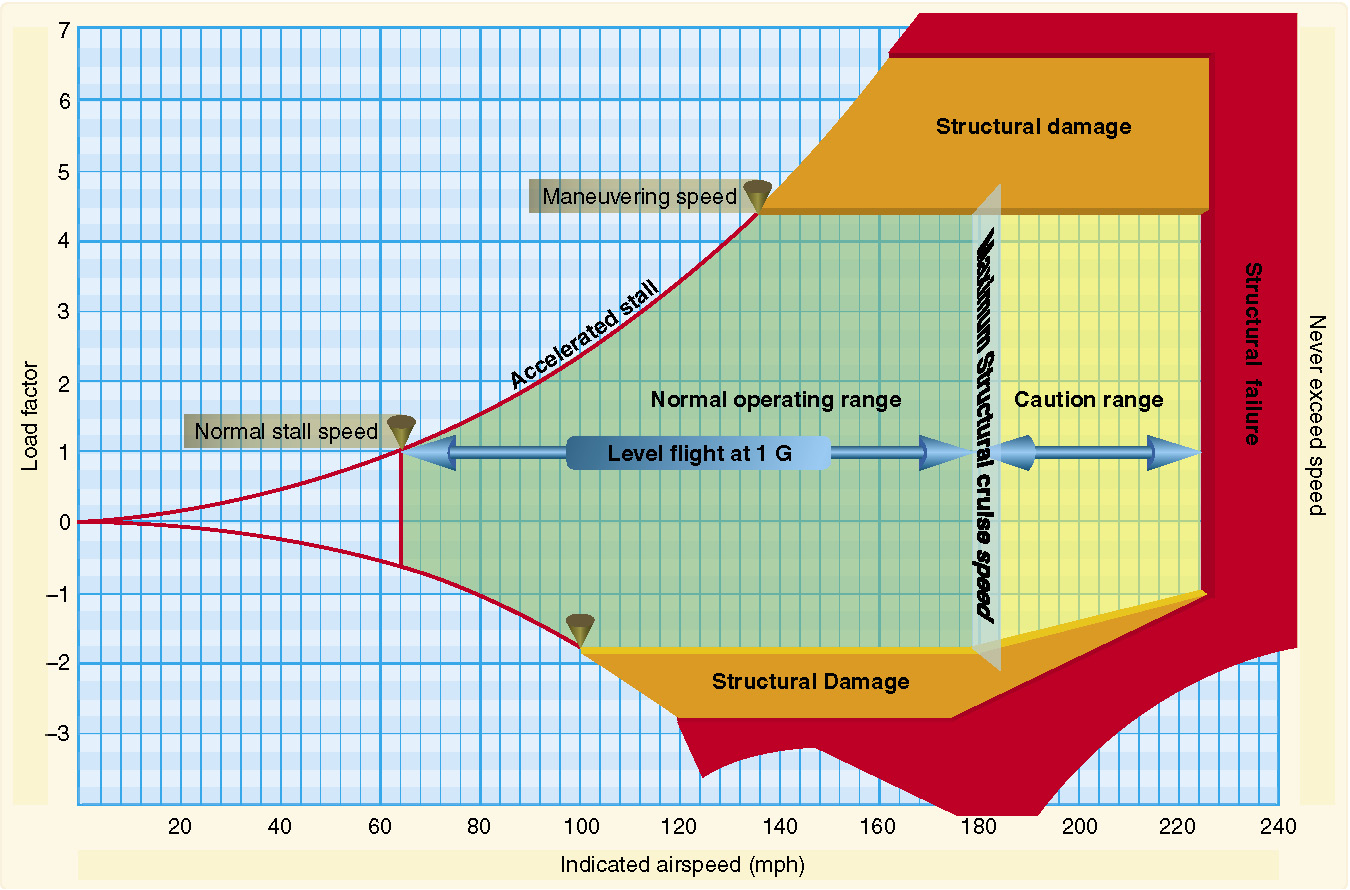 Because gross weight decreased the load factor at which maximum lift would be attained, there was a different chart for each gross weight. The higher the gross weight, the smaller the flight envelope became. The upper (maximum AOA) boundary moved down and to the right (since the same AOA at higher gross weight would produce less Load factor or aircraft G), and the upper horizontal boundary would also move down (for the same reason).

Further, if you think as maneuvers as simple turns (or pitch) around a given radius, you can calculate the acceleration by a = v^2/r, where v is velocity (speed) and r is radius. Therefore, high speed drives higher acceleration, which drives higher forces.

Therefore, it is a design trade off. If the same maneuvering speed is allowed throughout the weight envelope the structure must be stronger, which also makes it heavier. If a lighter air frame is desired, maneuvering speed can be reduced at higher gross weights.

Section 2.14.2 Maneuvering Speed of See How It Flies by John S. Denker explains the relationship between mass (not weight) and maneuvering speed.

Unlike $V_{NO}$, the maneuvering speed varies in proportion to the square root of the mass of the airplane. The reason for this is a bit tricky. The trick is that $V_A$ is not a force limit but rather an acceleration limit. When the manufacturers determine a value for $V_A$, they are not worried about breaking the wing, but are worried about breaking other important parts of the airplane, such as the engine mounts. These items don’t directly care how much force the wing is producing; they just care about the acceleration they are undergoing.

This means you should put $V_A$ along with $V_S$ and $V_Y$ etc. on your list of critical airspeeds that vary in proportion to the square root of the mass of the airplane. However, $V_A$ depends on real mass not on weight, so unlike the others it does not increase with load factor.

Later in the same section, the author clarifies.

Finally, we should note that there are two different concepts that, loosely speaking, are called maneuvering speeds.

12
Why does maneuvering speed vary with weight?

7
What is the relationship between power and fuel efficiency?
2
What is qualitative relationship between surge line, stage characteristic and throttle characteristic?
13
Why is it not a good idea to climb higher than a level at which you would have a cruise weight-climb speed less than 500 ft/min?
1
Is there a difference in aerodynamic efficiency between single engine and twin engine airplanes?
3
Why is the thrust/drag increase much lower at a lower FL with weight the only variable?
5
Do all airplanes have the same turning radius when operating under the same conditions regardless of size and weight?
2
How can I calculate the relationship between propeller pitch and thrust?
4
In this F-104 V-n diagram, why does the stall speed (in terms of IAS) decrease with altitude in some parts of the flight envelope?