Can regular emergency exits not work after crashlanding?

Live accounts of survivors of Bangla Air 211 mention getting out after breaking windows but not out of the emergency exits.

My question is can regular airline exits not work in such cases?

All regular exits are generally used in an emergency. This information would be included on the safety card and in the briefing by the crew before the flight.

Of course, during a crash, structure can deform and exits can become blocked. Regulations require evacuation within time limits using only half of the available exits. This must be demonstrated to be possible.

Here is a Q400 safety card, showing that two forward and two aft exits are used for evacuation. The forward right exit (called R1) is an emergency exit. 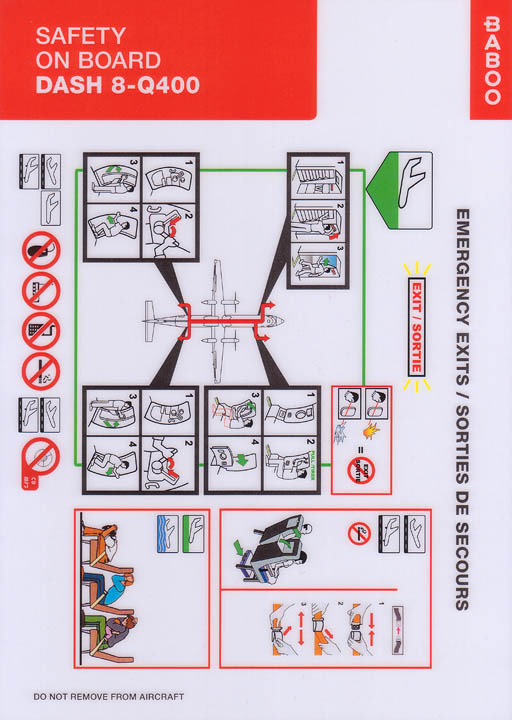 Well the short answer is, it depends. As already noted in a comment, an aircraft’s structural integrity can be jeapordized in the event of a crash landing. This primarily comes down to the impact itself. How powerful was it? What forces acted upon impact? Did these forces impact the emergency exit or its frame? Emergency exits, just like any part of an aircraft, are not indestructible; even a block box can be severely damaged due to some impacts for that matter. With that said, let’s say the aircraft in this scenario has 6 emergency exits. If the first three do not open after a crash landing, it doesn’t necessarily mean the other three won’t. Think of it similarly to a car accident. Whether or not the doors open after the impact relies solely on whether or not the door itself, the door jam, or the mechanism opening the door were damaged enough for it to not open due to the force of the crash and whether or not those forces acted upon any of these factors. Like an aircraft, just because the driver door in a car doesn’t open in a particular accident doesn’t mean the passenger door won’t and vice versa.

Not the answer you're looking for? Browse other questions tagged aircraft-design emergency accidents or ask your own question.

13
Can I find out why an aircraft squawked an emergency code (7x00)?
9
If a warning emerges, why not land as soon as possible?
21
Do you have to explain what your emergency is?
26
Is there any emergency situation in which jet engines would not be shut down before passenger evacuation of a transport aircraft?
3
Do carriers such as Janet Airlines carry ADS-B transponders?
34
Why can't you ditch your aircraft in the sea?
48
Can ATC handle a flight as emergency although the pilots have not declared an emergency?