How often does an autopilot update control surfaces' positions?

How often does an autopilot update the position of the ailerons (or any other control surface) during cruise? Per second, per minute, or something else?

So often that to any observer (visual or tactile) it appears continuous.

According to the paper Reconfigurable autopilot design for a high performance aircraft using model predictive control, each control surface is updated at a different rate depending on the needs of the overall system. What they used in their experiments (and is most likely not the same in every aircraft because they will test to see what is required) is as follows: 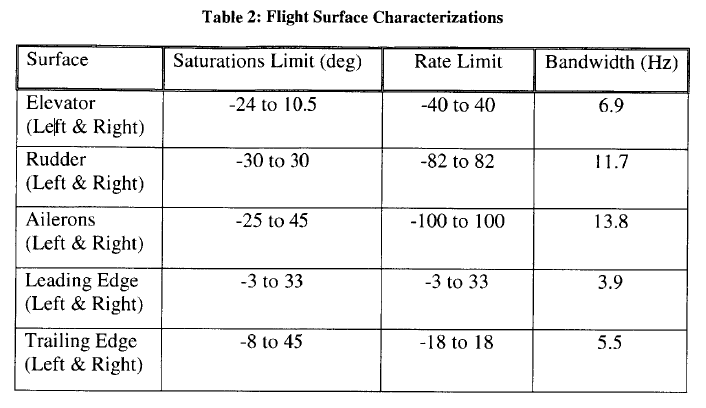 This is a fixed value selected during the system design, and does not change based on the phase of flight (so it would be the same whether in cruise or in the landing configuration).

This is not only an Autopilot-specific question but also a design-specific question, which will be different based on the OEM (Original Equipment Manufacturer) and the Aircraft Specification.

Usually in modern aircraft, the Autopilot sends commands to Flight Control System which then sends commands to Actuators and this progression of commands happens at different rates. This update rate could be, for example, 100 Hz (10 ms), 80 Hz (12.5 ms) or may be even slower or faster, depending on the flight control system of the aircraft.

So, the command is not sent per second or minute, but rather 100's of commands per second, because commands to move the control surface are the most critical commands on an aircraft.

Well I remember doing a night flight from Japan to Uk over russia in a JAl 747 and a perfect view of the wing, and night start et all..

And one thing I noticed was that the inner airelon moved once every four seconds as in a change, next, next, next no predictable will be up or down or whatever way.. just a maybe 10cm movement or less, continuously.. was a joy to watch and some PID controller.. http://en.wikipedia.org/wiki/PID_controller

It depends on the manufacturer and model.

Although it's possible to create an autopilot that updates real-time/continuously, not all autopilots are actually designed to do so. Some autopilots (particularly older ones) updated once a minute, sometimes even slower. There are several logical reasons to do this - one is to conserve power, the other is to lower cost - slower computers used to be significantly cheaper than ones that were fast enough to compute real time. It's also simply unnecessary to continuously update the control surfaces. So say you drift a couple hundred feet off course because the wind changed, the autopilot will correct within the next minute, and you'll end up continuing on merrily and you (as a pilot or passenger) would not have noticed. The only time you need continuous updates to the control surfaces and engine speed, is during landing, and if I'm not mistaken, there's isn't a fully autonomously landing autopilot on the market (for civilian planes anyhow).

In fact, an autopilot that continuously updates the control surfaces may end up creating a jerky flight because it's constantly auto-correcting for wind gusts and changes in wind direction.

9
Is trimming aircraft to relieve pilot of applying force on control stick/Pedal still applicable?
8
Does the autopilot attempt to recover from a mechanical failure of a single control surface?
10
In an aircraft with tab-flown control surfaces, how can a jammed surface be detected during preflight examinations or flight control checks?
2
How does an auto-pilot control altitude changes?
12
Airbus control architecture - where does the actual autopilot live?
2
What is a minimal step angle deflection for flight control surfaces?
6
What sort of sensors are used for sensing the positions of the control surfaces for the ECAM F/CTL page on Airbus aircraft?
6
Why does an A300/310 in LAND or GO-AROUND mode have to be at least 400 feet AGL for manual control column movement to disengage the autopilot?
6
How are the 737’s elevator and aileron cables attached to their control tabs without impeding the control surfaces’ motion under hydraulic power?
0
How do I set up G1000 GFC700 autopilot for takeoff?