What is the difference between a turbofan and a turboprop engine?

I'm not an aircraft expert and I just realized that there are two different terms - turbofan and turboprop. I always had them combined in my head as a term for a large jet engine (like you would see on a 747). Apparently this is not the case though. So what is the difference between them? Are there other types of "turbo" engines?

Both engines use a turbine for power. This is where the "turbo" part of the name comes from. In a turbine engine, air is compressed and then fuel is ignited in this compressed air. The energy produced by the ignition turns the turbine. The turbine is then able to drive both the compressor at the front of the engine and also some useful load. In airplanes, it produces thrust.

The first jet engine was a turbojet. This is a simple turbine engine that produces all of its thrust from the exhaust from the turbine section. However, because all of the air is passing through the whole turbine, all of it must burn fuel. This means it is inefficient, and the solution is the turbofan. 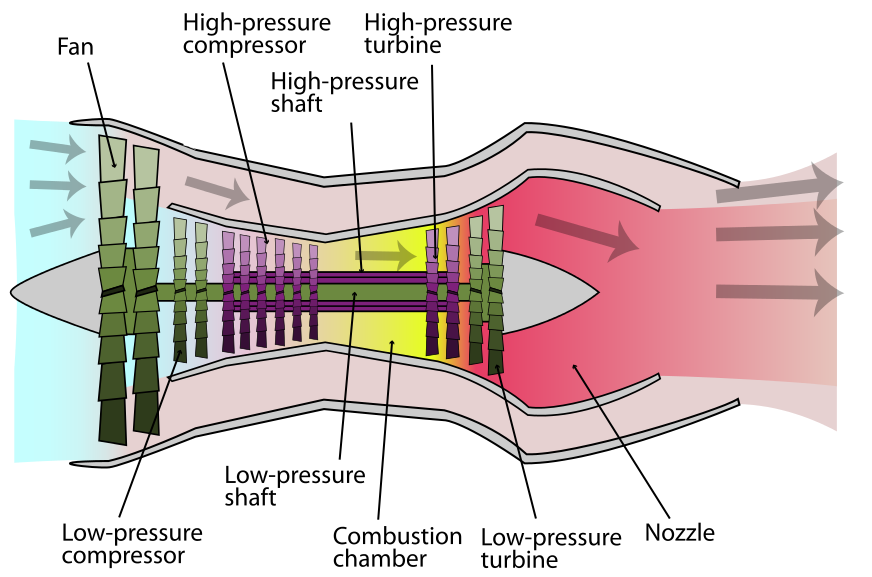 In a turboprop, the turbine primarily drives a propeller at the front of the engine. There is no cowl around the prop. Some air enters the turbine, the rest does not. The propeller is geared to allow it to spin slower than the turbine. Although this diagram shows only a single shaft, many turboprops have two, with a high pressure shaft driving the compressor and a low pressure shaft driving the propeller. Some engines such as the popular PT6 also reverse the flow direction multiple times. 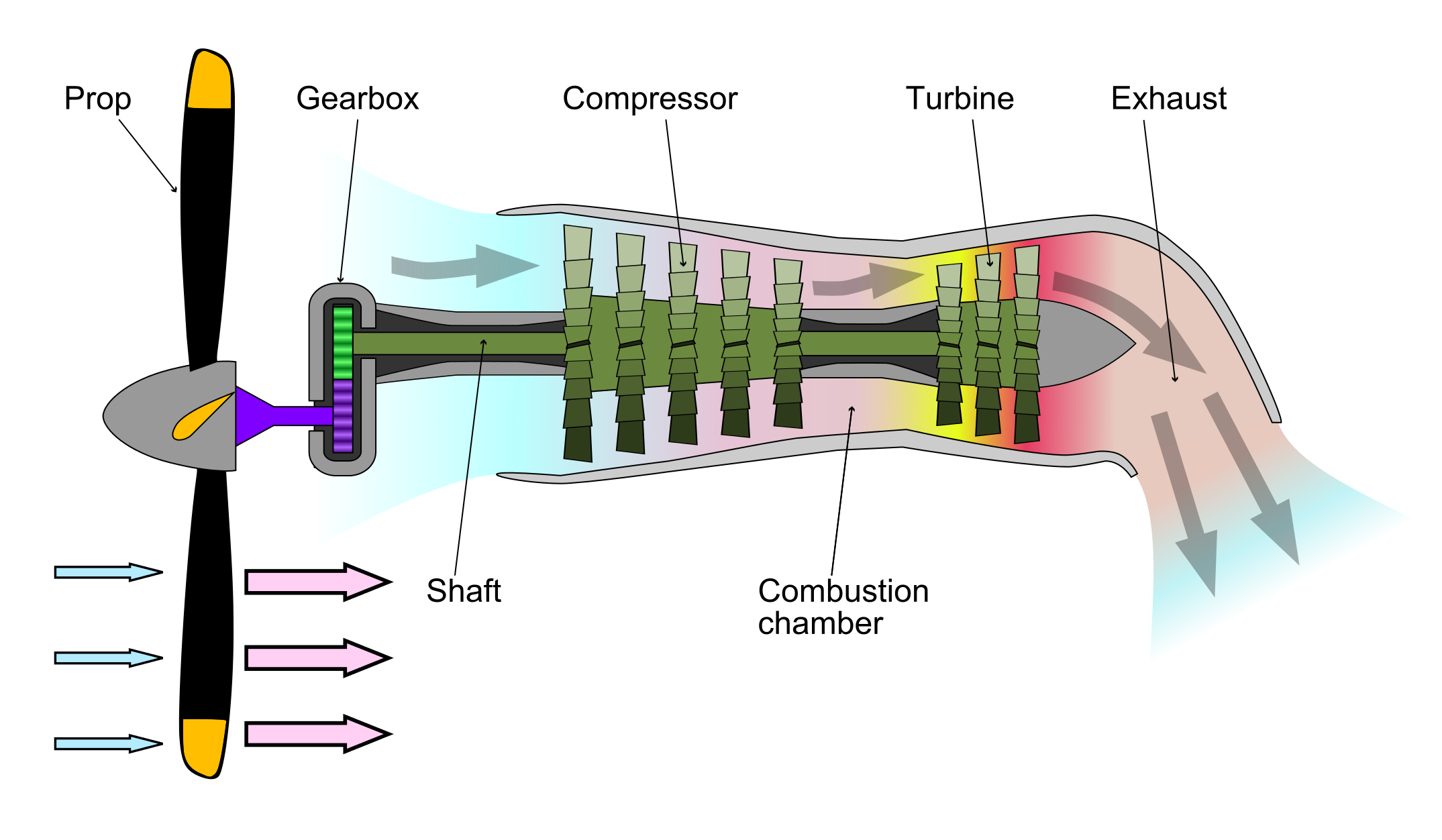 Turboprops are more efficient at lower speeds since the prop can move much more air with a smaller turbine than the fan on a turbofan engine. The cowl around the turbofan's large fan allows it to perform better than an open propeller at high speeds, but limits the practical size of the fan.

At supersonic speeds, turbojets have more of a performance benefit. They develop all of their thrust from the high velocity turbine exhaust, while turbofans supplement that with the lower velocity air from the fan. Since the air from the fan is also not compressed nearly as much as the core turbine flow, it is also harder to prevent the flow from going supersonic and causing losses.

The Concorde used turbojets because it was designed to cruise for long periods at supersonic speeds. Modern fighter jet engines are turbofans, which provide a compromise between efficiency and speed.

There are other benefits and drawbacks between turbojets, turbofans, and turboprops, but I think they are beyond the scope of this question.

Work has been done on creating a "propfan" engine, in an attempt to get the efficiency of a turboprop and the speed of a turbofan. They have yet to come up with a viable design. 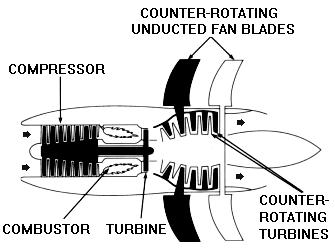 Elsewhere in aviation, turbine engines are used in

Turbines also find use outside of aviation in power plants (to generate electricity), and even vehicles (like the Abrams tank).

Turbocharged piston engines use a turbine much differently from the examples above. Instead of being the primary power source, the turbine only assists the piston engine. A turbocharger uses a turbine to compress air sent to the engine intake. The increased compression helps the engine generate more power. The turbine of a turbocharger is driven by engine exhaust gasses, and a supercharger is similar but is directly powered by the engine. See the Wikipedia page for more detail.

Further to above answer.., Check out this link to see inside of an engine http://animagraffs.com/inside-a-jet-engine/

Turbofan is the most efficient engine and most of the thrust is produced from the bypass air. The efficiency of the engine mainly depends on the engine bypass ratio. Turbojet is mainly used on the fighter or acrobatic aircraft. These aircraft’s thrust is further increased by the “after burner” installed at the nozzle of the engine.

Not the answer you're looking for? Browse other questions tagged jet-engine engine turboprop or ask your own question.

2
How does a turboprop engine work?
2
Are there any differences between turbofan and turbojet engines besides bypass air?
40
What are the differences between fuel types (comparing with vehicles)?
25
Given the same engine, why install a gearbox on a turboprop but not on a turbofan?
3
Why are the Boeing 747-8 engines on the wings spread apart?
5
Is a subsonic scram-jet reasonable?

15
What are the differences between pre-transistor and transistor era jet engines?
9
What are the reliability statistics for modern jet engines?
19
Are turboprops more efficient than piston engines (thrust per fuel consumption)?
6
Are there turbofan/turbojet analogues to a centrifugal-compressing jet engine?
4
How does engine exhaust temperature affect contrail formation and why?
2
Has a jet "engine" ever been made that only uses the thrust from the bypass air and doesn't have a combustion chamber?
8
Is it incorrect to refer to a C-130 as a jet?
7
Why does taxiing produce large lateral loads on the 747's engine pylons?
2
Can aircraft ferry engines for other types of aircraft?
10
What exactly is the pressure thrust component and why does it exist?