How to carry out a CFD simulation for determining the stability derivatives of an aeroplane?

I want to create a 3D model of an aircraft to determine the stability derivatives by using a computational fluid dynamics (CFD) simulation. I tried to google for tutorials that explain how it is possible to carry out a CFD simulation for determining the stability derivatives of an aeroplane but was not successful. I would be glad if someone could give some resources that explain the procedure. It would be great if the CFD software would be ANSYS Fluent.

Make a list of the derivatives you want to determine. All of them will be derivations of some force or moment with respect to some parameter or control setting. Now set up your CFD such that you get lift, side force and drag as well as pitching, rolling and yawing moment relative to the center of gravity.

Next, make those forces and moments dimensionless. Forces are divided by a reference area (projection of the wing area in most cases) and the dynamic pressure (speed squared times air density divided by 2). Moments are in addition divided by a reference length (span or semi-span for rolling and yawing moment, mean wing chord for pitching moment). The results are called coefficients. Record those coefficients for a baseline configuration (say, level flight at cruise speed).

Now make a small change in the parameter (angle of attack or sideslip, speed, air density, pitch-, roll- or yaw-rate) or control setting (elevator, rudder or aileron angle, flap setting, power setting) and record the coefficients again. Only one change at a time and leave all others at their baseline position! The desired derivative is simply the gradient of the coefficient over the gradient of the parameter, as in $$c_{M\alpha} = \frac{c_{M1}-c_{M0}}{\alpha_1-\alpha_0}$$ with 0 denoting your baseline figures and 1 the changed ones. Use radians for all angles. The rotation rates you should make dimensionless by dividing the value by the flight speed and multiplying it with the respective reference length. And another thing: The really correct reference length for the pitching moment and -rate is the mean aerodynamic chord which is the integral of chord squared over span, divided by wing area.

To do this manually, carry out a tremendous amount of bookkeeping and use books about pre-desing of aeroplanes, such as my goto book of Torenbeek.

To let a computer program compute the stability derivatives: Openvsp.org consists of a vehicle sketcher and a couple of programs that do computation of wakes, lift, drag, moments etc. Originally developed by NASA and now under open license.

Procedure: sketch your vehicle and use vspaero for computing the coefficients. The sketch configuration can be exported to formats suitable for pure CFD. 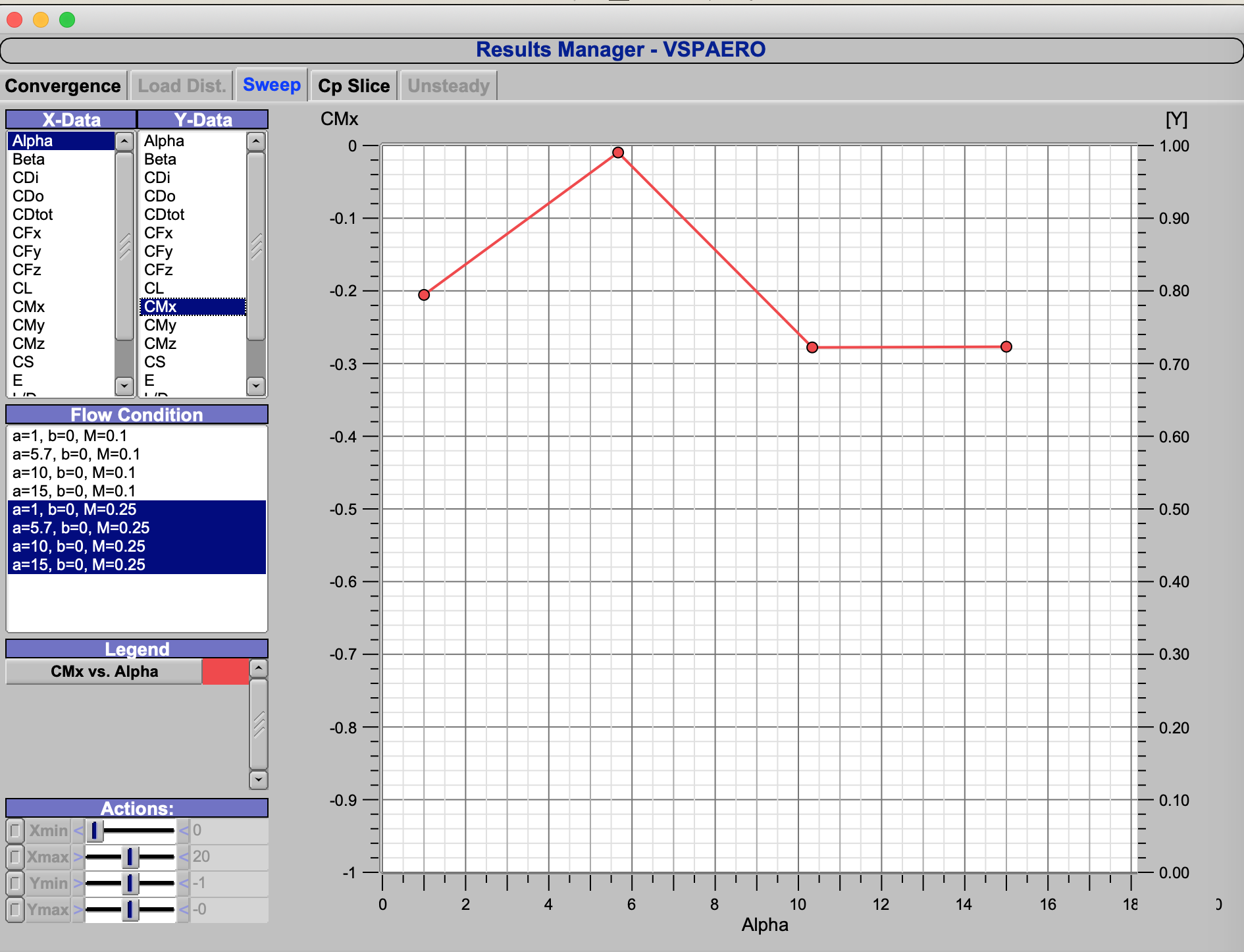 Not the answer you're looking for? Browse other questions tagged aircraft-design stability fluid-mechanics or ask your own question.

10
Longitudinal stability of airships: How is the critical speed defined?
8
Can the design for neutral stability reduce trim drag?
5
How is the lift generated by a number of out-of-plane staggered wings calculated?
6
Does CG location affect the stability of the Dassault Falcon 7x while on the ground?
6
What is the relation between aircraft stability and control?
4
What are the relations between stability, controllability and maneuverability?
1
How to calculate the location of C.G. A.C. & N.P. in static longitudinal stability?
1
How does a pilot maintain stability for an unbalance loaded airplane?
3
Under what circumstances is the Aircraft 'Stability-Axis' system used in either design or analysis of aircraft?
6
How does the ground effect affects longitudinal stability?