Do Federal Regulations really require compliance with all crewmember instructions?

On commercial flights, we're frequently told that all passengers are

"required to comply with lighted signs and placards, and all crew member instructions".

These rules seem to say passengers only have to follow instructions regarding Smoking, and Seatbelts.

Is there some specific, Federal Rule1, other than catch-all 91.3, that requires general compliance with all instructions?

What if I want to leave my tray table down? Or keep my electronics on? Or put my feet in the aisle?

1Not a contract of carriage with the airline

I found an overview from a lawyer on what "interfering" actually means. The short version is that there's no regulation or law that says "you must obey all instructions". Instead, they say "you must not interfere" and that's interpreted very broadly.

She based the article on one regulation and one law:

No person may assault, threaten, intimidate, or interfere with a crewmember in the performance of the crewmember's duties aboard an aircraft being operated under this part.

The lawyer's analysis is that not following an instruction would be a violation of the regulations (civil penalty). If you go further and physically interfere with a crewmember that would be assault (criminal penalty).

When it comes to instructions specifically, she says that "interference" can be interpreted very broadly (emphasis mine):

Almost any offensive or disruptive behavior that distracts the crew can be considered interference, such as:

Her basic advice is to follow all instructions if possible and never touch a crewmember:

Any time you disobey a crewmember’s instructions, you run the risk of violating federal law. But civil penalties and criminal prosecutions usually result only when passengers repeatedly ignore, argue with, or disobey flight attendants; or when they act out in a way that is dangerous.

You can see the FAA's enforcement statistics on this, by the way. Interestingly, it seems that the number of cases fell sharply in 2005 and has been trending down since then.

For U.S. Air Carriers FAR Part 121 requires passenger compliance with specific instructions as specified in subparagraph (k) shown in the excerpt below: (here is a link to the entire regulation shown below) 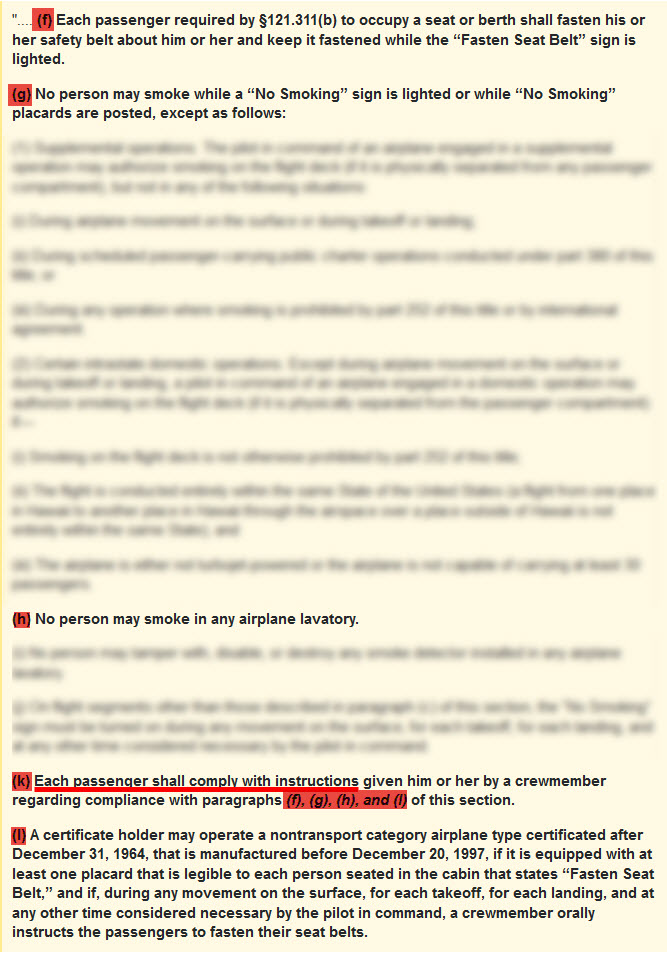 Title 49 U.S. Code Section 46504 states that interference with the duties of flight crew members and attendants can result in a fine and up to 20 years in prison. This means anything that interferes, including refusal to stow a carry on, non compliance with safety briefing instructions, refusal to be seated when the seat belt sign is on, any disruptive behavior. Nothing like this is tolerated and Will result in removal from the aircraft by the crew, customer service or armed airport security.

17
Why is the sound quality of onboard public address so bad?
14
Who decided that the Boeing 737 MAX planes that were airborne when the grounding was issued cannot enter and land in EU air space?