What twin engine is this USAF-painted plane?

I keep trying to identify a group of aircraft, what bimotor is this plane? 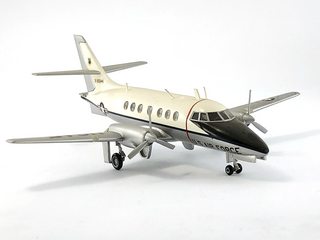 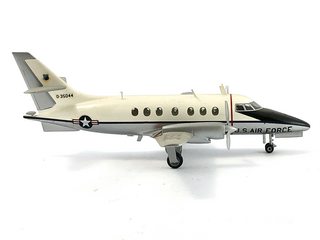 It appears to be a British Aerospace C-10A or Jetstream 3M.

In order to improve sales prospects in the US, the fifth prototype was fitted with the US-built Garrett TPE-331 in place of the French Astazou. Changing to the US-built engine was enough to allow the United States Air Force (USAF) to consider it for cargo use. It eventually placed an order for 11, fitted with a cargo door and accommodation for 12 passengers or six stretcher cases, to be known as the C-10A, or Jetstream 3M. The USAF cancelled its order in October 1969 citing late delivery.

and it sounds like none may have been actually built.

In the 1980s I remember them being a successful civilian commuter design. However, they were slow compared to the Fairchild Swearingen SA-227 Metroliner, a major competitor, and suffered from a lack of baggage capacity. They somewhat mitigated that by having an optional belly cargo carrier on them, but that slowed them down even more.

I was flying the SA-227 at the time for Horizon Air. Over the route from Redmond, Oregon to Portland, Oregon, the Jetstream (I can't remember the carrier's name—they eventually ceased operation), would leave a few minutes before us, but we would always overtake them and land in Portland before them.

For a time, over routes they shared with us, they would send the bags they couldn't carry over to us under a reciprocity agreement since we had ample baggage capacity. Eventually Horizon Air required them to pay since it was turning out to be a one way agreement, they never having any spare baggage room.