What were the procedures to follow in US Airways Flight 1549 during descent?

In the documentaries, and in the texts about the US Airways Flight 1549, procedures and checklists are mentioned and shown as a good example.

What procedures were they following in that case, and what could have gone wrong if they were not followed?

17 seconds after bird impact, they used the "QRH Engine Dual Failure checklist" as per the NTSB report at:

Even though the engines did not experience a total loss of thrust, the Engine Dual Failure checklist was the most applicable checklist contained in the US Airways QRH, which was developed in accordance with the Airbus QRH, to address the accident event because it was the only checklist that contained guidance to follow if an engine restart was not possible and if a forced landing or ditching was anticipated (starting from 3,000 feet). However, according to postaccident interviews and CVR data, the flight crew did not complete the Engine Dual Failure checklist, which had 3 parts and was 3 pages long. Although the flight crewmembers were able to complete most of part 1 of the checklist, they were not able to start parts 2 and 3 of the checklist because of the airplane’s low altitude and the limited time available.

The "procedure" that the captain followed was the mantra taught to student pilots very early in their training: aviate, navigate, communicate. The ultimate priority in all flight circumstances is to first fly the aircraft. By realizing that 1) continued flight was impossible, 2) attempting to restart the engines was futile, and 3) deviating to the softest and least congested improvised landing site was necessary, in fact in these circumstances the best possible option, the captain saved his own life and the lives of his crew and passengers.

The captain was almost a 20,000 hour pilot at the time of that accident and the first officer had accumulated over 15,000 hours of pilot time. This cannot be understated. This was an extremely experienced flight crew.

In many years of dealing with imminently life-or-death circumstances, I have seen two categories of people: those who act and those who freeze. Obviously, the crew in this situation was composed of people in the former category. That is the category in which I place myself, but thus far almost all of the life-or-death circumstances I have faced have been ones I have trained heavily to mitigate. My actions have been almost reflexive based upon that training, but in my craft I am also well over the 10,000 hour mark.

The ultimate answer to your underlying question of how did this flight end successfully is the right kind of experience of the flight crew, and this cannot be summarized in a checklist or procedure. They knew how to fly. They intimately knew the systems of their aircraft. Most importantly, they worked together as a team to accomplish the mission even though that mission had changed significantly since the time when they were cleared for takeoff.

The A320 "non-normal notes" state the following:

If time is short due to loss of thrust at low altitude, a “quick“ ditching procedure is available on the back of the normal checklist. This procedure gives you a suitable configuration for ditching (CONF 2, Gear up) and a table for determining a suitable approach speed given your gross weight. It also instructs that the APU be started, the ditching button be pushed, provides guidance for the flare (minimise VS, attitude 11°) and provides instructions for shutting down the engines and APU on touchdown (all masters off).

The ditching performed by flight 1549 would be considered a quick ditch, though there was some debate over this fact and, resultingly, whether the correct procedure was followed. If time had permitted, the crew would have completed a procedure similar to this one in the QRH: 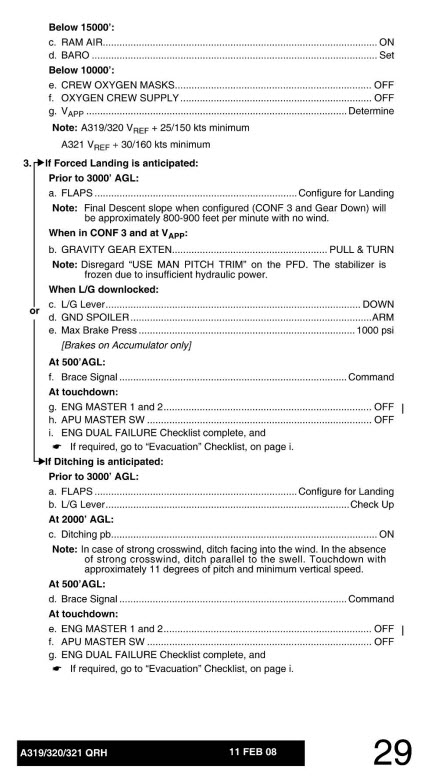 Since there was probably not time to pull that book out and leaf through it, the (arguably) correct action was to work the forced landing / ditching procedures on the back of the normal checklist which will include the details quoted above.

Note that I've tried to provide the Airbus manual here. The exact checklists usually vary from airline to airline and airlines will often publish their own QRH as well. I don't know for sure which checklists or handbooks were present in the A320 involved in that incident but chances are they had at least nearly the same content as the Airbus variant.

I don't yet have an answer to what could go wrong but I'll get that a bit later. One thing off the top of my head is that if the pilot had not activated the much-celebrated ditch switch then the plane would likely have flooded faster and maybe there would not have been time to evacuate.

Not the answer you're looking for? Browse other questions tagged emergency-procedures checklist or ask your own question.

6
What should a pilot do to perform a successful emergency water landing?

8
Is there a best-practice method to work through a checklist?
13
Does the FAA have a best practice for highlighting memory items on a checklist?
6
How many emergency/abnormal checklists are there for a typical airliner?
19
What is the brace position for cockpit crew?
3
Why isn't the application of “carb heat” in initial piston multi-engine failure emergency procedures?
5
Do airline pilots use speed stability to cope with unreliable airspeed indications? If not, why not?
1
What were the Concorde's emergency procedures for an uncommanded droop-nose extension in flight?
12
What are the ejection injury and fatality rates?