Does wing sweep affect the direction of lift?

Given both a straight and swept wing (identical otherwise), exposed to the same airflow, would the direction of lift be the same? Please see below a crudely drawn example of my thinking. 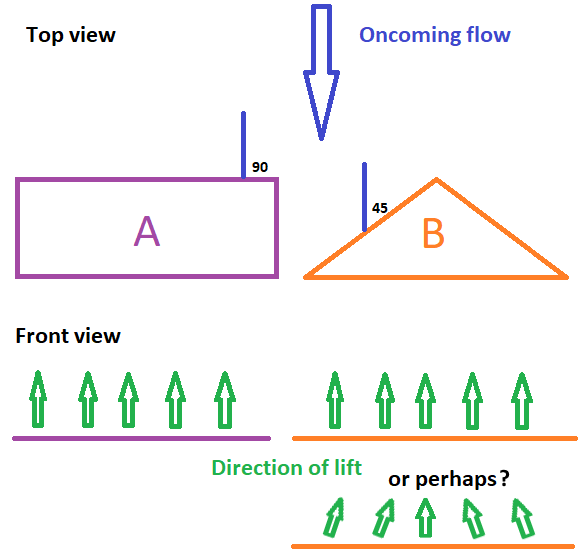 The individual forces (acting on each point of the surface, including the wing), if pictured as a distribution of force over the surface, are always normal to or perpendicular to the surface. So if the wing has dihedral, then they are indeed angled in towards the fuselage. But in your "perhaps?" illustration, with a wing with zero dihedral, they would all be pointing straight up.

Considering that the lift, together with drag and side forces are the resultant of the distributed air pressure on the surface, their definition highly depends on the axis system used. For example, the lift is defined as projection of the resultant force of the distributed pressure into the plane of symmetry, perpendicular to the flow direction. So, the lift direction is defined by the symmetry plane and flow direction, and change of lift direction with sweep, dihedral, or other wing parameters are meaningless. But, it should be said how the pressure distribution changes with the variation of wing parameters.

4
What factors determine the direction of the resultant force vector?
1
Why is the angle of attack not proportional to the stagnation point?
2
Why does the effective alpha/CL increase at wingtip of swept wing?
3
What is the definition of Lift?
0
A question about the exact meaning of one British usage of the term "Angle of Incidence"
1
Does this web page really correctly depict the angle that is called "incidence" in the French language in the aviation context?
0
How does the aircraft keeps propelling forward when airflow and thrust are not aligned?
4
Explained intuitively, why does aspect ratio affect induced drag?
3
Why is sweep angle measured at the 25% chord?
1
Does the quarter-chord-angle rule still hold for wings with very long chords or large differences between leading- and trailing-edge sweep angles?