What is the flight trajectory of a commercial airplane in regards to altitude v/s distance?

So, my friend and I got into an argument regarding the flight trajectory of a plane. He said that for half the journey the plane is ascending and for the rest, it is descending and hence making a parabolic curve. I argued that it ascends and then stays at the same altitude for the journey before descending to make a trapezoidal curve. After some contemplation, I think that both of us are right just that the baseline reference is different where he took it as a straight line between the two places without the curvature of the earth and hence it would make it parabolic while I took the trapezoidal curve by accounting the curvature of the earth.

We can also say it is from a different of view with him being in space while I am running on the ground to measure the altitude.

So, can someone clarify and tell who is right and whether what I think is correct or not?

It would be helpful if someone can actually plot the two graphs. Thank you.

Both of you are somewhat right - in the way you mention.

Normally, flight profiles (i.e. the altitude flown over the distance covered) are depicted assuming (yes I know this might be controversial... oh dear ...) a flat earth. Constant altitude will then be represented by a straight horizontal line, so it is easy to see when the aircraft is in level flight and when it actually is climbing or descending: 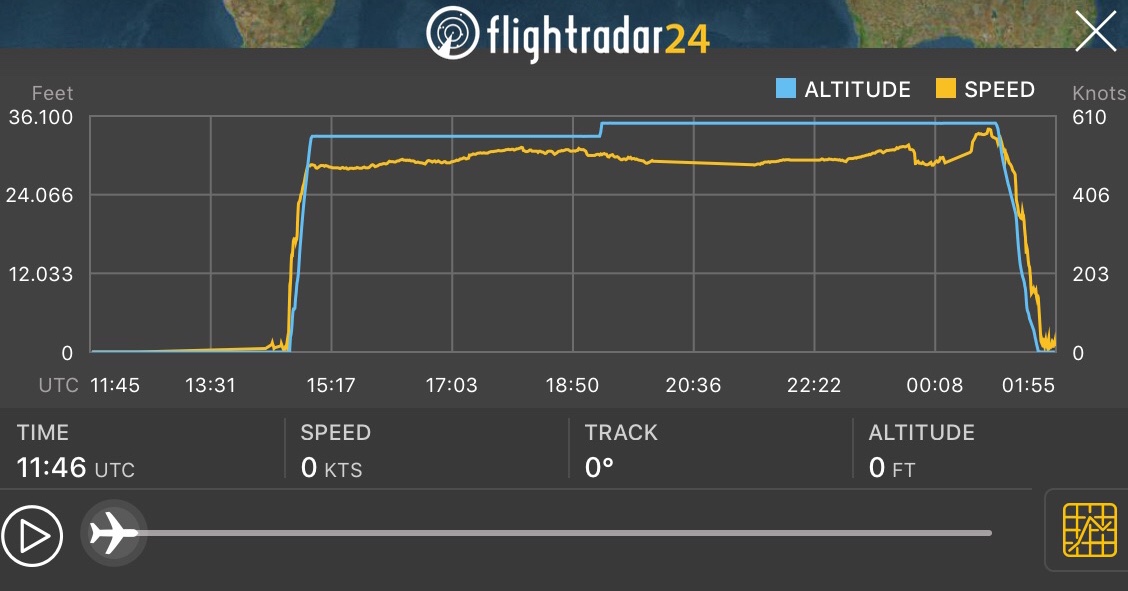 Note, by the way, that some short flights will have virtually no level cruise phase: 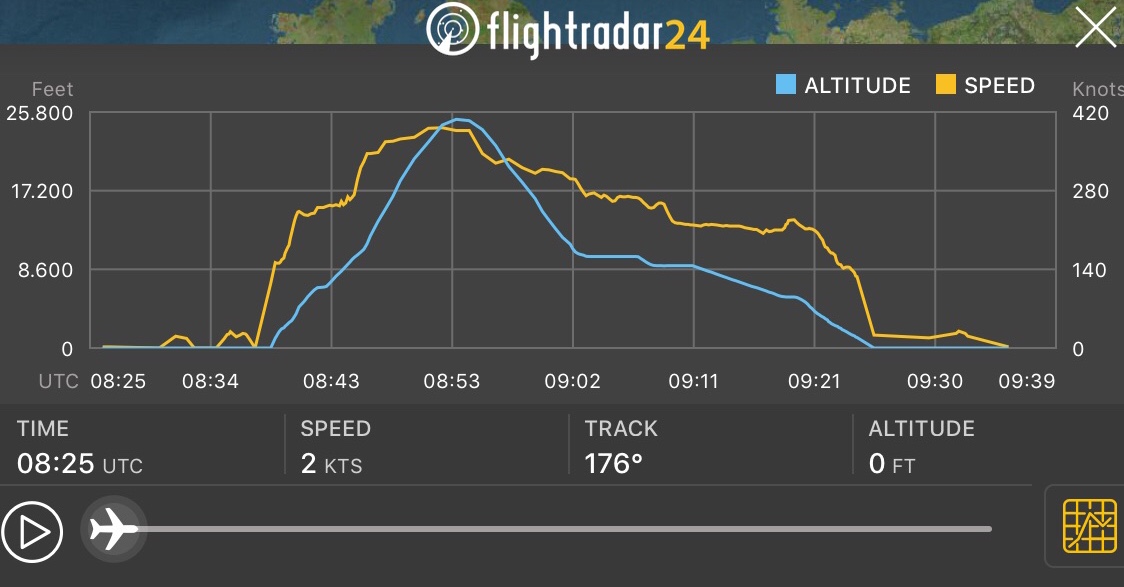 Also, a flight with optimum efficiency (minimum fuel used to cover a given distance) will look roughly parabolic in this profile view. Real life flights aren’t operated that way though, mainly due to constraints on airspace use. Airspace constraints will also be the reason the descent phase in the second picture looks so stepped.

You could, as you say, instead of the profile view show a 2-dimensional view with the curvature of the earth shown and the flight path plotted above it. That would then look curved for most of the flight. I don’t see much use in this representation for normal aircraft, though, unless we start to cover orbital operations...

Your friend is not correct and you are somewhat correct. For now I will consider long-haul flights as the effect is more visible. As the aircraft takes off it climbs towards it cruising altitude, say 33,000ft. Then during the cruise the airplane uses fuel meaning that the aircraft is effectively losing weight. Since during a steady cruise, lift = weight the aircraft will have an excess lift if nothing but the weight changes. This will make the aircraft climb to higher altitudes were the air is thinner and thus more lift is required.

Thus on some long-haul flights you can see that the flight ends at 38,000ft. Then the pilot initiates the decent for landing. Depending on ATC the aircraft is allowed to gradually climb during cruise to higher altitudes. If that is not allowed the aircraft will climb once every hour or so to a higher flight level.

Each aircraft has an optimal service ceiling (or altitude so to speak), depending on type and usage (military vs passenger vs small piston plane). As for passenger planes, airlines plan their routes the most optimal way: lateral and horizontally as well. It's a combination of aircraft weight, upper winds, shortest way, time vs distance etc. When you leave the the lateral options away and focus on the vertical options airline pilots mostly want to fly the optimal altitude to save fuel or time (or a combination of those two). The optimal altitude increases for the duration of the flight: the lighter the plane, the higher is its optimal altitude - except if for some special wind situations. Therefore a typical passenger plane climbs to a flight level (i.e. 35000ft) and when the flight guidance computer shows a higher optimal altitude, the pilots ask for clearance and eventually can climb to the next level (i.e. 37000ft). Roughly 30min before the landing the descend is initiated (can vary obviously) and can be a step descend (level to level) or a continious descend (the most economical way to descend).

What is the flight trajectory of a commercial airplane ...

A flight from say, Aukland to Doha would follow a path through three-dimensional space that is approximately circular. The great-circle distance along the track is 14,535 kilometres, the vertical variation above the roughly spherical surface track is about 10 km - less than 0.07% - we can ignore that. 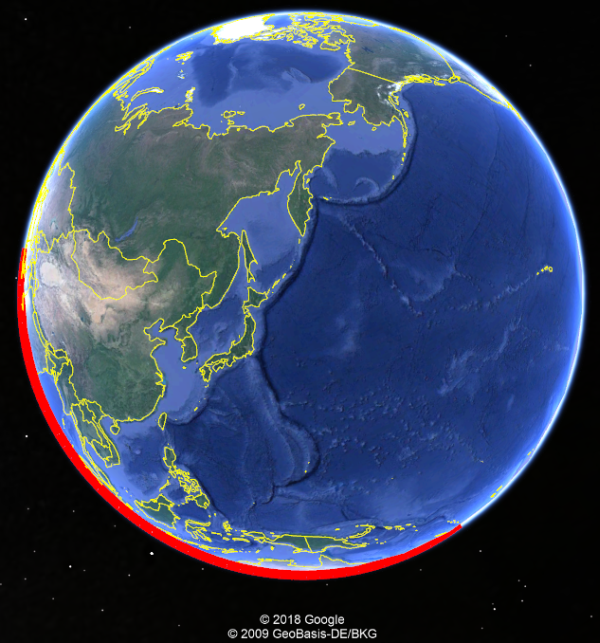 Google Earth showing shortest route from Aukland to Doha in red. The thickness of the red line is about 22 times the cruising altitude of an airliner. The difference between ground level and 35000 feet is maybe half a pixel.

Any graphs of long-distance flights that don't look circular are heavily distorted statistical deceptions designed to show only the insignificant† tiny variations from a perfectly smooth curve.

...in regards to altitude v/s distance?

† From a geometric perspective. You pilots keep watching that altimeter!

Not the answer you're looking for? Browse other questions tagged general-aviation flight-path aircraft-physics or ask your own question.

18
Would an airliner climb higher late in the flight because of the consumed fuel (lighter airplane) to save more fuel?
3
How can my CD0 estimation be improved?

5
How can I calculate distance based on altitude and glideslope angle?
11
What does ATC do when a VFR flight in the mode C veil has a malfunctioning altitude encoder or transponder?
8
In the traffic pattern, what is the appropriate distance from the runway for the downwind leg?
6
What trajectory do I fly if bearing angle is constant?
0
How to find the flight paths of an airport?
2
Is it possible to make an analogy between a lever and an airplane wing in terms of force applied over distance?
1
What is the relation between altitude and vertical speed?
0
How to estimate the altitude of an aircraft at a given distance from a runway?
7
Was this the intended flight path?