I had the opportunity to go to one of the Smithsonian Air and Space museums today and they had a Kaman K-225 on display. For those who don't know, the K-225 is a dual side-by-side helicopter design with an open cockpit: 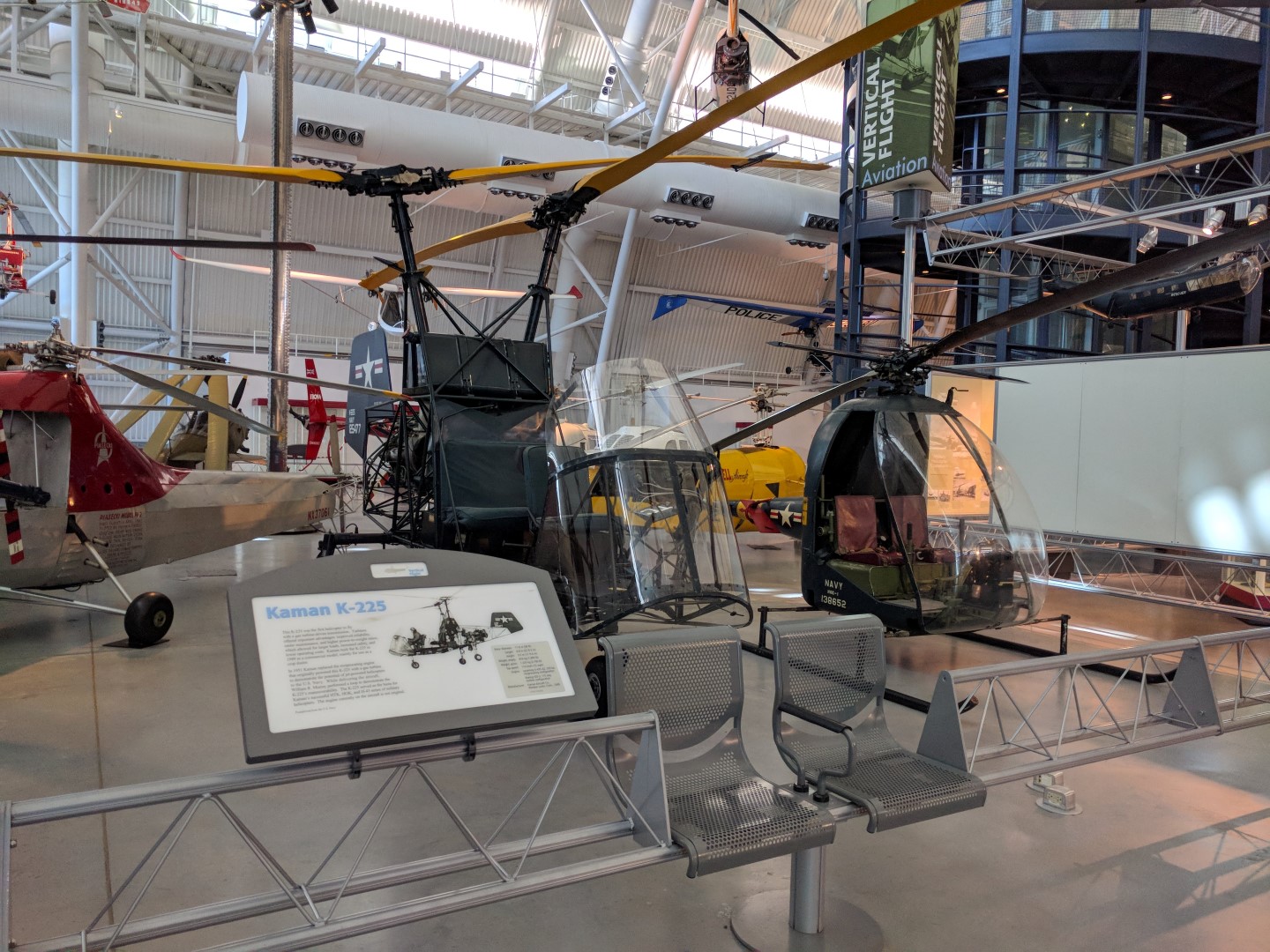 The blades look to be very basic wooden design without any kind of variable pitch on the rotor head. What I found very odd were the "planes" on the rotors: 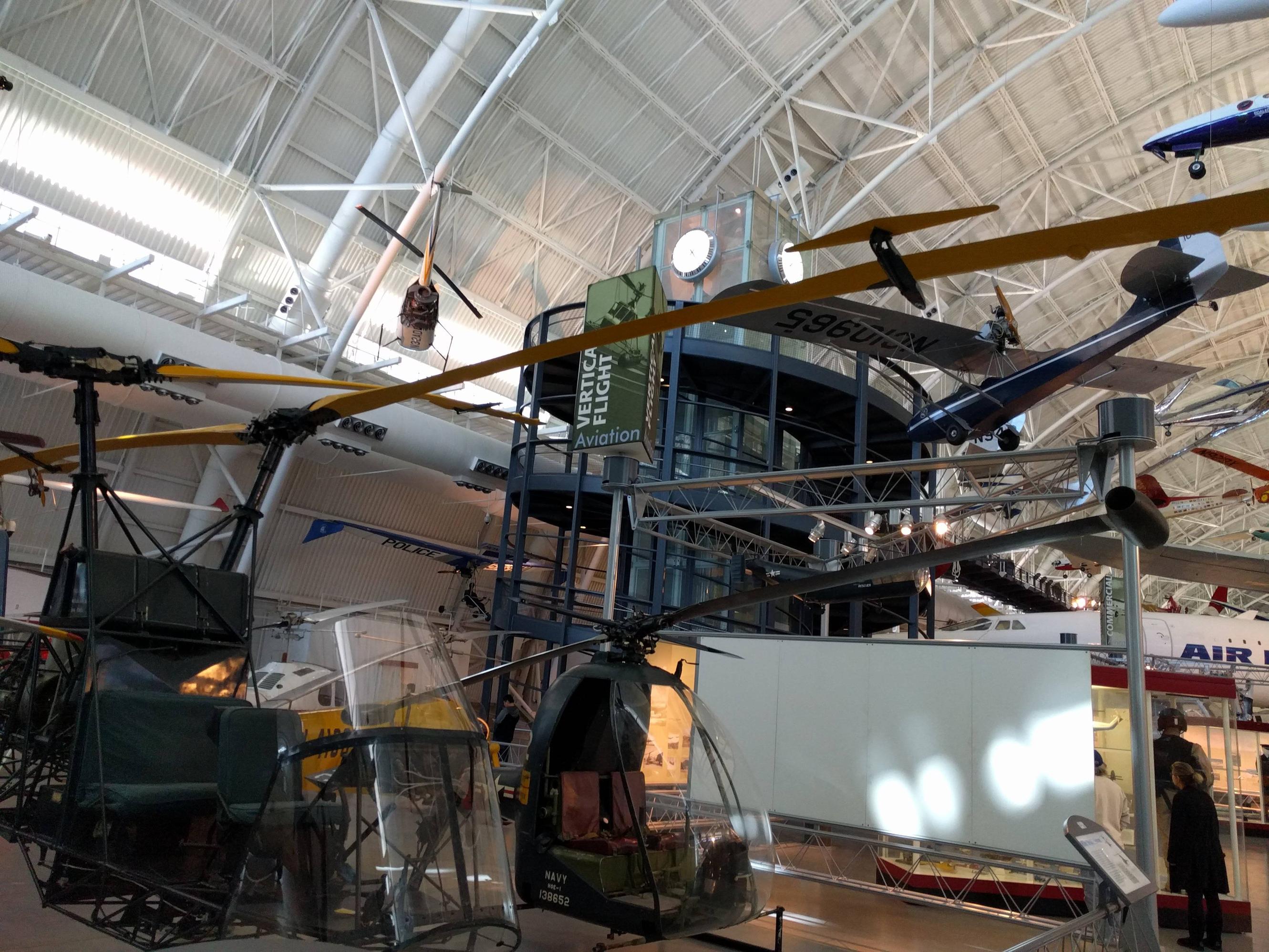 Each rotor seems to have one of these "planes" on it located about 2/3rds of the way from the root. Here is a close look: 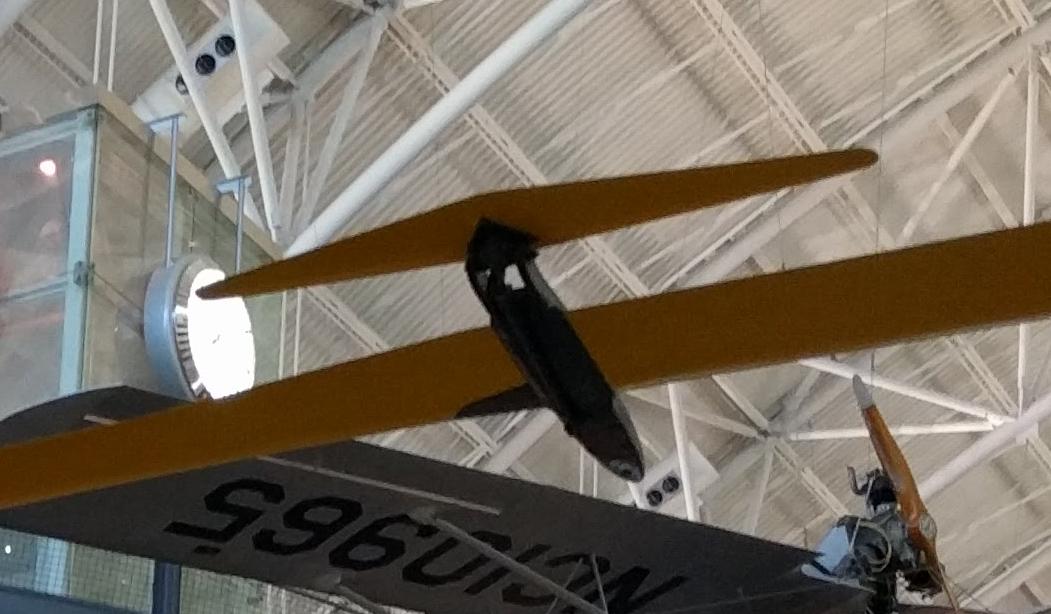 I wish I could have gotten a better picture but it looks like there is a rod going from the main blade to the smaller "wing" on the device. The rotors seem to be solid, so I'm wondering...

What are the purpose of these "planes" and how do they work (I'm assuming to change the AoA of the blade)?

These are a form of servo flap, commonly found on Kaman designs, but also on at least one early helicopter (namely, a coaxial rotor aircraft built by d'Ascanio (shown below): 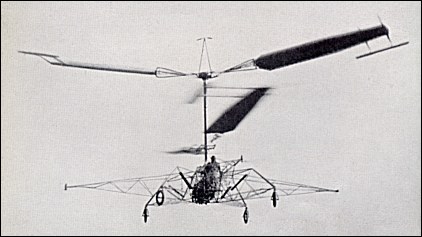 As opposed to controlling blade pitch from the blade root using pitch links (which are, essentially, pushrods), as in a typical rotor head, the servo flaps allow for pitch to be controlled by a control surface on the blade (similar to how controls work on a fixed-wing aircraft). The yellow "wing" is the flap, and the black item, I'd imagine, contains a hinge and actuator rod to pitch the flap up and down, generating a force at a small moment arm behind the blade, which then alter's the blade's pitch as desired. Instead of using an actuator to twist the blade, you're using aerodynamics to do a lot of the work for you, similar to how a fixed-wing aircraft works (except, instead of changing the rotor's effective angle of attack, you're twisting it instead).

Hence, if you look closely at the first picture you posted, you'll noticed that there is no swashplate, no pitch links, and really nothing reaching up the rotor mast from the helicopter except for a structural brace. This system does away with pitch links and their associated actuator systems and can decrease total system weight. In addition, as the flaps are significantly more streamlined than a typical pitch link, there is a possibility for drag savings as well. Compare the following two rotors heads -- the first is a semi-rigid 2-bladed rotor from a Bell 230, and the latter is a typical Kaman rotor head. The Kaman head is a picture of simplicity when you realize the only bits sticking out in the wind, beside the blade grips, are droop stops. 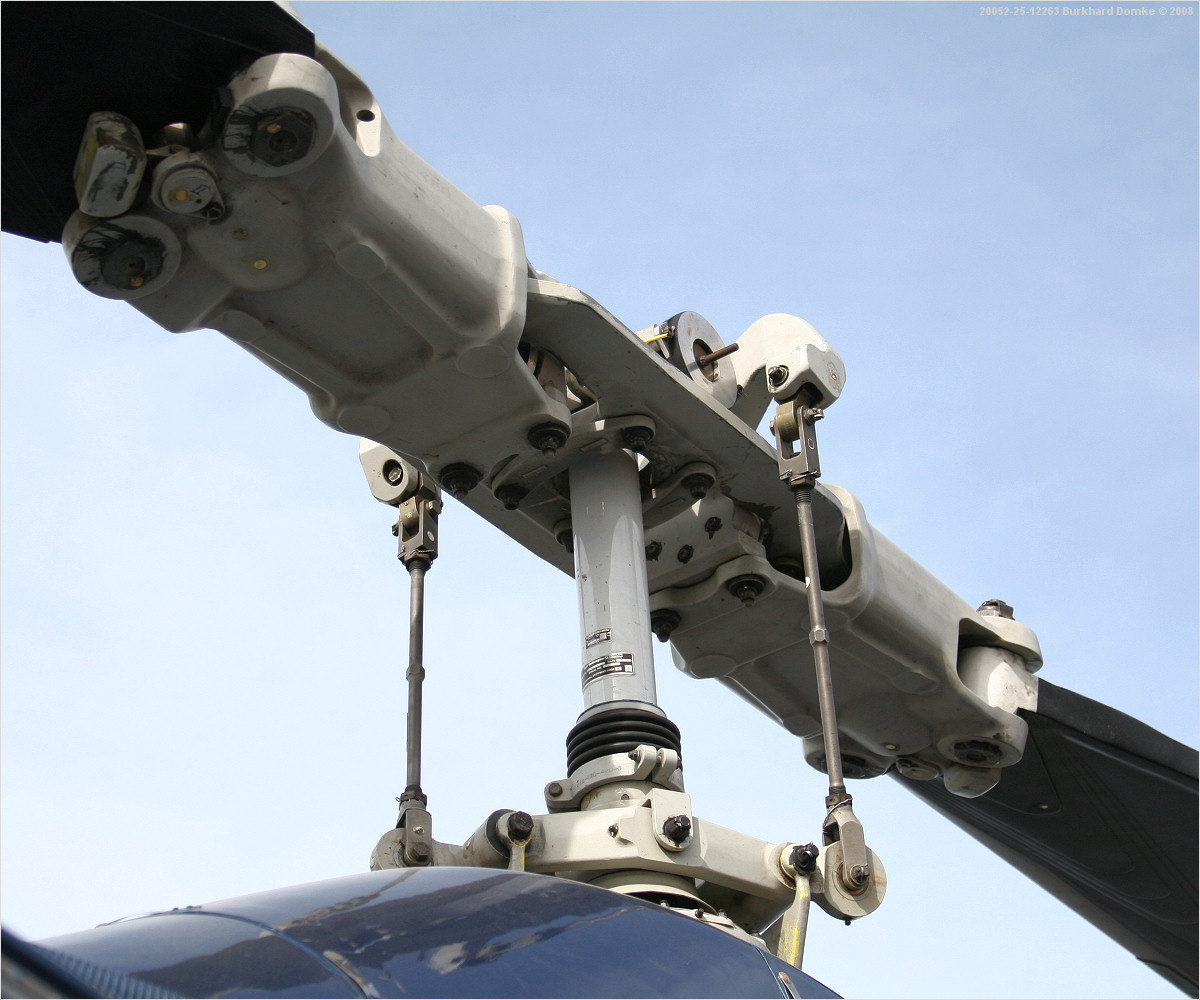 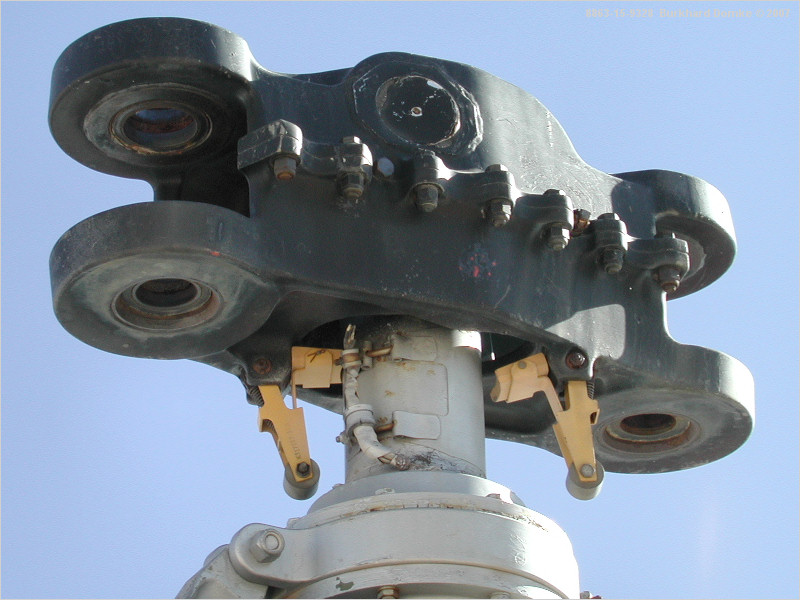 However, there's no free lunch. The price you pay for all this is that, instead of an actuator somewhere relatively "easy" (on the body of the helicopter), you have to put an actuator (albeit a much smaller one than would be required to drive traditional pitch links) out on the rotor blade and feed both control and power out to it. Control and power isn't too bad -- it's already done for anti-icing gear to some extent -- but the actuator can be tricky, particularly, I would think, in terms of tuning blade dynamics. Kaman (who built the K-225 and the highly successful KMAX, which also utilizes servo flaps) found a way to do this that works great, but it hasn't really made a splash in any other manufacturer's helicopters (to my knowledge). Rumor has it that Sikorsky and Northrop put together an entry for DARPA's Unmanned Combat Armed Rotorcraft program that had servo flaps on it, but that program got cut in 2004...so who knows? In the interim, swashplates have been the control method of choice for upwards of 80 years and work well for those who don't have experience with flaps.

The Kaman patent to which I link shows diagrams and describes the swashplate control and shows the hollow rotor shaft and so on - the patent shows only a single rotor helicopter but the dual intermeshing design uses the same hollow shaft etc. The control linkage mechanism which controls the swash plate or plates is called the azimuth mechanism.

The Kaman design is extremely robust and low maintenance and the latest Kaman K-MAX twin inter meshing design is popular for logging and fire fighting among other applications. The dual rotor design has outstanding fuel efficiency, outstanding payload capacity and makes less noise as well.

8
How does the Eurocopter Blue Edge and Blue Pulse rotor blade design work?
18
In helicopters, why not have electric motors controlling blade pitch?
2
How to calculate optimal prop diameter, pitch, torque and power coefficient given required thrust?
1
How does wind speed affect helicopter rotor speed?
2
How much lift must a helicopter rotor produce?
5
How does a Delta-3 hinge on a helicopter tail rotor work?
0
Are there any helicopters with tail rotors where slip-skid ball may be centered even when fuselage is streamlined to the airflow in cruising flight?
3
How does a bearingless rotor work on a helicopter?
3
Does dihedral improve roll stability in gusty conditions?