Why are there no "sleeper" planes?

On a recent long-haul flight I sat by the windows and was dreaming away staring into infinity out of the window. Then a thought came up, in Asia sleeping busses are very common. This made me think, why are there no dedicated sleeper planes? Especially for the long-haul 10 to 13 hours this would be ideal.

There certainly are; it's called "Business Class" and you'll find such areas with seats that recline into what are essentially beds on most long-haul aircraft. However, you simply can't fit as many people on board when they use up so much room, so airlines have to charge much more for these to make it economically viable. It's often twice the price of a normal ticket or even more.

They just don't really fly them any more.

All things considered history has a big impact on this. 13 hours is by comparison fairly short when it comes to long distance flying, historically speaking. Early aircraft that flew much slower than today's jets were built more like trains than the modern planes we have now. They had dining areas, berths, saloons, and powder rooms.

The Hindenburg had cabins for pretty much everyone aboard: 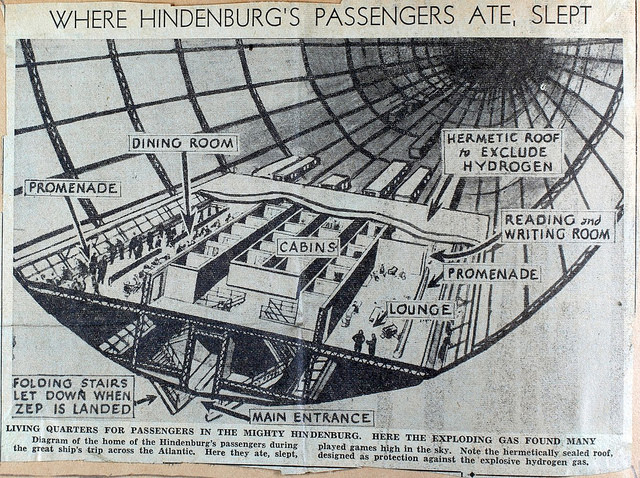 The Boeing Clipper had sizable sleeping berths that could accommodate many of the people aboard. 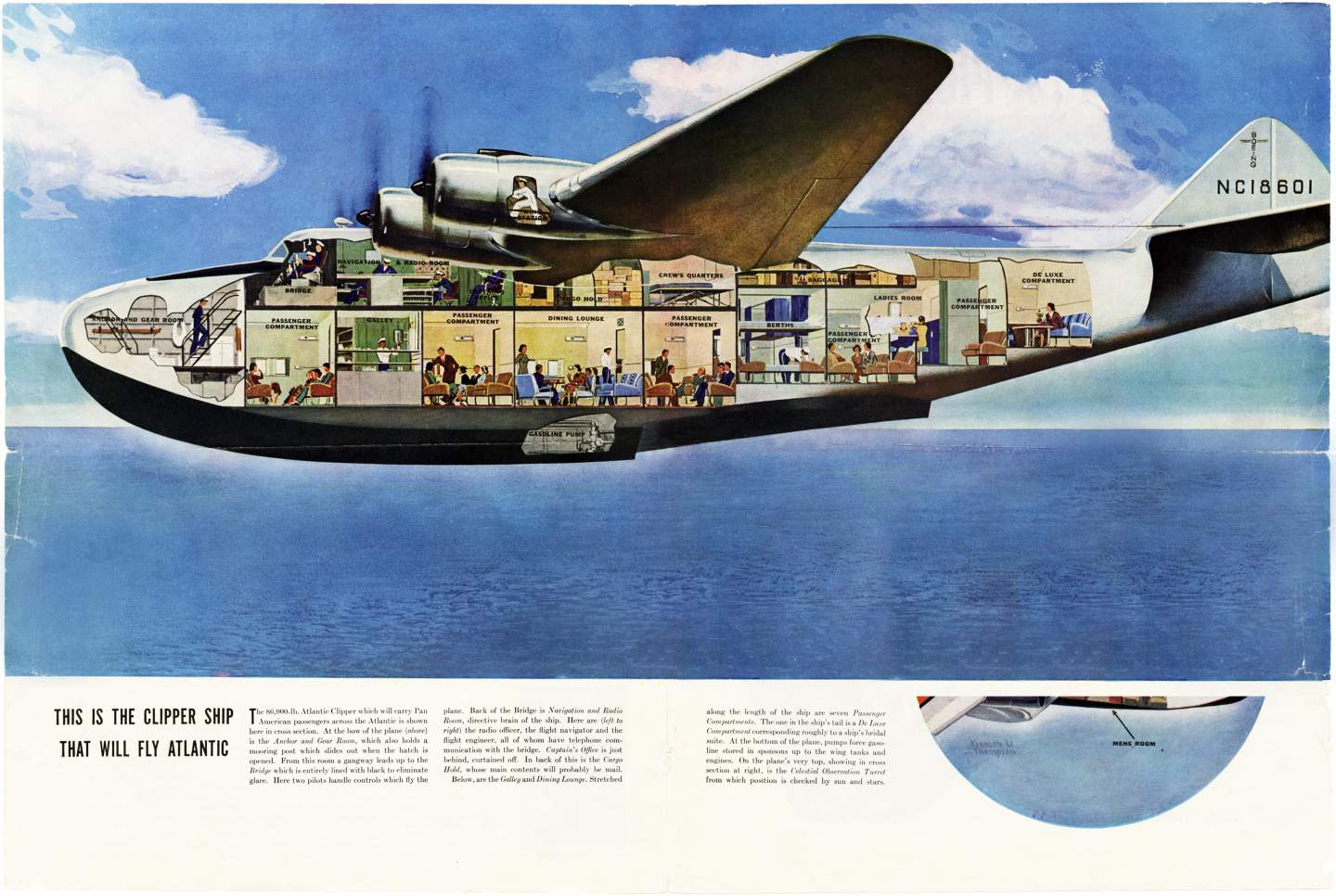 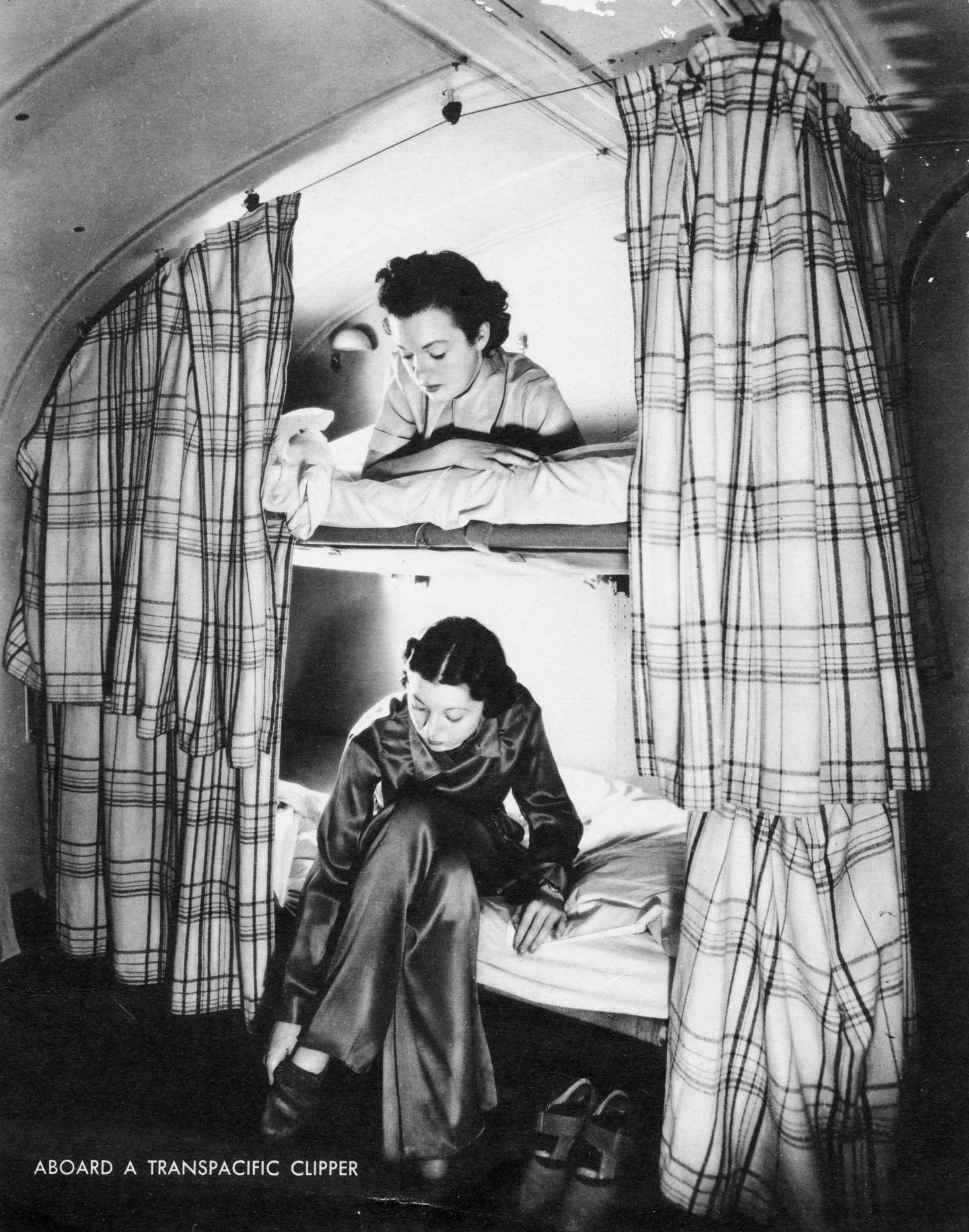 One of the big modern roadblocks on berths is the seatbelt regulations that accompany many modern regulating authorities. Classic berths would more than likely not pass modern safety regulations and certification tests.

I have flown in sleeper class with British Airways flying overnight from Toronto to LHR. 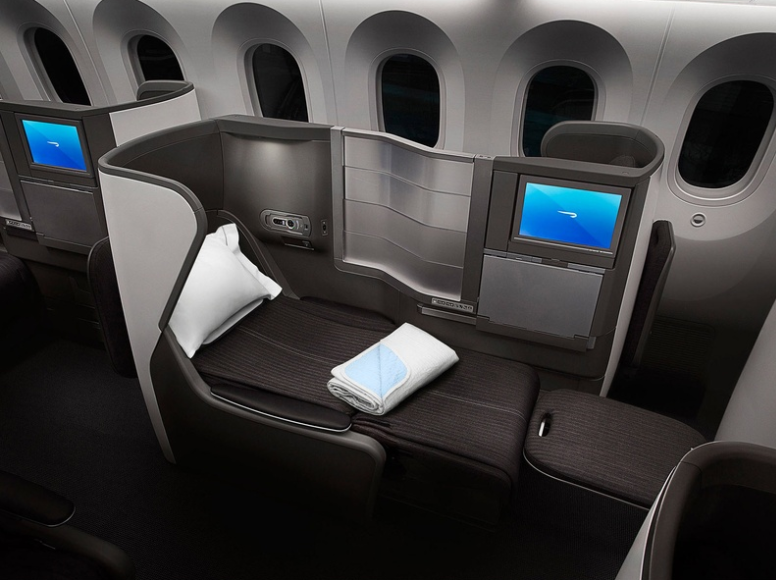 It was an expensive luxury which started out great, but when fully reclined the bed is not exactly flat and, if you sleep on your side, there are definite pressure points on the hips and knees. That made it rather uncomfortable after a few hours. Rather than arriving refreshed and awake like I had imagined, I arrived sore, even more tired, and just a bit cranky about the waste of $$$.

The morning "aroma" in that cabin was also a bit ripe. Apparently nocturnal flatulence was not something the designers considered.

Personally, I would not fork over the extra for that again. I was much more comfortable on the return journey in an extra-wide business-class seat.

At the very least you should check to see what sleeping equipment they install. Based on the images on-line, some are apparently a lot better than others.

Not only is it expensive, as in less seats, the relatively high speed of current airliners mean that most flights aren't that long.

It wasn't always that way. In the 1930's, the average speed of an airliner was 130-180mph. Due to the slow speed and lengthy flight times, sleeping berths were installed, especially in the case of the very long range ocean transports like the Shorts Empire, Boeing 314, and Martin M130 who could remain in the air for over 24 hours. At that time, airlines still derived most of their profit from mail delivery, and there weren't that many people who would use air travel (considered dangerous and uncomfortable), so the sleeper berths were a way to encourage people to use air travel, while there weren't enough passengers to fill conventional seats on those long flights.

One land transport that had a long range was the Douglas DC2, originally developed to compete with the Boeing 247, when Boeing would only sell the 247 to United Air Lines (which it owned). American Airlines requested that Douglas develop a version of this that had sleeping berths for transcontinental flights. Douglas widened the fuselage, lengthened the wings, and called the result the Douglas Sleeper Transport.

We know this legendary aircraft, the first that could turn a profit on passenger traffic alone, by it's later name... the DC3.

Singapore Airlines have a few "Suites class" cabins on their A380 planes with actual full-sized beds. It looks like this: 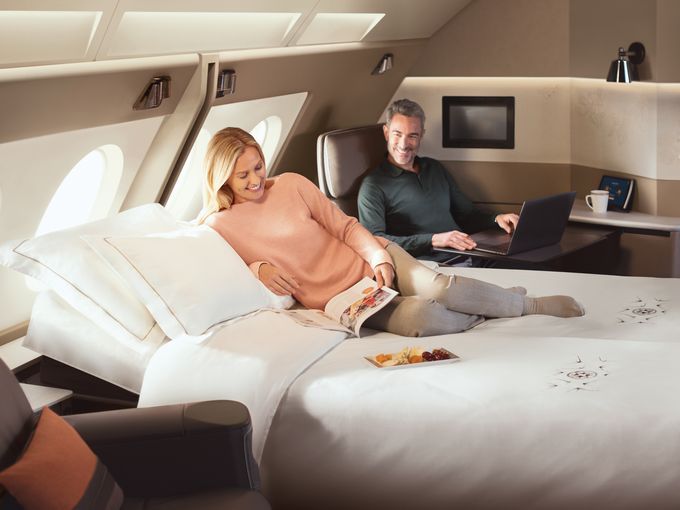 A report from one lucky traveler who racked up enough miles to try it:

In the Suites, you don’t just lie on a seat that has gone flat. Instead, you step aside while the Singapore Airlines flight attendants transform your Suite into a bedroom, with a plush mattress on top of a full-sized bed. When the adjacent suite is empty, the dividing partition can be brought down to create a double bed.

Although it's not mentioned in this report, in most "normal" businesss-class "flat bed" style seats you still must have a seatbelt fastened over the blanket while sleeping (presumably due to safety requirements), so it's not quite the same experience as on a sleeper train, but can come pretty close.

I'm surprised at the answers:

mostly all wrong. Here we go (I used to work doing software internal layouts a airlines)

Contrary to popular belief, It's not really a concern whatsoever about manipulating internal vehicular space. Airplanes displace a larger amount of internal volume than they require, and the residual space is mostly air, so so long as the bed weighed not more than the chair it replaced it could be done and zero MATERIAL cost to the airline.

But there are other costs: and much bigger concerns

Beds aren't done mostly because people underestimate the impact of turbulence. In fact, it's well known, you can double your probability of not dying in a plane by simply wearing the lap belt and staying sitting down.

I.E. turbulence kills as many humans in planes as air plane crashes do: And it's the head hitting the roof that does it. However staff are less lucky in that they get such beds for use on long haul. In fact they are lovely.

While this may seem facile, it's not: in a 3 bunk bed layout the proximity to neighbour beds (above, above and roof) would ultimately cause you to have a MUCH higher incidence of human/airplane collisions while at rest but under turbulence, which while such impacts would not always mean your head got smashed, there'd be more impacts for both these reasons: lap belts would be unusable, your head would be nearer obstructions, and a much smaller turbulence jolt would cause collisions.

Similarly landing would be highly problematic and there would be much greater incidents of hospitalisation and death at landing.

in both senses: an airline can't swap the air frames to different legs as easily, and a passenger can't eat lying down

you can't upsell business and first class sleeping pods so easily if economy has them, and airplanes usually lose money in economy and make money in business/first, so they never dis-incentivise upgrading.

speed on off MASSIVELY affects profit margins for airlines, every second they are on the floor they LOSE money every second they are in the air they MAKE money. They designed the A380 to be able to on/off at much higher speeds because of this concern. If you have beds it takes ages to get embarked/disembarked. 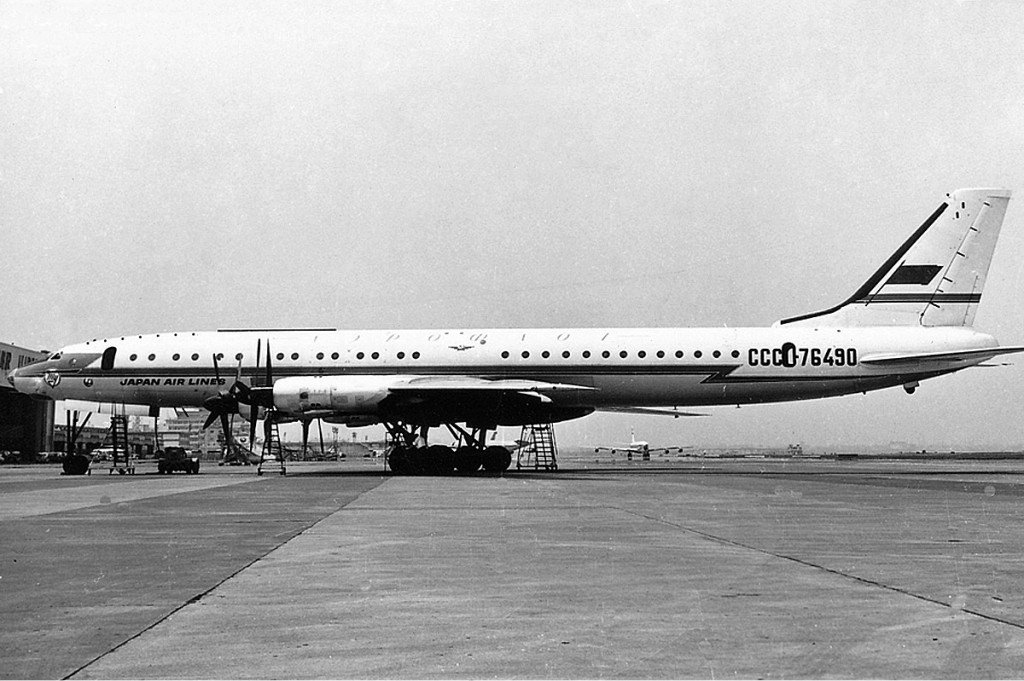 There were sleeping berths in the upper-class cabin of the Tu-114 aircraft in the 1960es. In 1970es these planes were modified -- the sleeping compartments, as well as other "luxurious" design elements were replaced by standardized seats. The modified version could transport 224 passengers (versus 170 in the original design with sleeping compartments). 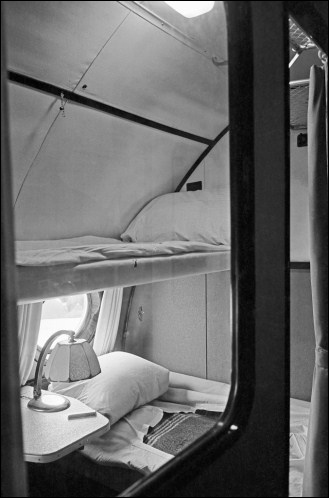 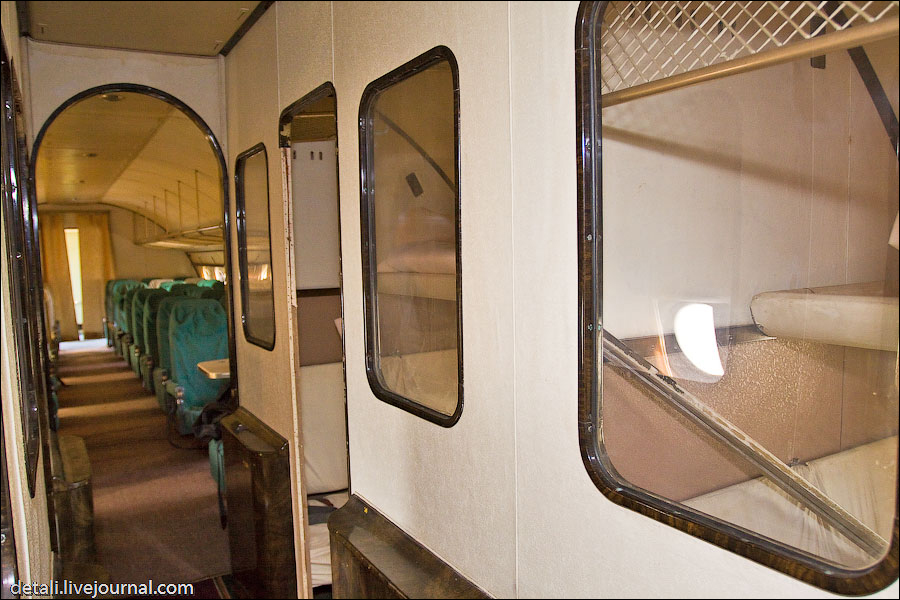 I flew on a sleeper once, about sixty years ago. I think it was a Douglas DC-6 from Miami to Buenos Aires. I don't remember much, except that the bunks were a little like the ones on sleeper trains.

When airlines switched from piston power to jets, flying times were cut in half.

As others have stated, there are sleeping berths, but only for those who can afford the premium.

I myself have taken sleeper trains several times; I like them because I can arrive at my destination city in the morning, and still have the whole day to do things.

I can sleep quite well on a plane, in coach, by using a foam collar -- the kind they give to people with neck injuries. Whether by train, bus, or plane; I can't stand when I have to arrive in the late afternoon or evening, because then the day is shot -- I can't do anything except go to my hotel and get ready to go to bed. (Unfortunately, where I live, most night flights are banned because of noise restrictions.)

The incredibly simple answer is that:

You have to be sitting upright in a chair, in a seat belt, for take off and landing.

It's that simple - an "all-bunk" configuration (like a sleeping-bus) is a non-starter.

42
Why do lavatories in modern planes still have ash trays?
7
Are there any civilian planes with seating arranged in a round area?
4
What is the size of toilet or septic tanks in various planes?
34
Why are planes using rivets & not welded construction?
7
Why do older planes not have a middle hand luggage compartment?
11
Are overhead bins airtight?
13
Are there any hybrid electric planes?
2
Are there all terrain landing gears for planes?