What causes the "growl" of some large turbofans at takeoff thrust?

There are some (all?) large turbofans which emit a distinct "growl" (some people call it a "buzzsaw" sound) at takeoff thrust. What causes it? I've seen it explained (as in this question) as the fan blade tips going trans sonic, but it doesn't account for the pitch, or so I believe. A main fan has something like 20 or 30 blades, and must be spinning at several thousand RPM at takeoff power (maybe on the order of 4,000); a blade tip would then be passing a given fixed point at around 80,000 (or more) per minute or 1,300 (or more) per second.

The musical middle C is only around 260 Hz, so any blade noise should sound like a high-pitched whine, not a low-pitched growl. You can often hear "beat" sounds due to two or more engines running at almost the same speed, but the buzzsaw growl is distinctly different. So what causes that sound at that pitch?

There is a wide range of harmonics generated by the fan, descending all the way into the lower sound spectrum. This article is about sound insulation of a turbofan shroud, and contains sound measurements of an actual turbofan in a ground installation at full TO power: 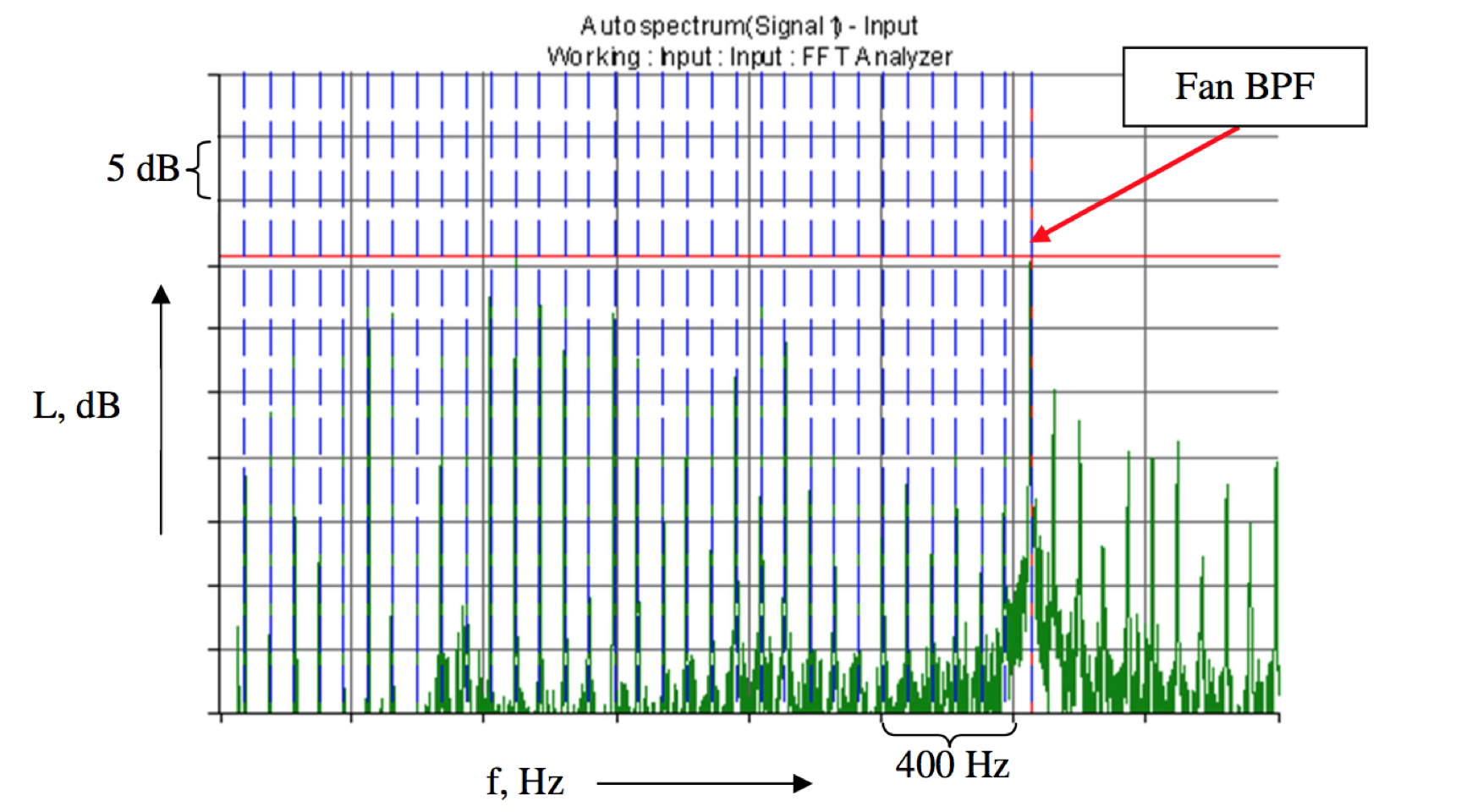 The article seems to be Google translated into English from Russian, but the observations made are very valid:

At power regimes with Mach number M>1 at the periphery of blade wheel there is a well- observed shock wave noise appeared on harmonics of rotor frequency that could be seen at fre- quency range between the first rotor frequency and fan BPF. Shock wave noise has a high sound power level due to the used lemniscate inlet duct without lining and waisting.

We presume that "waisting" is meant as in: application of a varying cross-sectional shape (waist). The blue lines in the plot are the harmonics of the rotor frequency. There are 16 of them in the first 1200 Hz, in a linear scale this implies that the distance between blue lines is 75 Hz.

Significant sound peaks can be found at intervals of 75 Hz, immediately starting at the first harmonic line of 75 Hz. Note that the fan Blade Passing Frequency is at around 2,500 Hz, but that the frequency spectrum below the fan BPF is quite densely populated. The dominant sound that is observed on ground from an aircraft turbofan is of course dependent upon the position, distance, inlet shape, acoustic insulation measures etc etc. It makes a lot of sense if most sound insulation efforts are invested in the loudest spectrum, and that the low buzz sounds are regarded as a low priority for suppression since they are not very disturbing.

"Buzzsaw noise", as commonly defined, is caused by the shock waves from the trans-sonic fan blade tips, as described in the answer by @Koyovis, as well as the linked answer.

Your question seems to focus on the low frequency component of the sound, and you correctly point out that fan blade passing frequency will be on the order of 1 kHz.

There is another source of noise generated by the engine that can often be heard in the cabin, and this is caused by the vibration of the fan rotor. Whenever the fan is not perfectly balanced (and it is never perfect), the unbalance will cause a vibration at the rotation frequency of the fan. This is almost certainly the 75 Hz fundamental tone in the article linked by @Koyovis. The rotor speed varies with the size of the engine, 45 Hz for a big one like on a 777, up to 100 - 200 Hz for small regional jets.

This vibration energy is transmitted as structural vibration through the engine structure, through the pylon and the wing, and then causes the fuselage itself to vibrate at that frequency. This causes the interior of the cabin to become a giagantic loudspeaker, at the rotor frequency.

Engine and aircraft manufacturers attempt to control this noise by keeping the engines well balanced, and trying to minimize the amount of power transmitted through the wing.

Not the answer you're looking for? Browse other questions tagged jet-engine turbofan noise or ask your own question.

12
What is the buzzing noise generated by the engines in this 777 takeoff video?
8
Acoustic analysis from an aircraft engine?

12
What drives and/or allows the move to higher-bypass turbofans on jetliners?
6
What causes noise when a plane is on the ground?
12
What causes the distinct sounds of a jet engine?
7
Gear reduction on large turbofans
3
What factors contribute to the poor off design performance of turbofans?
29
Are large jet turbofans so easy to spin?
1
Why would sea level static thrust have a takeoff and a maximum continuous value?
7
What causes the horn-like noise during the start-up of some jet engines?
13
What causes pulses to appear in some contrails?