How do I choose the correct airfoil?

I am currently working on a personal single seat, piston aircraft that I would fly myself and I am currently in a bit of conundrum when it comes to my wing design. In this project, I assigned us in 2 basic groups. The guys that work on the chassis and the guy (me) that works on the aerodynamic surfaces. Namely wing, surface controls, tail and such. It is a standard pull configuration aircraft, tricycle landing gear. My problem here is that I am kind of undecided when it comes to my airfoil of choice, so I thought of giving the forum a go and see if anyone can illuminate or inspire me.

As of now, http://airfoiltools.com/airfoil/details?airfoil=naca643618-il has been my choice, but maybe I am starting to think that other options could be better so let me write here a few specifications that could come in handy regarding the aircraft.

The main body will be build of steel tubing covered either in Aluminium or fabric. This will be the final choice once we calculate how much lift we can actually produce.

The wings and other surfaces will be made out of carbon fiber. I will be the one mainly working on this, and they will be attached to long solid cuboids spanning from one tip of the first wing, through the body and all the way to the tip of the second wing. The shape and dimensions of these cuboids will be determined through a FEA after we have the correct wing profile (so we can play with the variables afterwards or maybe even find better solutions). The wings will either be attached with rivets to the cuboid or with standard well shaped bolts. TBD.

The aircraft is planned to be mostly used at not so great speeds. If we can achieve a takeoff at 16-20 m/s with flaps on it would be fantastic. I would not like the top speed to be anything great either. I mostly would use this in very good still weather to cruise around the fields.

I can afford having an airfoil that is a bit thick, but would like to manage the turbulence that would be created by boundary layer separation in high thickness and/or camber foils. Maybe I will modify a bit my final selection.

The wing will have flaps, in fact it will be a flap that extends at around 35% of the total span of the wing. It will be a modification of the slot and Fowler flap (a sort of optimized approach that mixes both) whose final geometry will of course be dependent on airfoil selection.

P.S : I use Fusion 360 for modeling, Autodesk CFD to calculate the total lift of the full 3D modeled wing/aircraft.

What you call cuboids is normally called a wing spar. It consists of spar caps for the tension and compression loads and a web between the caps to transmit shear. And yes, it runs all the way from one wingtip to the other.

The spar carries the bending moment which has its maximum at the center and is zero at the tips (unless you use winglets). The more distance there is between the two spar caps, the lighter the spar can be built, so a thick mid-wing airfoil helps. Your choice of the NACA 64₃618 is a good start. I would advise, however, to taper the wing to something like a NACA 63₃412 at the tip. Thinner airfoils have lower minimum drag and higher maximum lift coefficients which helps to avoid the tip stalling first.

Or you move to newer airfoils which have been optimised for longer laminar boundary layer runs. Since you plan to use carbon/epoxy for the wings, you might take advantage of the exceptionally smooth surface this makes possible. The NASA contribution is of course the NLF series, NLF standing for natural laminar flow. The NLF(1)-0416 or the NLF(1)-0215 would be possible candidates. Even better designs might be possible when you search for modern glider airfoils; however, the published ones generally are at least 30 years old. Glider airfoils are optimised for minimum Reynolds numbers of around 1 million; when used in a GA aircraft this might be a bit conservative but could fit well to your low speed requirements.

The ultimate step could be to design your own airfoil. Take my glider recommendation and use XFOIL to tweak it to what you really need.

One last word on your choice of flaps:

When the inboard span uses powerful slotted flaps, their increased circulation will change airflow at the outer wing in such a way that the outer wing will stall before the inner wing had a chance to demonstrate it's lift potential. Either stay with plain flaps (for which the HQ-17 was designed - make sure you calculate it with a positive flap deflection at slow and negative at fast flight speed!) or add slats to the outer wing. In order to keep complexity manageable, I would recommend to use plain flaps and flaperons over the full span.

A few of the obvious factors to consider in choosing an airfoil include:

From the intended maximum weight and intended speed range, you can get some idea of the wing loading you want. Given your intended (relatively low) minimum takeoff speed, you need fairly low wing loading.

With some idea of the wing area, you can start to think about how to achieve that: greater wing span vs. greater chord. As a simple guideline, something that has a really "clean", low-drag design will tend to benefit from a high-aspect ratio planform. Conversely, a higher-drag design will work better with a lower aspect ratio of wing. To give a couple of extreme examples, competition sail planes often have an aspect ratio around 50:1. A piper cub had an aspect ratio of 7:1, and hang gliders are often around 1:1.

With the chord and operating speed chosen, we can compute the range of Reynolds numbers we care about.

With that, we can also start to think about pilot skill level. For example, let's consider the NACA airfoil you suggested. With a minimum of 20 m/s and a 0.1 meter chord, we'd get a Reynolds number around 50K. Looking at the Cl vs. alpha curve for this airfoil at 50K: 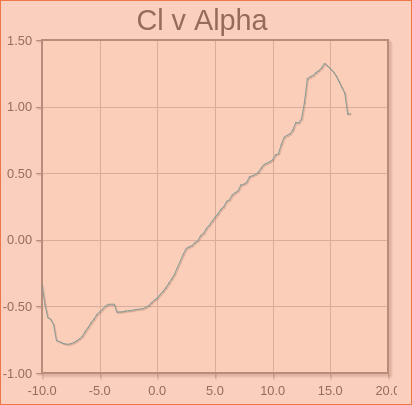 For the moment, the part we care most about is the right side of the curve. Note how it curves upward, then has a very sharp peak and drops again very quickly.

That's telling us that (at this Reynolds number) the airfoil has a really nasty stall--as we move to higher angles of attack, it produces more lift--then with just slightly greater angle of attack, it stalls and the lift drops like a rock. In this range of Reynolds numbers, this could be pretty tricky to fly, even for quite an experienced pilot.

By contrast, if you can be reasonably certain your Reynolds number will be at least a million, the picture changes quite a bit: 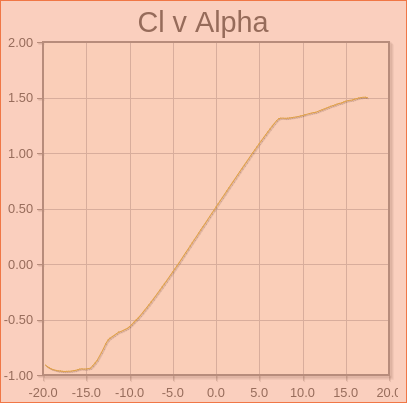 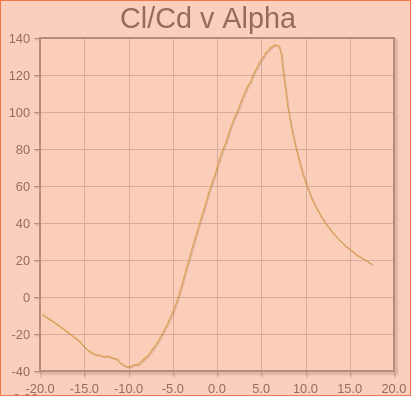 Based on these, we can guess that this airfoil was probably really designed for higher Reynolds numbers. At 50K it's basically evil. At 1M it's more manageable, but still kind of a handful--especially since, with such high drag, when you stall your air speed (and with it the Reynolds number) will start to drop very quickly, so unless you react to recover from the stall quickly, you're going to drop into the range where you're going to lose lift as well.

Let's give a little thought to that final factor: fabrication skill. Here what we're most interested in is the accuracy with which you're likely to build the airfoil. Some airfoils are really picky about following their profile precisely to get good results. For example, quite a few of Selig's designs have a subtle "bubble ramp" along the upper surface. If you get this even a little wrong, you can end up with quite a bit higher drag than intended.

Other airfoils have quite a bit higher tolerance, so minor deviations from the intended profile won't affect their performance nearly as much. If you aren't very experienced, one of these may be a better choice.

I am of the idea that @Peter Kämpf posted, and would have liked to have a modification of my own to the http://airfoiltools.com/airfoil/details?airfoil=nlf0215f-il NASA NFL-(1)-0215 airfoil that he recommended. I saw it to be a good idea to Put a larger airfoil section on the base and taper it to a smaller verion of itself (and in fact the only problem i have with this is the tail at the end of the airfoil could get too small if i tended to go for a delta win formation, so that is out of question. A delta wing would be too hard to material-engineer the end of the wing. ) so the best i thought of was it to taper it not so much, and increase the wing area at the base a bit. Would have been interesting as it would have made for a stronger structure to hold my weight, id like to keep stuff light.

The problem i have with the airfoild with an xfoil calculation is that, i pretty much made a Aoa-Cl-Cd table for angles, but xofil predicted the sepparation zone being a bit lowere in the airfoil at higher Aoa's * but not much * , 10 DEGREES.

The Simulation is made in CFD at a decent mesh size at quite a few iterations. 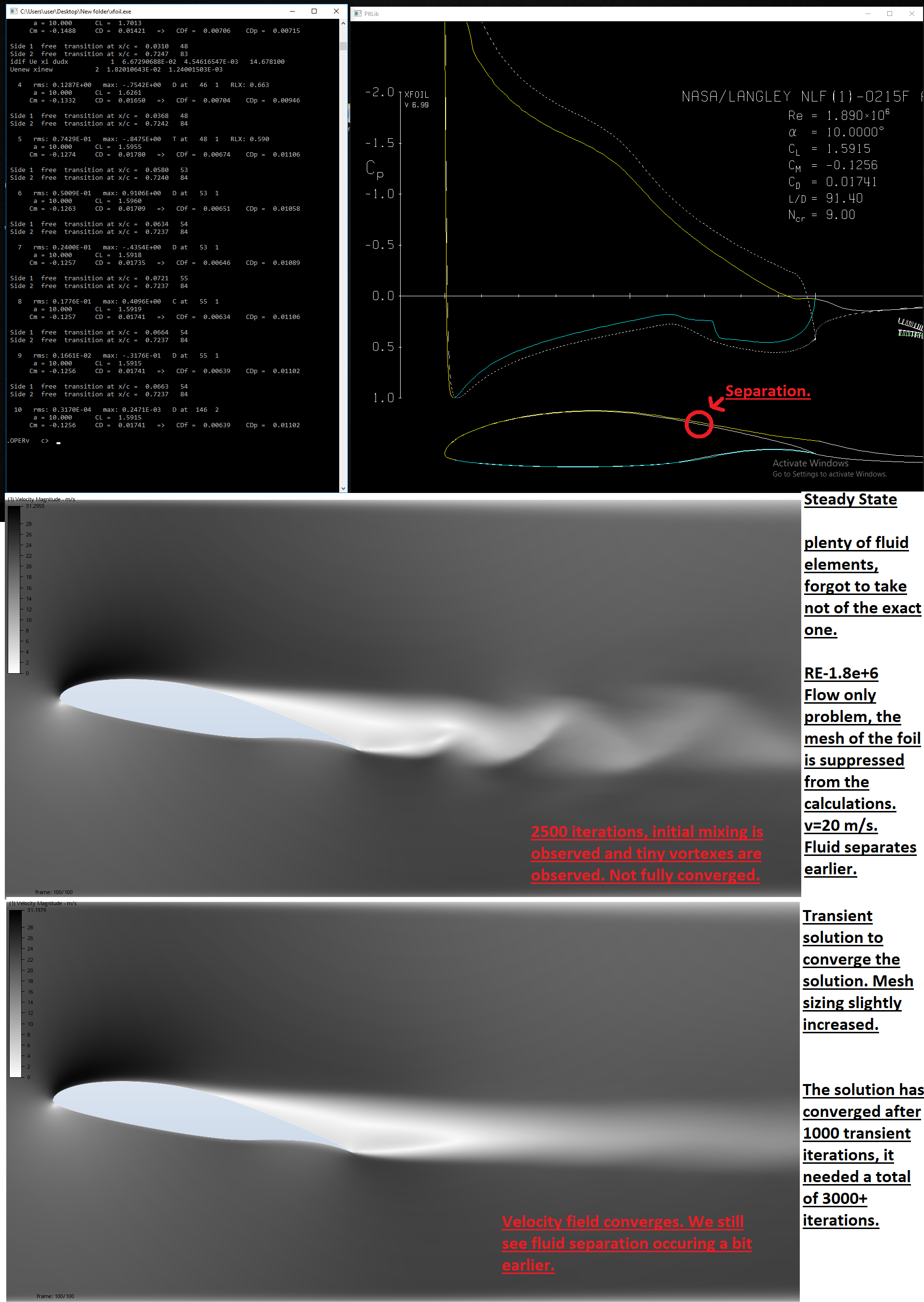 Is the xfoil table, for engineering purposes, accurate to a degree?

Also i thought of making a small modification to the airfoil, and add a bitsy more camber at the 60-65% of the camber line length. And see if i can stall the sepparation with 3 decently sized vortex generators. Also ill do some flaps simulations aswell.

19
Why and when to use flaps?
12
Why isn't there a single best airfoil for subsonic flight?
11
What is the point of making one control surface play the part of multiple control surfaces?
7
How often are slats used on airliners?

13
What is the method to calculate a finite wing's lift from its sectional airfoil shape?
4
How can coefficient of lift on the ground with flaps in the takeoff position be calculated using airfoil data?
3
How to calculate the lift coefficient of a multi element airfoil?
1
How to design the blade twist angle in propeller design?
0
Winglet design and airfoil selection
4
What is the purpose of thinner airfoils used near wing tips?
3
Does a rotating control surface change the wing area?
1
How do I choose the correct params?