How hazardous is it if an engine cowl falls off?

There was recently an incident where the engine cowl of the starboard engine of a United Airline's Boeing 777 fell off during flight: 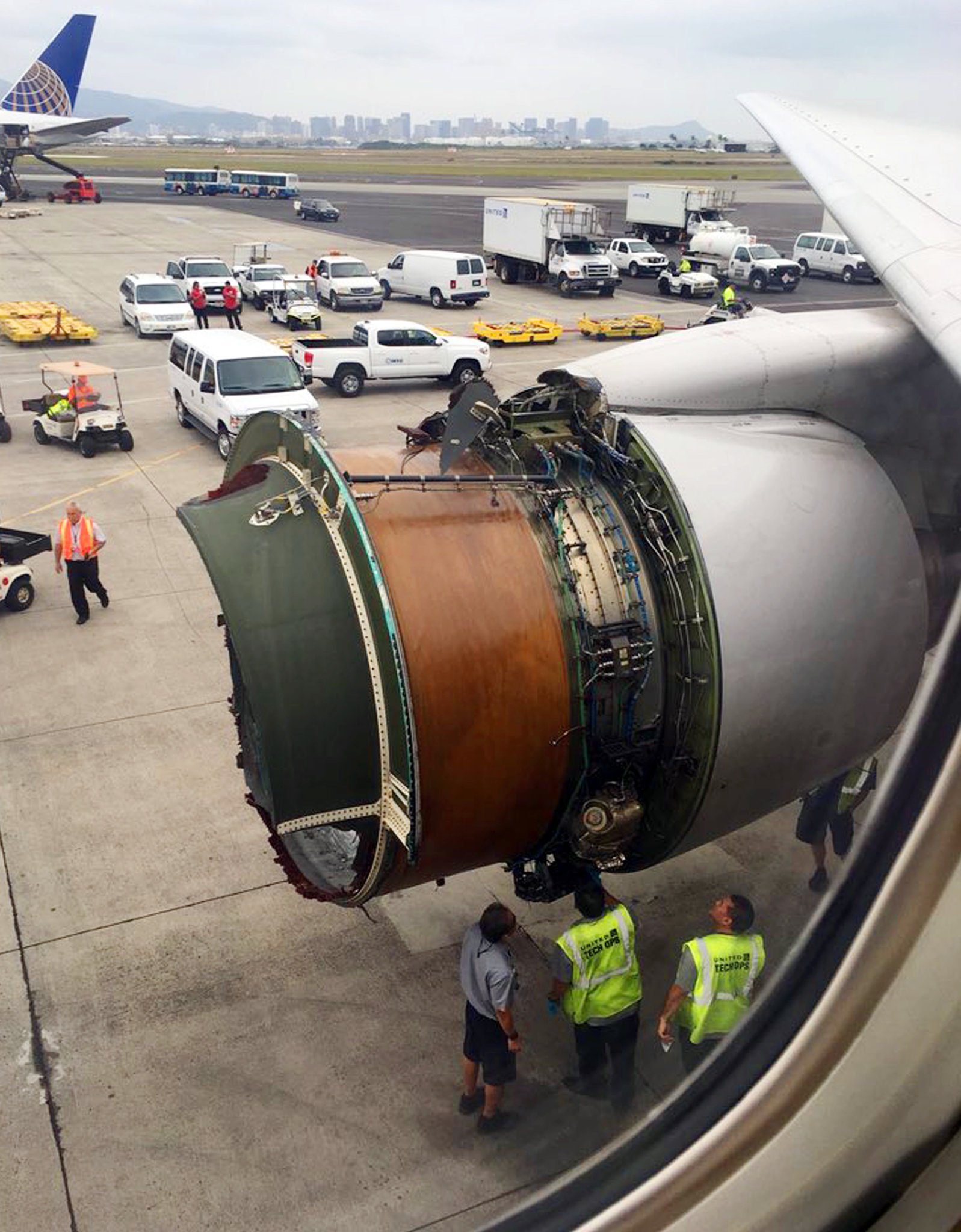 All available articles seem to suggest it was 'sort' of an emergency and they did in fact do an emergency landing...

A United Airlines flight from San Francisco to Honolulu made an emergency landing Tuesday after an engine cover reportedly flew off mid-flight.

... with people even asked to brace for impact:

“They let us know that we had to brace for impact in case there was a rough landing,” she said.

It seems logical that the cowl coming off could be a sign of loss in structural integrity around the engine (also of the engine itself?).

Another issue could be ingestion of debris (especially near the engine inlet).

How hazardous is such a case of the engine cowl falling off?

Note: I do understand that a twin engine aircraft can continue flying after a single engine loss however due to the reduced performance an emergency landing would make sense.

I work in aero engine safety but not for the company that manufactured the engine in the event you mention.

Parts falling off engines is Not Good. We worry about them hitting people below the aircraft. And as Koyovis mentions, losing the nacelle or portions thereof (looks like in this case it was the intake and fan cowling) can change the aeroelastic properties, thus inducing vibration, which is not comfortable for the passengers or crew (reducing their ability to do their jobs) and adds additional loads to other engine parts.

It is not true as mins states that the cause or consequences are unknown. The regulatory authorities require manufacturers to submit a detailed (thousands of pages long) Failure mode, effects, and criticality analysis (FMECA) that covers every part of the engine, what could go wrong, what the consequences could be, and what we are doing to make sure it won't go wrong or that the effects are minimized if they do. While I don't work on that engine, I am confident that structural failure and release of the intake is in the FMECA.

In my professional judgement, in the scale of failures affecting engines defined by the FAA (catastrophic, hazardous, major, minor), this failure would be major, due to a large part falling off the aircraft able to hit a person below, the reduction in safety margins caused by increased vibration, and the damage to critical parts (fan blade) from debris ingestion as mentioned in one of the other answers.

Since the fan blade was seriously damaged, the pilots likely shut down the engine (otherwise the vibration would have been insanely high). But as you mention a single engine shut down is not considered hazardous - we design for that situation. Nevertheless many pilots choose to land after a single engine shutdown.

Aviation is very safe due to the huge experience built up over the decades. Engine failures, as in the engine stops working, are accounted for in flight training and in aircraft design. Safety is in known circumstances, with very low tolerance for situations out of the norm as @corsiKa states.

But an engine cowling falling off is a structural failure, with unpredictable consequences:

A typical Level D Full Flight Simulator has about 300 failures which are part of the training curriculum of pilots. These are failures which can be handled by a determined procedure, as experience has shown. About fifty of these are engine malfunctions:

Note that by far most of these failures are of an engine function that stops working or does not start up when commanded. Only the vibration malfunction may be relevant to a structural failure like a fan blade broken off, but the vibration effects can be neatly calculated with physical modelling, in a predictable and determined way.

Due to the unpredictable nature of the engine cowling structural failure, there is a high degree of uncertainty as to what can and what cannot happen further once the cowling has fallen off; there are bits of structure flapping in the wind, there are vibrations caused by...what? The pilots can see failure effects on the instrumentation, but can be unaware of the exact situation. In the case of El Al 1862:

At 6:28:45 pm, the captain reported: "El Al 1862, lost number three and number four engine, number three and number four engine." ATC and the flight crew did not yet grasp the severity of the situation. Although the flight crew knew they had lost power from the engines, they did not see that the engines had completely broken off and that the wing had been damaged. The outboard engine on the wing of a 747 is visible from the cockpit only with difficulty and the inboard engine on the wing is not visible at all. Given the choices that the captain and crew made following the loss of engine power, the Dutch parliamentary inquiry commission that later studied the crash concluded that the crew did not know that both engines had broken away from the right wing.

Declaring an emergency in the case of the United B777 is fully justified. They are not falling out of the sky yet, but nobody knows for how long that will last...

It depends a bit on when it happens. For instance, American Airlines 191 suffered a complete engine loss (it literally fell off) during takeoff. It caused significant hydraulic damage and, due to retraction of the slats on the left wing, caused the airplane to roll over and crash. It's possible the same incident at a higher altitude would have been more recoverable.

The United incident happened at cruising altitude, and only involved the outer cover. The immediate threat is that the engine ingested debris. From pictures of the front, you can see it completely destroyed one fan blade and may have partially damaged another (the pilot likely shut it down, assuming the computer didn't automatically). The vibration in the airframe was likely a result of the loss of the aerodynamic parts in an asymmetric way (problematic but not life-threatening). 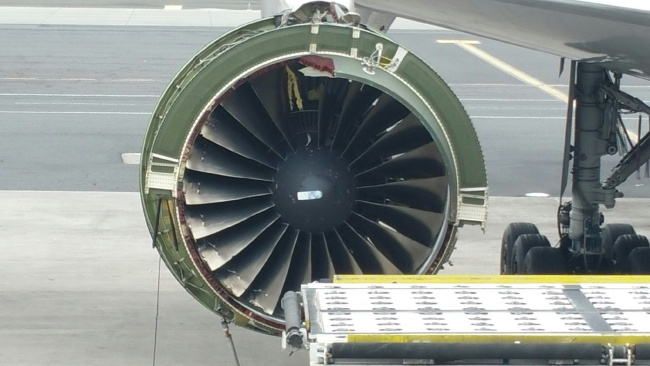 Ironically, this happening on a route to Hawaii meant the aircraft was ETOPS certified, meaning it is more fault tolerant for an engine failure like this.

The airplane-engine combination should maintain a target IFSD (In Flight Shut Down, defined as "When an engine ceases to function (when the airplane is airborne) and is shut down, however briefly, whether self induced, flightcrew initiated or caused by an external influence.") rate at or below 0.02 per 1,000 engine-hours for 180min ETOPS approval.

Even though there is already accepted answer which is good I would like to add my 2. Source: Masters in gas turbine (jet) engines design.

This is extremely serious issue for a flight. The part that “fell off” is responsible for the air intake and initial compression (before it hits the first stage of compressor). Such change in geometry very likely to change intake pre-compression ratio and cause airflow to more turbulent, which is Not good for the first stage. Debris from the damage are guaranteed to damage first stage of compressor which is very dangerous as the first blade disk is the heaviest and therefore easiest to lose the balance and cause further damage to the engine.

The incident like this could potentially cause serious instability in engines rotor and send the first stage compressor disks flying through the cabin.

Shutting down engine mid-flight in such situation is the only sane way to ensure that the further damage is not done, therefore all aircrafts designed in a way that allows for loss of up to 50% of engines. Thus in civil aviation medium and large capacity aircrafts are equipped with minimum of 2 engines.

However, even though flight could technically continue on remaining engines, single engine failure implies that there is a possible oversight in pre-post-flight checks, and the crew is required to perform emergency landing procedure in the nearest possible airport.

Worth noting that command to “brace for impact” may have nothing to do with real situation as it is standard procedure for emergency landing and does not constitute real possibility of rough landing.

Not the answer you're looking for? Browse other questions tagged safety jet-engine airliner or ask your own question.

11
Can a dual-engine aircraft take off with only one engine?
14
How dangerous can it be if something falls from a flying aircraft?
9
Why do engine cowl lips appear larger and more blunt on the sides than on the top and bottom?
7
Why is volcanic ash hazardous?
14
What happens to the fuel lines when a jet engine falls off?
5
How is risk managed in single engined piston aircraft flights?
4
Is "laze" (lava + haze) as hazardous as volcanic ash to turbo engines?
5
What safety issues led the FAA to ban Constellation flights into/out of the U.S.?