What is the history of "Joker" and "Bingo" fuel terms?

Why do we use, in military aircraft, the words "Joker" and "Bingo" to indicate the fuel status of the aircraft? What is the history of these two terms?

The official US Navy definition of "BINGO" is: "An order to proceed and land at the field specified, utilizing a bingo profile. Aircraft is considered to be in an emergency/fuel critical situation. Bearing, distance, and destination shall be provided." 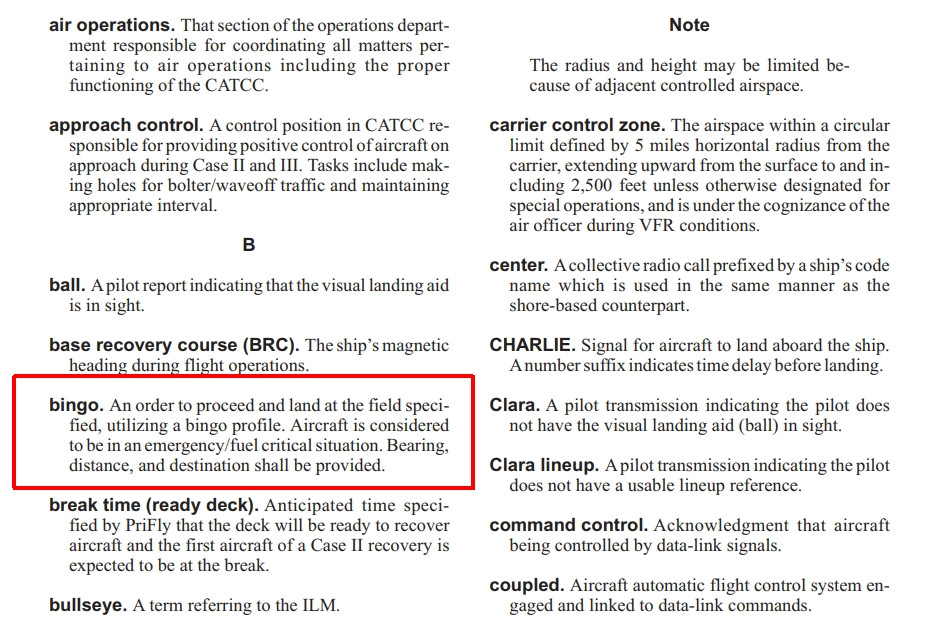 If the aircraft carrier was operating in an area that had a land based alternate airport, it would be called "Bingo Ops". "Bingo Fuel" was the amount of fuel remaining to safely reach the "Bingo Field". The "Bingo Field" was the closest land based airfield which could be used as a backup in case the aircraft was unable to land on the aircraft carrier for any reason. Examples could be a fouled deck due to a disabled aircraft, or unusable arresting gear system.

Other military, and even civilian operators, have since adopted "Bingo Fuel" to mean minimum fuel to safely reach an airport.

My own research shows that there is no definite answer to the origin of Bingo.

"Joker Fuel" is a predetermined amount of fuel in excess of Bingo Fuel.

joker fuel was "wild card" your guess is as good as mine however I bet you my guess is better than yours, initiating to command and everyone else listening in that, you have doubts about ground support and that you think the enemy could be amongst you.

Not the answer you're looking for? Browse other questions tagged military usa fuel terminology or ask your own question.

18
Is there a difference between "aerobatic" and "acrobatic" flight?
10
Why do military aircraft use a different kind of aviation fuel?
11
What is the origin for "squawk" having two different meanings in aviation?
6
What is the difference between the words "airlines" and "airways" semantically?
4
What are fuel biases?
6
What passenger airplane has the lowest fuel efficiency?
3
What are the areas of an aircraft that suffers most from G forces?
8
What is the purpose of squawking 7777?
0
What is the origin of the following aviation slang terms?