What is that decommissioned plane near Nadirgul Airfield?

This is a decommissioned plane that I found at my place. I'm guessing it is a Dakota DC-47.

The plane is placed near a small airstrip called Nadirgul (name of the location), which lies in the outskirts of the city Hyderabad, India 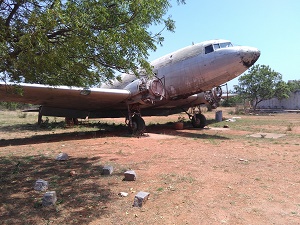 This is right, this model is a C-47A-85-DL Skytrain, a variant of the "Dak" DC-3 selected by the US Army Air Force in 1941 as its standard transport aircraft.

It has been early used by Allied forces to drop paratroopers and equipment or to tow gliders behind the coastline for the D-Day and operation Overlord.

C47 from 439th Troop Carrier Group and Waco with their invasion stripes taking off from England for Utah Beach, June 1944 (source)

It had a long history and was everywhere until the end of the war and in the post-war conflicts, e.g. many of them participated to the Berlin Airlift:

Differences with the DC-3 include:

You said the aircraft was standing at Nadargul airstrip. This information has been very useful to find the exact aircraft. It happens the aircraft did have a long story, throughout eras of war and peace, linking people of many countries:

This aircraft is seen in the 1965 Hindi feature film, Gumnaam (video):

The aircraft was used for the first aerial mail sacks sent in 1948 from Israel to European countries, when it belonged to Air France. Two stamps commemorated in 2008 "60 Years of Friendship between Israel and France":

On June 9, 1948 an Air France DC3 airplane, registration number F-BAXK, landed Haifa, flown by pilot Georges Bernard and two crew members: communication technician Mr. Sortais and mechanic Mr. Boutet. The plane made an interim stop in Bucharest while en route to Israel, thus arriving with mail from both France and Romania. The plane subsequently left Haifa on June 11 at 6:36 a.m., bearing mail to France and other countries with which Israel had re-established postal ties: Bulgaria, Holland, Hungary, Yugoslavia, Poland and Switzerland. It also carried a mail sack bound for New York. After interim stop in Cyprus, Greece Italy and Nice in southern France, the airplane took of the next day towards its final destination, Le Bourget airport in Paris, where it landed on June 12, 1948 at 11:01 a.m. and delivered its mail sacks.

Since I can't really see the full length of the aircraft in your picture, if you roughly know the wingspan, you can identify the aircraft.

18
How do you visually identify aircraft from the ground?
13
What is this partially disassembled aircraft in the desert?
13
What aircraft did this canopy come from?
25
What happened to this airplane at Lombok Airport?
5
What aircraft is this flying near Greenford?
11
What is the plane on the Home Bush Bay Funsaver EP cover?
14
What is this plane with its thick cockpit?
7
What variant of Mi-8/Mi-17 is this near Kennedy Space Center?
21
My N number showed up on another plane's flight on FlightRadar24. How does that happen?