What is the shape of the power required curve?

I understand that when flying level, some power is required to maintain altitude, this power amount being:

Being on the backside of the curve means flying in an area of strong instability, possibly reaching the stall point if not managed correctly.

Question: What is the shape of this power required curve for a small GA airplane, and for a large commercial airplane?

I mean is the backside a small portion where it is unlikely to be without obvious pilot mistake? (left hand side below) or is it a large area where it is easy to fall? (right hand side)

What is the shape of this power required curve for a small GA airplane, and for a large commercial airplane?

The answer depends on the span loading and flight altitude of the aircraft. For most practical cases, the left hand side power curve is more realistic, but it still can be entered if the pilot is unaware of what he/she is doing. Just witness AF447 …

The power curve is the sum of two drag curves, times flight speed:

Below I have plotted the theoretical power curves for a small GA airplane at sea level. The dashed lines show the power curve if no flow separation would happen. 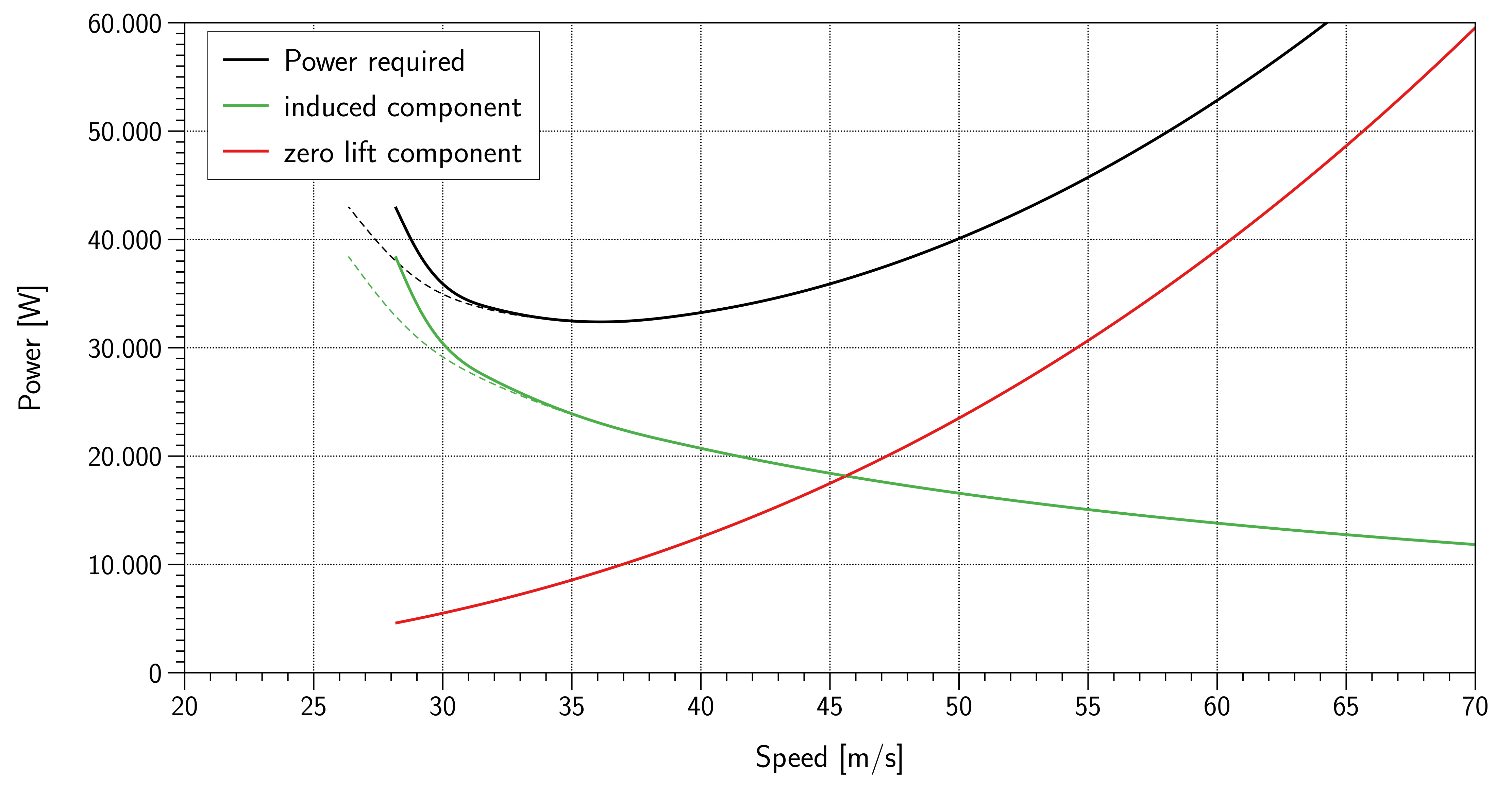 Aircraft with low span loading will exhibit low induced drag, so the friction drag (zero lift component) will become dominant soon. The higher the airplane flies, the more the available power is reduced and the induced drag is increased, so the power curve will shift to something resembling your right plot. The point splitting the left side of the curve from the right side is the point of minimum power. Where is this point for actual configurations?

Since you asked about a commercial airplane, here we go: $$c_{L_{min.\:power}} = \sqrt{1.67\cdot 0.01277\cdot\pi\cdot 9.58\cdot 0.74} = 0.687$$ This is for the clean configuration of course and falls between the glider and fighter values. The numbers for a GA aircraft are a little higher (around $c_L$ = 1) due to the piston engine, with a higher Oswald factor due to an unswept wing and a somewhat lower aspect ratio. Commercial aircraft prefer to cruise close to the minimum drag point, which for this example is at $c_{L_{min.\:L/D}}$ = 0.532, so at altitude their operating point is already quite close to the backside range. In contrast to that, a GA aircraft in cruise will fly low (no pressurisation) and much faster that at its minimum power, so its cruise point will be far to the right of the backside range, making the power curve look more like your left hand side example.

Not the answer you're looking for? Browse other questions tagged aerodynamics fixed-wing or ask your own question.

0
Is there a graph that shows the thrust required for a given airspeed?
17
Is the Centre of Gravity moved by an aircraft travelling at “High Speeds”?
17
Why would maximum fly-time (endurance) not coincide with max L/D operating point?
8
What is profile drag?
2
Why did the pilot flying pull back in the moments after the auto-pilot disconnected on AF447?
3
Can briefly explain the principle behind the inversion on this power required curve?
2
Does the flap settings for the best lift/drag ratio change with speed on the Diamond DA20-A?

7
What is (theoretically) the most efficient shape for an aircraft, assuming you don't have to carry any cargo?
6
The stronger the headwind the faster the plane flies if it is in the reverse command regime?
0
What is the relationship between drag and sink rate?
2
How does the power requirement change when weight and speed change?
2
Is the airspeed for the minimum the same for the theoretical power required curve as for the shaft power required curve?
2
What are the disadvantages of a tailless ultralight design?
0
RC airplane required engine power
1
How do power and thrust curves compare?
8
What is causing these "corners" on this F-104 V-n diagram?
11
Is the compressor required on jet engines? Can air be rammed into the turbine?