Why did the flight Osaka -> Frankfurt circle above the airport after taking off from Osaka International?

When departing form Osaka International (KIX) the Osaka city passed below twice, the second time much lower. Looks like our 747-400 was circling up in spiral before heading a long way over Russia to Europe.

I understand the reason of flying in circles before landing (holding pattern, waiting in a queue for landing). But why circle over the airport of departure? I think it could be more economical and faster to pick the altitude while heading in a needed direction. Is there also a queue to leave the airport? Why not to wait on the ground then?

Looking at FlightAware, we see this takeoff for your flight: 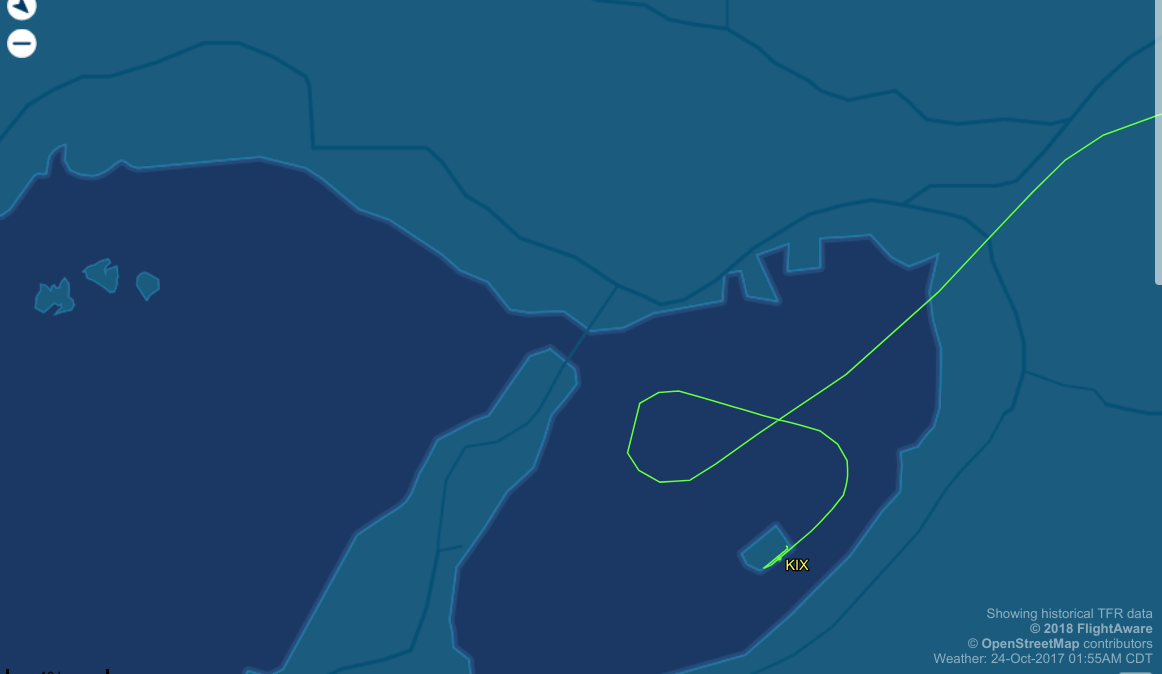 Examining some airport charts for KIX, this looks like the standard departure NANKO REVERSAL THREE DEPARTURE from runway 06R. 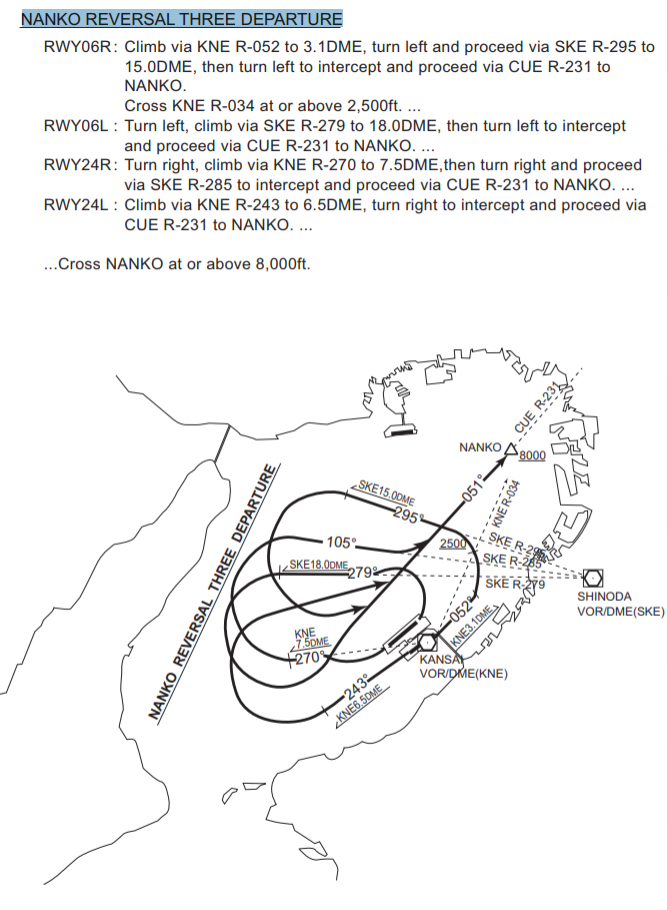 I guess that the loop is to give the aircraft enough time to climb to 8000 before it reaches NANKO. And, I guess the 8000 feet is for either terrain or noise abatement (notice the climbing loop is entirely over water.)

The NANKO ONE Departure, as already written by Robᵩ, is one of the most used departures out of KIX/RJBB.

The unusual design with the climbing pattern over the bay is used to minimize interference with the traffic in and out ITM/RJOO Osaka International Airport also known as Itami Airport in the north of the city and to reduce noise over populated areas. But let me explain in detail: 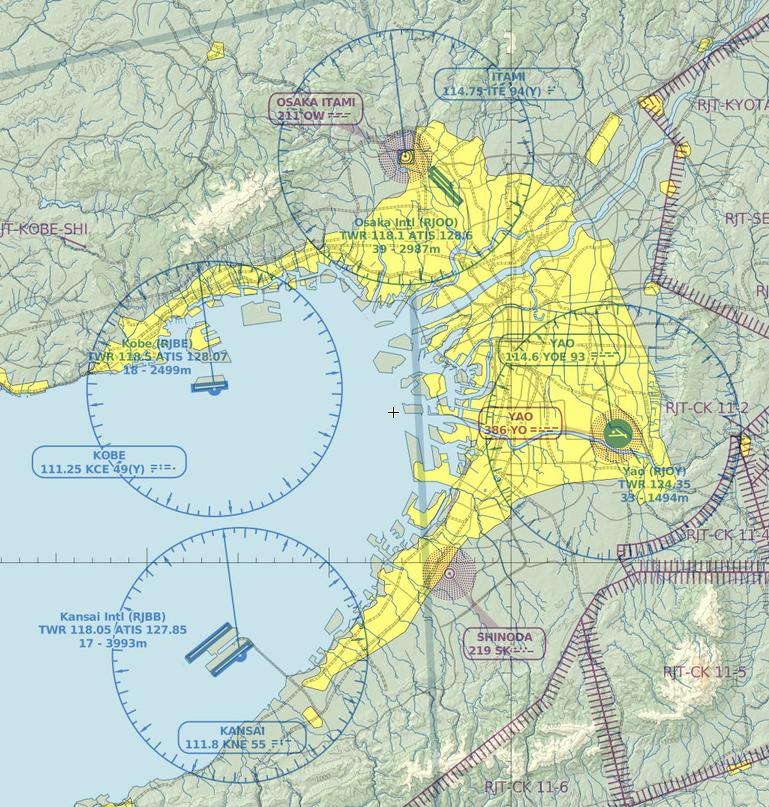 The Osaka Bay area is densely populated and served by numerous airports, airfields and helipads. For your question we concentrate on the following four airports:

The area has two large airports:

and two smaller ones:

You might have noticed that the runway systems of KIX and ITM are perpendicular to one another. Kobe and Yao have runways parallel to each other but at a 45 degree angle to KIX and ITM. This poses a problem with arriving and departing traffic to all four airports.

Think of wind from westerly directions. In this case ITM uses RWY32L/R und KIX uses RWY24L/R. Normally you line up the arriving traffic on the runway centerline about 15-20NM out. Keeping this in mind the arriving aircraft will cross their path somewhere in the east of Osaka. Additionally UKB will use RWY27 and their arriving traffic is crossing the path of the two others as well. Add Yao (RJOY) departures on RWY27 into the mix and you have a nightmare ATC-wise sorting and spacing the traffic to avoid separation conflicts. This reduces the capacity of all involved airports as the spacing between arriving flights has to be bigger to accommodate for arriving (and departing) flights of the other airports.

Now to your case - departures with easterly winds. In these conditions KIX uses RWY06L/R as you did on your flight. ITM will use RWY14L/R. If both airports used straight out departures you have a crossing situation similar to the arrivals with westerly winds. Add Kobe (UKB) using RWY09 to the mix and you have three departure routes crossing. To add some flavor for the controller there might be an arrival into Yao (RJOY) RWY 09. Another ATC nightmare.

The described situations above are all based on hypothetic straight out departures and arrivals. You surely know that, as a rule of thumb, an aircraft makes more noise the higher the flap setting. Departures and arrivals over populated areas introduce a lot of unwanted noise into local communities. This is therefore something to be avoided.

A solution to most of the problems described above lies in the unusual airspace and departure/arrival procedure design. Lets have a look at the KIX arrivals first: 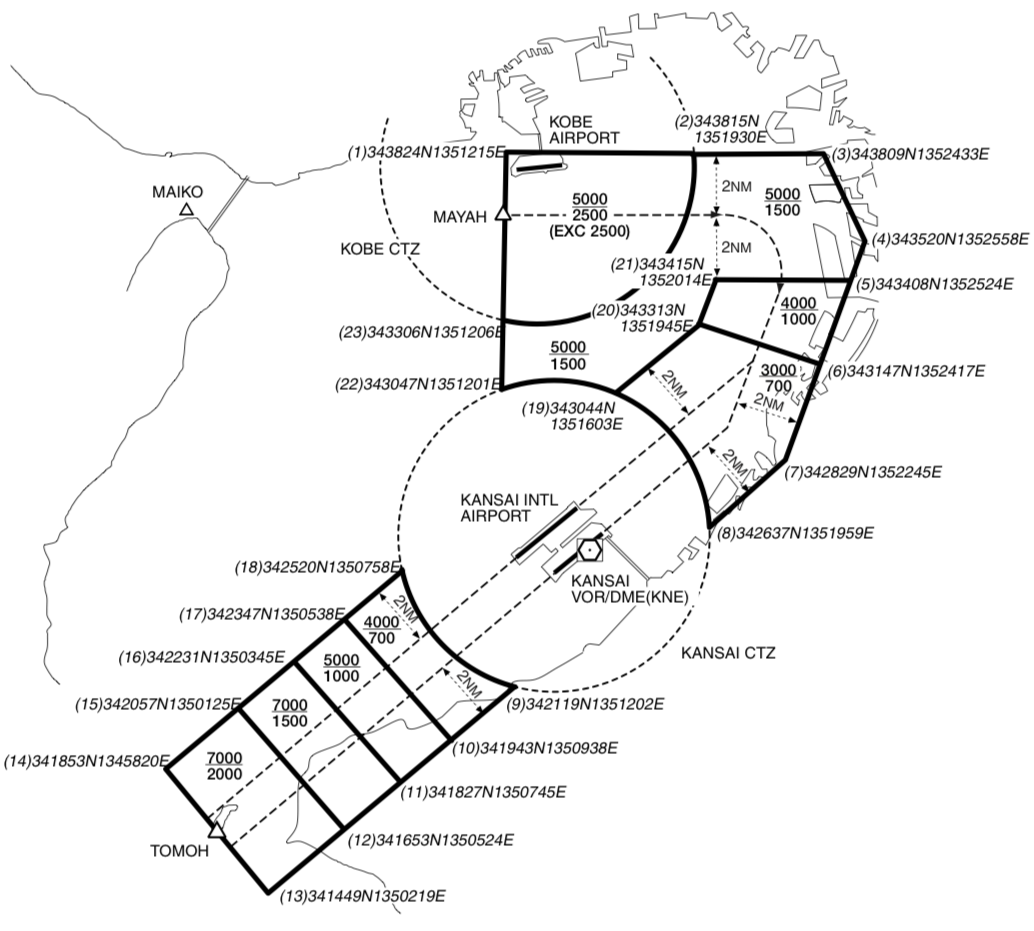 The image shows the final approach for both directions. RWY06L/R is rather straight forward. From TOMOH straight on the centerline all the way down to the runway. RWY14L/R is a different beast. At MAYAH you are far from aligned with the runway centerline. You are basically flying in the wrong direction. But it avoids Kobe (UKB) neatly and stays clear from the ITM area further north-east. Additionally it keeps the noisy aircraft (flaps and gear extended) over the water. 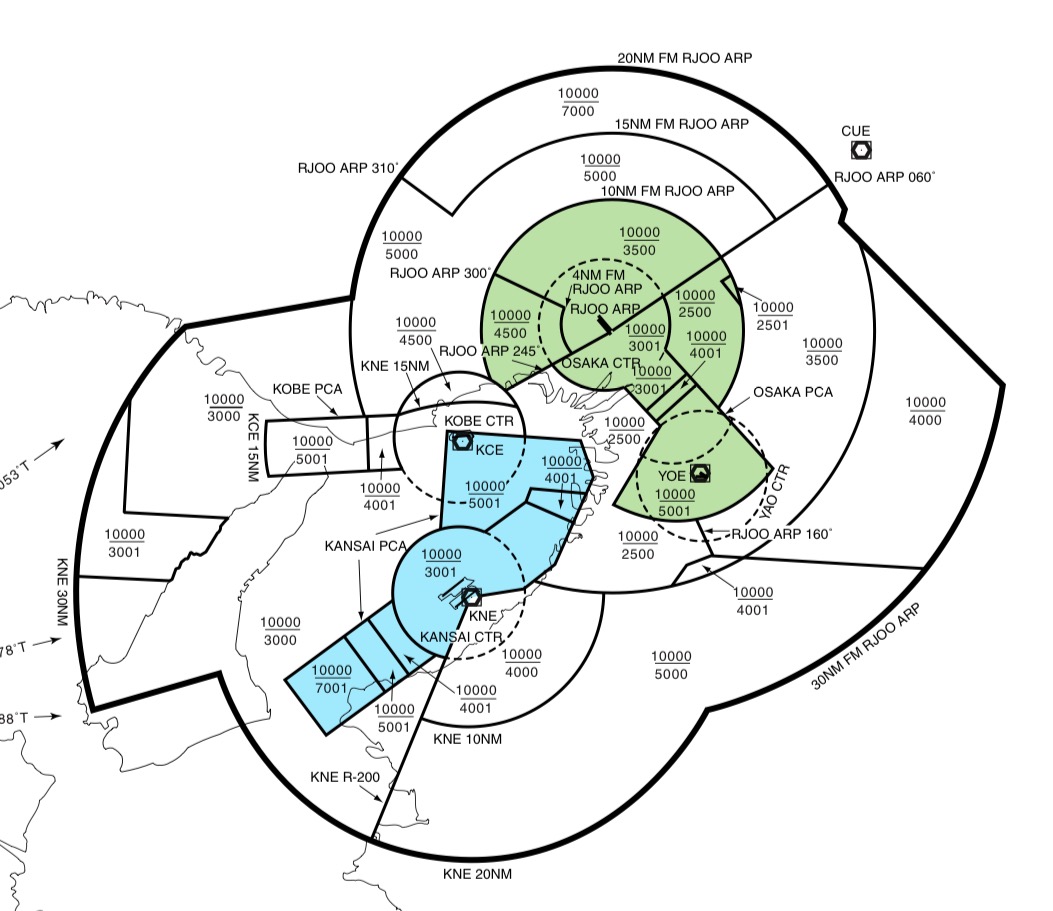 Cropped from the Japanese AIP RJBB AD2.17 Terminal Control Area and colored by me.

I highlighted the relevant KIX airspace in blue and the ITM airspace in green. You can imagine the "funnels" to guide the traffic in and out of the airports. This way you have the traffic for both airports separated.

But whats about departures to the north-east like your Lufthansa flight? You need to cross the path of the traffic of the other airport somewhere. Here, the magic sauce is vertical separation. Just keep one traffic flow way higher than the other and you avoid the need to separate them from each other manually. The straight line distance from the runway in KIX to NANKO is too short to reach the required altitude to stay clear of the other traffic. That is basically the reason for that "circle" you flew on departure. 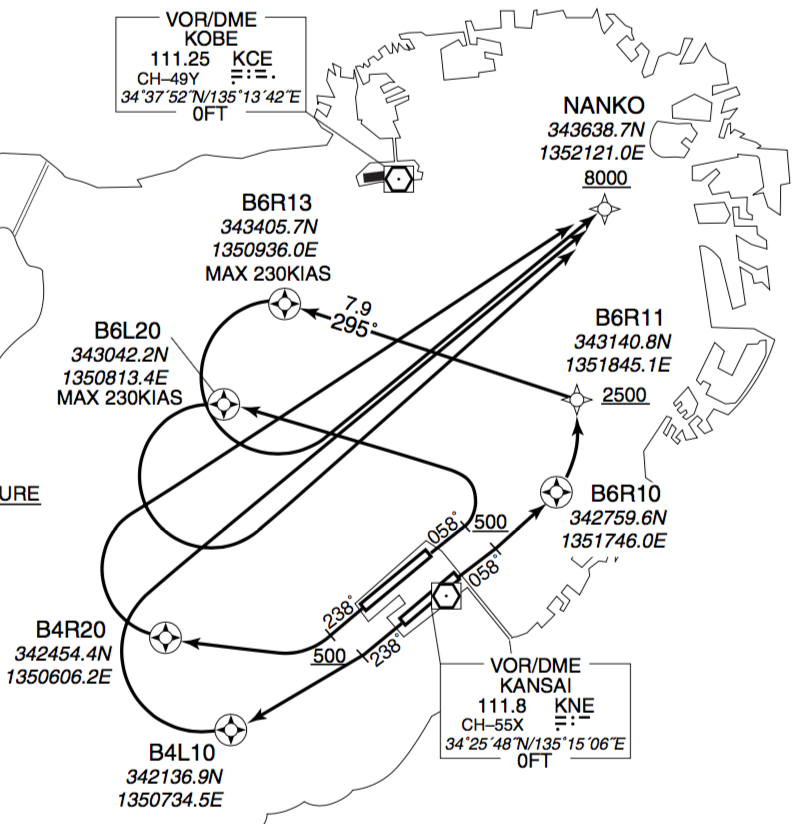 I hope this explains it in more depth - feel free to ask for clarification.

The reason is to keep you over the water in the climb for noise abatement for the city. Japan is very noise sensitive. You climb to get higher over the water at high power settings before going over land. Hence you are at a higher altitude which equals less noise for the city.

Not the answer you're looking for? Browse other questions tagged takeoff long-haul or ask your own question.

22
Why do the engines seem to power down and then back up after take-off?
6
Why circle an airport after takeoff? (SLC particularly)
10
Why is the IFE only available after take-off and shut off before landing?
32
Why can't runway 18 at Frankfurt Airport accept takeoffs or landings in the opposite direction?
15
Why not use flaps in take off from High Density Altitude airport?
9
What is the distance from an airport from which an airliner climbs above 550 m?
18
Why is the DC-9-80 ("MD-80") prohibited from taking off with a flap setting between 13 and 15 degrees?