It is generally understood that the fuel tanks of aircraft are in the wings, but specifically, is the entire length of the the wing of:

What percentage of the wing length is used as a fuel tank and for what reasons, for:

Fuel tanks take most of the space in aircraft wings, but not all. There are other things on wings too. They are ailerons, flaps, slats, air brakes. On most airliners, the engines are attached to the wings too, so their assembly takes up space.

On the two aircraft of your interest, here are the pictures:

A380 (its nickname is not jumbo, but superjumbo) 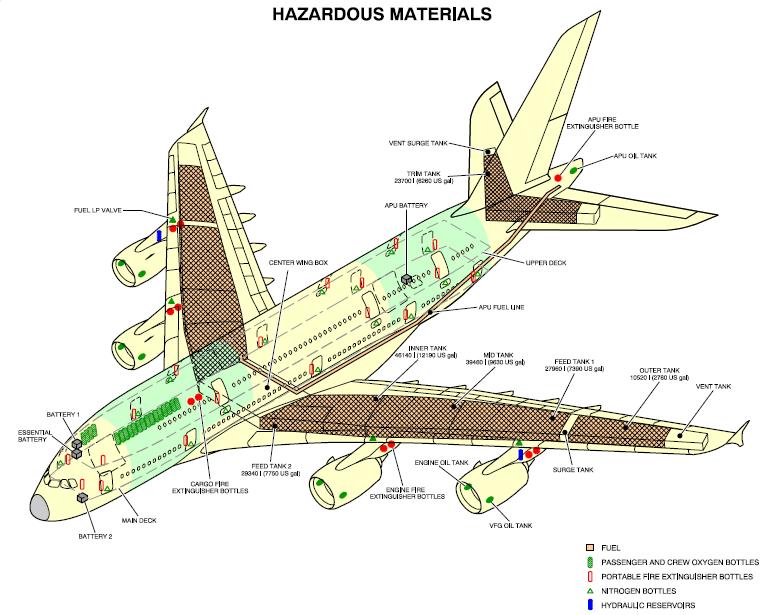 Your question regarding how much length of the wing is filled with fuel has been answered well. If you are wondering how the location of the front and back walls of the fuel tank are determined and designed, here is the answer:

The existing wing structure of front and rear spars and upper and lower wing skins act as an integral wing fuel tank. When the wing is assembled sealant is applied between all parts to make the wing water-tight. Integral wing tanks are primed with special yellow paint which acts as a barrier against the fuel to protect the aluminum structure. Perfectly sealing the inside of the wing is very important. There are many Quality Assurance inspections and a final leak test.

The composite fixed leading edge and fixed trailing edge which complete the forward and aft section of the wing structure and contain the flight controls are attached to the front spar and rear spar respectively.

An airliner wing will have a "dry bay" just over the engine strut/pylon for safety in the event the engine were to experience a catastrophic failure where compressor or turbine blades were thrown into the wing tank.

On a 777 the Dry bay area is blocked out by a composite piece that is secured and sealed in place. Each wing will usually have one dividing wall in it in the vicinity of the engine pylon (everything inboard from that point is considered the center wing tank, including the center wing section/tank).

Airliners with 4 engines will have each wing divided into at least 2 sections (one to feed each engine). As you can see in the illustration in a previous reply, the 747-400 has 3 tanks per wing plus the little surge/vent tank at the very end.

The end of the wingtip will have a vent area where expanding fuel vapors can escape (and may be called a "surge tank"). Look for the little NACA intake duct on the underside of the wing, which also brings air in to replace the fuel that is being used by the engines so that the fuel can flow freely out of the wing without suction being created.

On modern airplanes especially (like the 777 and later) the very extreme end of the wing (beyond the surge tank) is not very substantial in construction (made of very thin material) and is therefore not used to store fuel.

The raked wingtips of the 767-400, 777-200 LR, 777-300 ER and 747-8 are extra extensions added on to the end of where the "official" wing box structure ends. These of course do not contain fuel because they are a very light, thin composite structure just strong enough to take aerodynamic loads.

Not the answer you're looking for? Browse other questions tagged wing airbus-a380 fuel-tanks boeing-747 or ask your own question.

9
What is the optimal wing sweep angle for a passenger airliner?
17
Why was the A380 built with a gull-wing design?
3
What is the speed record for the Boeing 747 and Airbus A380?
14
How are wing tanks sealed around the internal wing structure?
1
What is the maximum temperature of engine bleed air for de-icing the wings?
3
How much fuel does an A380 hold and where?
5
How large are the pilot rest areas of the A380 and B747-8?
5
Is there any particular reason the A380 doesn't have a centre wing tank?
8
Why does a Boeing 747-8 take more runway length to take off, compared to an Airbus A380?