Why is Emirates not considering buying or leasing used A380s?

Airlines such as Korean Air are retiring their A380s. They are struggling to find buyers/lessors. In such a scenario, Emirates could easily obtain used A380s at cheap prices.

Is Emirates not leasing used A380s because of the costs involved in re-configuring of the aircraft? Since the A380 is an expensive aircraft, I feel that even with added costs in changing seating layout and maintenance of aged aircraft, it might be economical to consider used planes.

We have to also consider that since its the same aircraft, customers won't notice any difference in service or comfort. 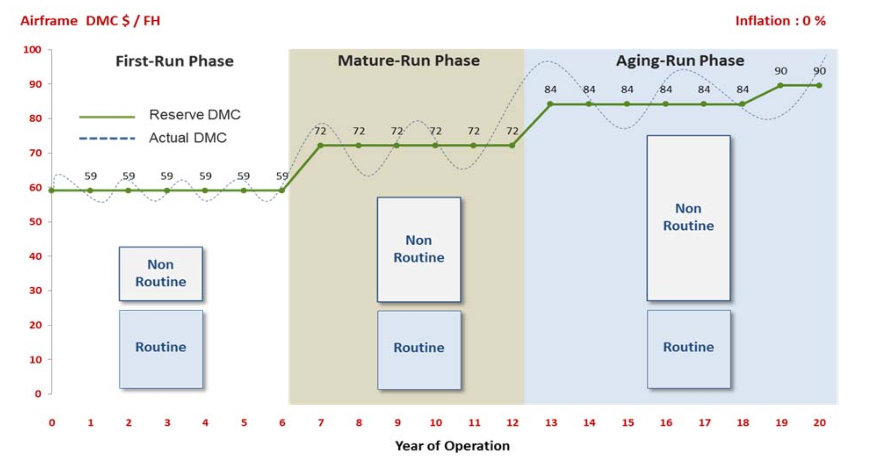 Used airplanes are costlier to operate and maintain. Take Ryanair for example, they have 420 Boeing 737's with an average young age of 6.8 years. That age is very important.

The graph above shows the direct maintenance cost of an A320 for the airframe, similar graphs are available for the other systems. Note when the first period ends.

First-Run is the initial operating years, often referred to as the honeymoon period and generally considered the first 4-6 years of in-service operation. The structure, systems, and components are new; and there is less non-routine maintenance and material scrap rate.

The following serves as both a proof and an answer: Airbus is buying back the older A380's in the new deal with Emirates for new A380's.

Airbus (AIR.PA) will have to buy back or find new homes for some of the older A380s currently operated by Dubai’s Emirates as it finalises a deal to sell new superjumbos to the Gulf carrier.

The decision by Airbus to buy back aircraft to facilitate the anticipated deal comes as the aviation market struggles to absorb some of the first A380s, which entered service a decade ago.

Something Airbus is wary of, they don't want to see an A380 in the boneyard so soon.

Airbus is seen as keen to support the second-hand market to avoid having to break up one of the planes, a potential public relations setback as it tries to breathe new life into the iconic European programme following recent production cuts.

Emirates has just agreed to buy 20 more A380s (with an option for 16), but very few other airlines are interested because they carry too many passengers. That makes them very inflexible for an airline on which routes they can fly, and be profitable. To be profitable, you have to fill almost all the seats, every flight, all year round. There are only so many routes that can do that, and Emirates have already sucked a lot of those passengers up on their existing routes, flying through their Dubai hub. There aren't a lot more passengers to attract, so they do not need more A380s.

"The A380 is not made for every route, but it is ideal for high-traffic routes, high-volume routes that are congested or where there are flying constraints,"

(From "Bigger isn't always better: Why the A380 super jumbo is struggling to take-off").

And, if there is a slight downturn in passenger numbers, there's not much you can do with an A380, but fly it a bit empty. However, if you have smaller aircraft, you can run two medium aircraft when the demand is heavy, or one medium and one small one when the demand is a bit less, or just one small one, in the off-season. But... you can't do that with an A380. You either go 3/4 full, or not at all. So, it's inflexible for route planning.

Qantas originally order 20 of the double deckers but decided to only take delivery of 12. According to Joyce, the Dreamliner offers the airline more flexibility and lower financial risk especially on routes with inconsistent or seasonal demand.

(From "We may have just witnessed the end of the A380 super jumbo").

So, simply, the A380 is too big. It makes an airline put all their eggs in one basket, and only Emirates had the routes and traffic to buy it in any quantity.

Several reasons come to mind. Emirates just announced two days ago that they have concluded an A380 deal for 20 more firm orders and options for another 16. I suspect these orders will “fill” existing current slots. It is true that several airlines have begun to decommission some A380’s from service. The lease of these aircraft have expired and the airline, (i.e. Singapore Airlines) has decided not to renew the lease or buy it out. It should not imply that Singapore Airlines did not make a profit using the aircraft, it probably did.

Instead, it is very likely that Singapore management believed the future profitability was going to be limited based on current economic conditions such as rising oil prices and stiff competition on some long-haul routes. Another factor is that Singapore Airlines still has 4 more A380’s to be delivered from its original order it placed in 2009.

Those that are being rotated out of service will possibly have a new A380 take their place. So I am not clear how the question can imply that the airlines are not making a profit with the A380.

Not the answer you're looking for? Browse other questions tagged airliner airlines airbus-a380 or ask your own question.

2
Do airlines in Middle East use higher cost indexes?

10
Why is thrust vectoring not used on commercial jets?
8
Why did the CAA not use Monarch aircraft to repatriate stranded Monarch passengers?
5
Why is the GP7200-powered A380 fleet not grounded?
24
Why are winches not used for towing commercial planes up?
9
Why are parking brakes not used for parking jetliners?
5
Why did Emirates order so many A380s?