I've seen different callsigns for en-route air traffic control, including Center, Radar, and Control (and Radio?). I suspect the only difference is the geographic location - Center in the U.S. (e.g. Salt Lake Center) and Radar and Control in Europe (e.g. Langen Radar, London Control).

Are there any other differences besides location? (is the location-assumption correct?) If not, why is it not standardized then?

The 'Center' suffix is indeed more common in the US for the en-route call-signs under radar control. There is also New York Radio, for example, for the non-radar service over the Atlantic. Another example is the 'Director' suffix that is not common in the US, but is common elsewhere for the final approach controller.

5.2.1.7.1.2 The unit or service shall be identified in accordance with the table below except that the name of the location or the unit/service may be omitted provided satisfactory communication has been established.

Above are the standards, but nations are free to deviate. Below is from the UK AIP listing the differences: 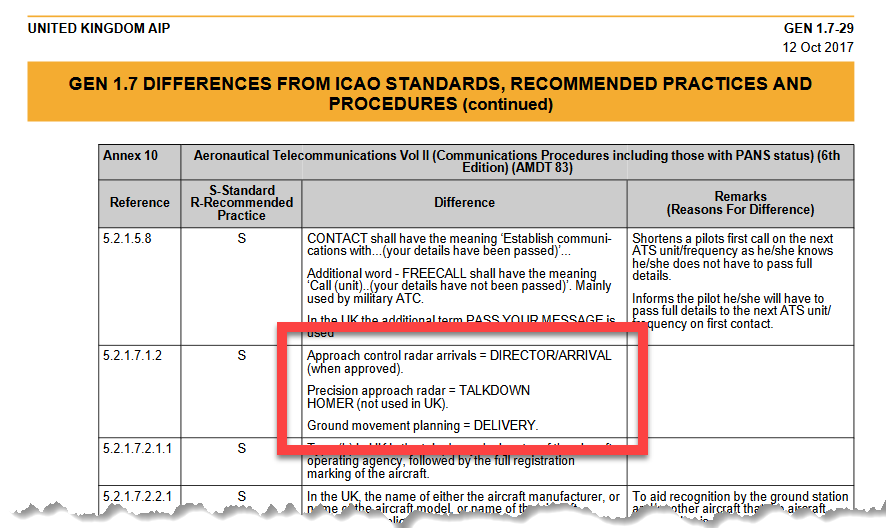 And from the US AIP:

The U.S. does not use the term "area control service" to indicate controlled flight in controlled areas. The U.S. equivalent facility for an Area Control Centre (ACC) is an Air Route Traffic Control Center (ARTCC).

Related: Where to find the callsigns of the en route controllers?

Actually, it is standardized, but not in the way you assume.

For example, a station named Springfield Radio won't offer radar or ATIS service; if it did, the suffix would be different ("Radar" and "Info", respectively, in this case). Just by a quick glance at the call sign, or overhearing it on the radio, the pilot can know what to expect from them.

There are a number of different "ATC" authorities:

Responsible for the movement areas on the physical airport. This includes both aircraft and airport service vehicles. Aircraft refer to this as "Ground".

Manages arriving and departing aircraft, usually takes over responsibility for aircraft as they approach a runway (take-off clearance) or as they approach the airport (hand-over from approach control).

Manages the airspace around the airport for departing flights providing separation and routing. Sometimes combined with Approach Control.

This is the first authority you talk to that is actually located at the airport. Manages spacing and arrivals and usually assigns runways. Also called "Terminal Control" and may be combined with departure control.

This is the authority you talk to when you are going between airports. Usually a center controls a large area of airspace and can manage aircraft in those areas. Here are a list of FAA Centers, called "Air Route Traffic Control" or ARTCC for short. On the radio pilots usually use the term "Center".

This is a service provided to pilots but is not an air traffic control authority. Pilots may open/close flight plans or get en-route weather information on these frequencies. They are usually called "Radio", for example, "Stevens Point Radio, N12345 on 131.2"...

☆ - Typically located on the airport which the pilot is operating. This is not always the case though, there are remote towers and satellite airports that may include these services but not have them co-located with the field.
Share
Improve this answer
edited Feb 2 '18 at 15:42
community wiki
2 revs
Ron Beyer
$\endgroup$
add a comment  |

Not the answer you're looking for? Browse other questions tagged air-traffic-control call-sign or ask your own question.

12
What ATC entities does a commercial airliner communicate with?
6
Does ATC react to pilot position reports?
1
Where to find the callsigns of the en route controllers?

16
Why are some ATC call signs different than the flight number?
13
Will ATC proactively route traffic around bad weather?
2
What are these suffixes used after the call sign?
5
What Does “By ATC” Mean for an SID Route?
11
How can a sUAS operator contact ATC/identify themselves when contacting ATC?
1
Where to find the callsigns of the en route controllers?
19
When replying to ATC, callsign first or last?
5
What does it mean for a ATC to say a flight's callsign followed by “in disguise”?
3
Are ATC assigned altitudes temperature compensated?