How should I request flight following when I'm not taking a direct route to my destination?

I want to plan a flight from KMSN - KDAY. My plan avoids the ORD airspace as much as possible, so something like:

What would be the phraseology to use to get VFR flight following to let ATC that I'm not planning the most direct route?

First of all: If you file a flight plan and select "VFR" the flight plan goes to Lockheed Flight Service only. ATC knows absolutely nothing about the flight plan; the only benefit you get is that when you run out your ETA and don't call to close the flight plan, someone will start looking for you.

When you call a Terminal controller (tower or TRACON) for VFR flight following (whether on the ground or airborne) we will make an entry in the radar system that looks like this:

What this actually does is create an ATC flight plan (not a VFR/FSS flight plan!) as if you were IFR direct from your departure airport to your destination airport, but where your altitude might be 070 for IFR flight your VFR altitude is instead VFR/075. The VFR/ prefix tells the system not to apply IFR separation to your tag, so the low-altitude alert will not fire and the system will not "snitch" on the controller if you get within three miles of an IFR aircraft.

Once you tag up, the system tracks you; your flight strip will print out at various control positions along your route of flight as you get near to each controller's airspace.1 Again, this will be based on a direct line from your departure airport to your destination airport.

1If the facility still uses paper strips. Either way your callsign and approximate entry/exit fixes will show up on the scope in the "tab list."

Let's look at your planned route vs direct: 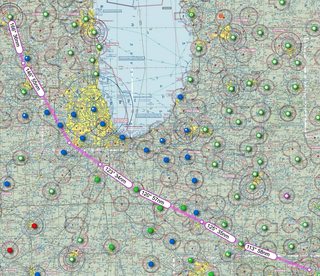 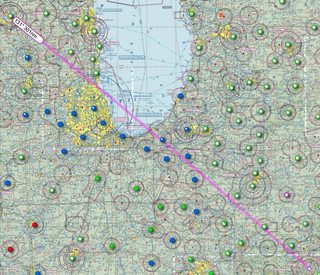 Cross-referencing this against a map of TRACON airspace, and double-checking by looking at various airports along your route of flight (the instrument approach plates will list the relevant control facility), it looks your planned route will take you through: MSN, RFD, C90, ZAU, GUS, possibly IND and/or ZID, CMH.

But a direct route would take you through MSN, C90, SBN, FWA, CMH. That's certainly different! And it's expecting you to go through different areas of those approach controls too.

This means when the Madison controller sees you nearing Rockford's airspace and tries to hand you off, the system will flip out because it thinks you should be going through Milwaukee's airspace instead. So the controller will go to a separate terminal that communicates with the mainframe at Chicago Center and will amend your route to show you going over some fix to the south of Madison, possibly even JVL (which you're actually navigating towards). Then the system thinks you're going direct MSN..JVL..DAY and allows you to be flashed to Rockford.

This process will have to be done by each facility you go through, and possibly by more than one controller per facility. What a pain!

In a case like this, where your route has so many turns, I might suggest filing a flight plan and selecting the "IFR" option instead of "VFR." This will ensure your flight plan is sent to the Air Traffic side of the operation instead of (just?) to FSS. For altitude you should enter your desired VFR cruising altitude, ideally prefixed with VFR/ if the system allows you to do that. If you are able to enter that prefix it will be very clear to the Clearance Delivery controller what you're trying to do. Then call up CD when you're ready and say something like

The same timing "rules" would apply to your flight plan as for an IFR flight plan, namely: The strip will not print out until 30 minutes before your proposed departure time (though the controller can amend the time and make the strip print sooner if you ask them to) and the flight plan will "time out" and be deleted if you aren't airborne two hours after your proposed time.

If you can't enter the VFR/ prefix in the flight plan form, at least enter the VFR cruising altitude. Then when you call Clearance, tell them you want to amend your altitude to be "VFR at x,500," for example:

Clearance, N12345, I have an IFR on file to Dayton, request flight following on that route flying VFR at 7,500.

Now they have to go and amend your altitude once instead of every controller you talk to having to amend your route. I think I saw this the other day, actually, because I had an overflight come through my airspace VFR with a whole bunch of fixes already entered on the flight plan and the altitude was just 075 without the prefix—and the strip didn't have an amendment number on it, meaning it hadn't been touched since the pilot filed it.

NOTE ON BOTH OPTIONS ABOVE: The FAA has issued an LOI saying that doing this shows "clear intent" to violate 14 CFR 61.3(e) if the PIC does not have an instrument rating, so use at your own risk. The LOI seems to say that even if you enter a VFR cruising altitude and put "VFR" in the remarks, checking the "IFR" box counts as filing an IFR flight plan—which sort of makes sense, but also doesn't, because the real difference is not "IFR" vs "VFR" but "Air Traffic" versus "Flight Service." Speaking as a controller, this LOI is backwards and unhelpful, and your filing this way would make things easier for everyone—but they pay me to separate airplanes, not issue legal opinions.

In the case of a simpler route, say MSN-CID by way of RFD (you want to do some sightseeing?) you could just tell the controller that when you make your initial request. Not a big deal to enter in one fix one time, and in fact the controller should in theory be able to enter a single intermediate fix even when using the radar keyboard... but this doesn't work at my facility. As abelenky points out, you could do it this way and say your route is MSN..EON..DAY or MSN..JOT..DAY, either of which line up pretty nearly to your more precise plan.

Or in a much simpler case, like MSN-RST by way of LSE (ten degrees difference on-course from MSN), don't even bother mentioning it unless they ask.

I have actually been in this situation a few times locally as I fly in and around the Philadelphia Bravo and usually take flight following for the advisories and incase I want a bravo transition.

Its important to note that flight following does not mean you are on an IFR flight plan or that you are under ATC vectors it simply means that ATC will give you advisories (mainly traffic and often weather when applicable). Technically you are free to fly around at your discretion (within the limitations of the airspace and regulations of course).

To request flight following in this case you can say

This provides enough information for them and the note that you will be taking a non direct course.

I would make the request as:

I don't think all the intermediate points matter, and I think the controller will quickly figure out what you intend.

They may ask for some clarifications, such as:

In the Center environment, it's probably best to simply make your request on the frequency,whether you've filed a VFR flight plan or not. Most VFR flight plans are filed through FSS, and are entered in their database, but are not transmitted to an FAA facility. If you were to file a flight plan with an altitude of say, 115, with "request VFR FF" in remarks, that would pass to the Center. The controller would recognize it for what it is, but the FAA, as mentioned above, would not take kindly to it.

For our purposes, we can obtain the necessary information for an abbreviated flight plan from you on the frequency. Takes less than a minute in most cases.

In your case, we'd need your call sign, type aircraft and equipment, and destination for a VP type of flight plan. If you give us your full route (KMSN..JVL..KARR..JOT..EON..KRZL..OKK..MIE..KDAY), I (personal technique) would enter it all in the database, but most controllers will enter the VP as direct to destination, and amend the route later, as needed.

If you told me, however, that you wanted to avoid a terminal area to the south, I'd do a (very simple) re-route around the terminal area. After that, if you went farther away, or closer, than I anticipated, I'd correct the route, possibly asking what your plans were, just to clarify.

The route information only needs to be precise enough that I can ensure the correct sectors get the information they need. Out west, in my airspace, you may go 50 miles off course to look at Carhenge before going on to Rapid City. It's all in one sector, so it doesn't matter much if your route is completely accurate. Around KORD, sectors are much smaller, and a controller may need more precise routing information to ensure everyone gets their data.

Not the answer you're looking for? Browse other questions tagged air-traffic-control visual-flight-rules phraseology flight-following or ask your own question.

1
If I am on flight following, do I have to be direct to my destination?
24
May a non-instrument pilot legally file IFR as long as he amends and doesn’t accept an instrument clearance?
15
Where can the airspace boundary coordinates for Fayetteville TRACON be found?
8
Does the FAA verify or authorize VFR flight plans?

29
When can I request flight following?
15
How should I request an IFR approach at the end of a VFR flight?
11
Why does a pilot want to hold a Squawk Code when leaving Class B airspace?
1
Is Autopilot NAV setting useful?
3
How can I plan a VFR flight through controlled airspace, without knowing what instructions ATC will give me?
1
Is a VFR flight following request implied when talking to tower and advising them of your intended airport?
1
What is the ATC phraseology to request a parallel track?
2
What is the proper procedure to change VFR altitude when changing heading from east to west?
3
How to Tell Flight Following You Want to Change Your Destination?
5
When filing a VFR Flight Plan, where/how do you include intent to use a Class B transition?