Sec. 91.157 Special VFR weather minimums. (a) Except as provided in appendix D, section 3, of this part, special VFR operations may be conducted under the weather minimums and requirements of this section, instead of those contained in Sec. 91.155, below 10,000 feet MSL within the airspace contained by the upward extension of the lateral boundaries of the controlled airspace designated to the surface for an airport.

Suppose I'm granted an SVFR clearance to land at KSTS (a typical towered airport with a Delta airspace and Echo surface extensions). Can I fly through the echo extensions with only SVFR minima? (e.g. for helicopter just clear of clouds) Or do the 91.155 minima apply. This really boils down the definition of "designated to the surface for an airport".

Does an SVFR clearance extend to Echo surface extensions to Class D airspace? No it does not.

In both cases the key phrase is "designated... for an airport".

Therefore the only practical purpose of a Class-E-to-surface "extension" is to extend standard Class E cloud clearance and visibility requirements all the way to the surface, for the protection of IFR traffic emerging from clouds at low altitudes. Once a VFR aircraft is above the level of the floor of the Class E airspace surrounding a Class-E-to-surface "extension" (typically 700' AGL), there is no practical significance as to whether the aircraft is within the "lateral boundaries" of the "extension" or not.

Also related -- much longer in-depth answers to these questions--

As an aside, in relation to interpreting the language of the ATC Handbook regarding where SVFR is authorized (7110.65W, para. 7-5-1-a 2), which lacks the "designated for an airport" or "designated to the surface for an airport" qualifier, it is relevant to note that the AIM, and the section headings of FAA JO 7400 "Airspace Designations and Reporting Points", both use the phrase "Surface Area" to refer ONLY to the Class-E-to-surface airspaces that actually enclose the airports whose approaches they protect-- i.e. the same class-E-to-surface airspaces that are described as "designated as a surface area for an airport" in the main body of JO 7400-- and not to the Class-E-to-surface "extensions". The "extensions" are never called "surface areas" in these documents.

If anyone can come up with ANY written guidance from any FAA source on the exact original question (or the one re FAR 91.155c), that is written SPECIFICALLY to address SVFR operations, and gives an EXPLICIT clear answer without making the reader parse the regs, AIM, and other relevant materials to come up with an understanding of the meaning of phrases like "designated to the surface for an airport", "within the lateral boundaries of controlled airspace designated to the surface for an airport", "within the lateral boundaries of the surface area of Class E airspace designated for an airport", "Designated as a Surface Area", and "Surface Area", then PLEASE add a link to that material here. Regardless of whether the material is recent or older, or supports or contradicts this answer. Likewise for that matter for any content SPECIFICALLY addressing the ultralight question re FAR 103.17. Research on related topics suggests that it would not be at all surprising if the FAA has not been entirely consistent with its memoranda, rulings, and interpretations on these issues.

On 01-26-2010, a query asking whether SVFR is available in Class E extensions was routed to FAA ATC Headquarters. Below is a response to that query from the FAA ATO Western Service Center:

FAAO 7400.9T par 6002. Definition of Class E2 airspace: "The Class E airspace areas listed below are designated as a surface area for an airport."

The language in FAR 91.157 exactly matches the language in FAAO 7400.9T par 6002. Par. 6004 does not match and the FAR does not permit SVFR operations in the lateral extension of a surface area designated for an airport; only within the vertical extension.

Presumably this could be corrected if we indeed want to provide for SVFR within lateral extensions, but it is currently not permitted.

There are other operational issues involved: eg. an extension to a Class D surface area where the tower provides SVFR services within the Class D airspace as is permitted via LOA. They cannot issue a SVFR clearance in the E4 extension. If permitted, the controlling agency, presumably the ARTCC would have to do this. 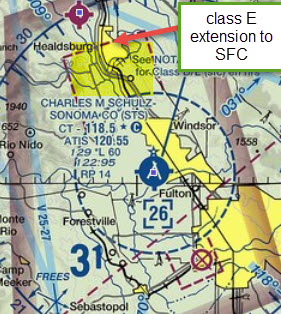 The regulation (cited correctly in your question) "within the airspace contained by the upward extension of the lateral boundaries of the controlled airspace designated to the surface for an airport."

Controlled Airspace. A generic term that covers the different classification of airspace (Class A, Class B, Class C, Class D, and Class E airspace) and defined dimensions within which air traffic control service is provided to IFR flights and to VFR flights in accordance with the airspace classification.

Therefore, as long as you have received a SVFR clearance from ATC, have at least 1 mile vis, remain clear of clouds, and between sunrise and sunset, you may fly your airplane under SVFR in the Class E surface area depicted in the picture above (as asked in your question)

12
Which parts of class E airspace can an ultralight (part 103) fly in without prior ATC authorization?
8
What are E2 and E4 airspace?
3
Re old (1993) US VFR sectional charts— when did the term “Class E” first appear?
4
What are the historical precedents of today's E2 and E4 airspace? (US)
2
What are all the US airports where E4 “extensions” change to E2 and become part of a larger E2 “surface area” when the tower closes for the night?
1
In the US, is there much variation among the various ARTC Centers as to where a SVFR clearance may be granted?
1
In actual practice, do ARTC Center personnel generally follow the rule that a SVFR clearance may be granted in E2 airspace but not E4 airspace? (US)
0
What indication has the FAA given that phrases like “surface area of Class E airspace designated for an airport” do or don't include E4 “extensions”?
1
In the US, how does the distinction between E2 and E3/E4 airspace affect pilots?
0
May an ultralight vehicle pass directly above KEGE at 9200 MSL at 1600Z with no prior authorization without violating FAR 103.17?
See more linked questions

4
Does FAR 91.155c apply to class E surface extensions?
11
In a part 91 formation flight within a mode C veil, are all the aircraft required to have their transponders on?