Which antenna on an commercial airline airplane is used for the transponder (SSR)?

On the 767-200 image I see no SSR antenna, but since that TCAS uses the transponder I guess that are sharing the same antenna. Am I right ? 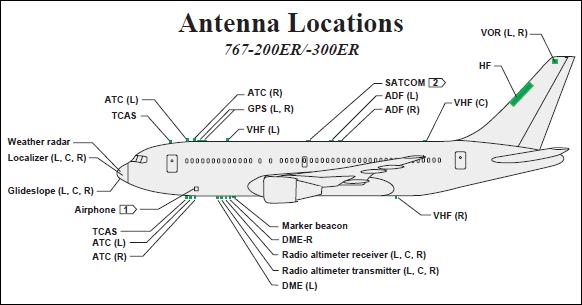 The SSR antennas are labeled ATC L and ATC R (two at the top, two at the bottom).

Both SSR and TCAS systems use the same communication protocol and use the same frequencies (1030 and 1090 MHz). They could well use the same antennas. However for best performance, SSR antennas are omnidirectional and TCAS antennas favor some sector, usually by beam forming.

On this B767-200 picture, TCAS antenna is the flat one at the front, and the yellow SSR antenna is a bit behind (only one):

See the full and higher quality photo by Ramon Jordi

Another airframe with two SSR antennas:

See the full and higher quality photo by Temo Madrigal

I was not able to find a good view of the SSR antenna on a B767-200, but on this A320, the two side yellow SSR antennas are more visible (as well as the single DME antenna behind):

Use and needs are different

I guess that are sharing the same antenna. Am I right?

As said, you could be right as SSR and TCAS operate on the same L-band frequencies, and can't time overlap. But they have actually dedicated antennas, because they need different radiation patterns:

Hum... not one antenna connectors, but four!

The flat shape of the TCAS radome (sometimes round) contains a 4-element phased array antenna which can be set to cover an hemisphere, but which can also focus on a quarter of this hemisphere. Example of design using a switched beam-forming network (SBFN): 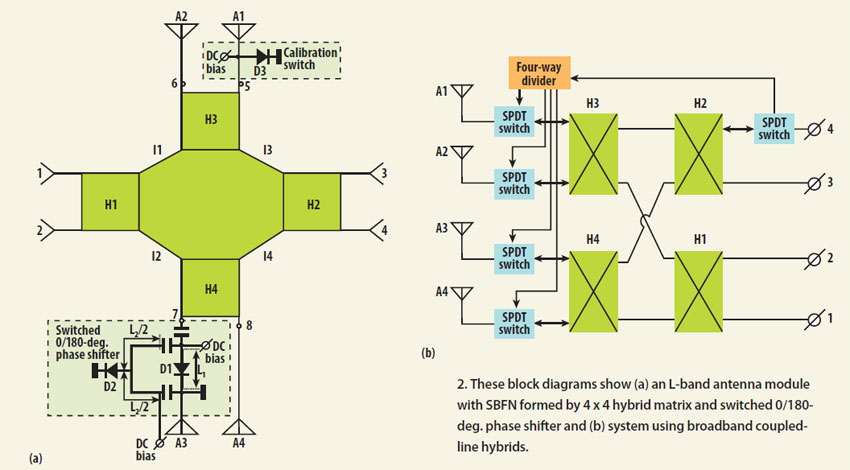 The four outputs labeled A1..A4 are connected to the four individual connectors under the radome.

TCAS uses the steering obtained with the array to select which direction to send interrogations and to listen to responses, in order to reduce synchronous garble from close mode C transponders responding simultaneously to the aircraft (1.7 NM radius), and FRUIT from all aircraft responding to a ground ATCRBS interrogation.

TCAS reverts the bottom antenna to the omnidirectional mode (same phase on the four antennas) and decreases RF power in landing and takeoff phases, to prevent radio spectrum overload.

For a Mode S transponder aircraft, we would have this kind of configuration: 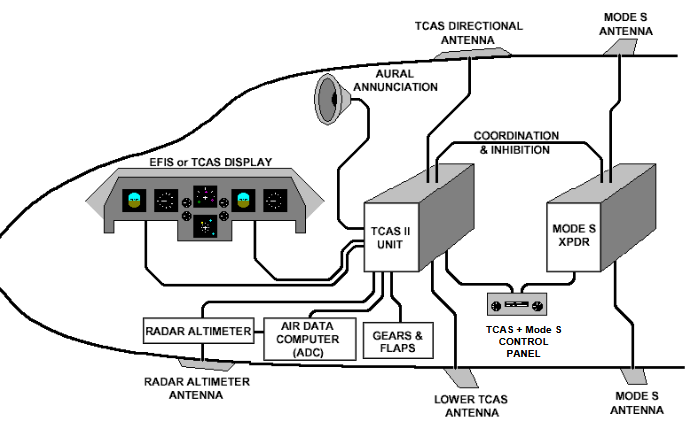 Note there is a connection between TCAS and SSR to inhibit each other when they are using the frequencies and protect their RF input. If I remember well, SSR mode has the priority (at least when the TCAS is not in a TA/RA phase).

Not the answer you're looking for? Browse other questions tagged transponder antenna or ask your own question.

14
What is Transponder Code 2000 actually used for?
35
Can a military pilot make his airplane invisible for the ATCs?
6
How does the modulation of the transponder work?
11
How does ATC locate a stealth aircraft if its transponder fails?
2
Why does setting the Legacy 600's transponder to standby mode also deactivate its TCAS?
16
Why do (or did, until very recently) aircraft transponders wait to be interrogated before broadcasting beacon signals?
1
What is the difference between SSR and ADS-B?
6
Why bits are mixed up (interleaved) during ATC transponder mode A and mode C reply format?
11
Why are gliders oftentimes not equipped with a transponder?
8
Does ADS-B use its own antenna?