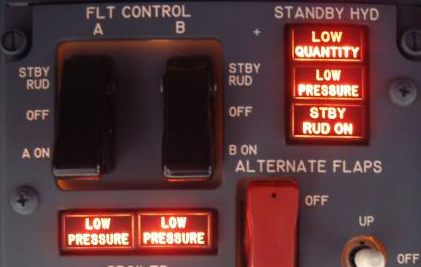 According to the Boeing 737 Flight Crew Operation Manual, the "Standby Hydraulic System" only powers the following:

It does not power, for example, brakes, ailerons, spoilers and the landing gear.

I speculate that the word is chosen to remind pilots that the system powers the rudder but not other primary flight controls.

Standby Rudder is a separate indicator light that was installed as part of the Rudder Enhancement Program, which was put in place after findings of the NTSB regarding the cause of accidents that occurred in the 90s. 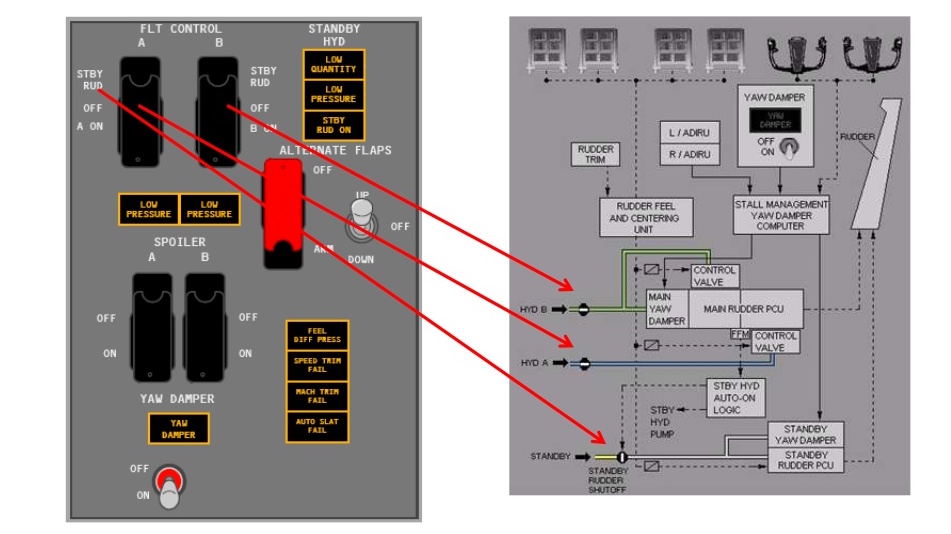 The 737NG also has a standby rudder PCU that moves the rudder during manual reversion operation. The wheel-to-rudder interconnect system (WTRIS) will coordinate (assist) turns by using the standby rudder PCU to apply rudder as necessary based upon the Captains control wheel roll inputs. From experience, I can verify that this makes the NG much easier to handle in manual reversion than previous generations.

There is only one rudder on the aircraft, so speaking of "the standby rudder" would be incorrect -- to describe it that way suggests the presence of a "main" rudder and a second "standby" rudder, and that's not what's on the 737. What you do have is the standby hydraulic system, which is used to provide backup hydraulic power to a few components (listed in @Kevin's answer) when one of the main hydraulic systems (A or B) becomes inoperative.

The standby pump comes on automatically under various conditions, essentially all related to loss of a main hydraulic system. So if a main system were to fail on short final, let's say, you'll have the Standby pump running to power the Thrust Reverser on the side where the failed system would normally power it -- no need for an immediate reaction to put the flight controls to Standby Rudder during a critical phase of flight. In that scenario, your good hydraulic system continues to power all flight controls just fine.

As @Koyovis describes, the RSEP modification added some additional safety features and the "Stby Rudder" indicator light. That light is new with the RSEP mod; the switch position had always been labeled like this. Essentially, the RSEP mod added sensors to detect if the A-system and B-system rudder PCU's were opposing each other. This is driven by the theory that a rudder PCU can "run away" and cause uncommanded actuation of the rudder to a hard-over position. Were this to occur, the RSEP mod enables the Standby Rudder PCU (i.e. the PCU for the rudder that is powered by the Standby Hydraulic System) to become active & "break the tie" so that whichever PCU is responding to flight control inputs "wins" and overpowers the runaway PCU. The Stby Rudder On light will come on if the Standby Rudder PCU is powered, and if the flight crew didn't command this by putting either Flight Control switch to "STBY RUDDER" then they know it is happening because of a "force fight" between the A and the B PCU's and that the Standby PCU is working to keep things under control. I've not heard of that happening during actual operations; maybe Boeing has.

Not the answer you're looking for? Browse other questions tagged aircraft-systems boeing-737 hydraulic-system or ask your own question.

37
Why evacuate wing at the front side after water landing?
6
Why is the 737’s aileron/spoiler authority reduced at low flap settings?
6
Why was the 737 main rudder servo valve’s vulnerability to causing uncommanded reversals never discovered in testing?
29
Why is the most common hydraulic fluid so poisonous?
11
Why does Thrust Reverser need to be operative during the cargo door operation?
15
How controllable is the 737 in single-engine manual-reversion flight? Is it controllably landable (or go-around-able) in this condition?
5
Why is the landing gear lever not set to OFF on the ground?
6
How are the 737’s elevator and aileron cables attached to their control tabs without impeding the control surfaces’ motion under hydraulic power?