Why does the Trent XWB have intermediate compressor stages?

I realized that the Rolls-Royce Trent XWB on the Airbus A350 has intermediate compressor stages. Why is that?

Is the low pressure compressor just the fan on the A350 and they don't call it a fan?

Jet engine designers have to find compromises all the time, and the one that counts here is between lower complexity and higher efficiency.

In the 1960s, Rolls-Royce fell behind in large commercial jet engines as competitors introduced large bypass ratio fans such as the GE CF6 and the P&W JT9D, which powered the new generation of wide body jets being introduced at that time. All efforts on the British side came to nought, partially for lack of funding (source: Wikipedia):

The company [Rolls-Royce] went ahead with the project and under the leadership of (Adrian) Lombard built the twin spool demonstrator. Overall development costs of the RB.178 was £2.6 million. As a comparison, the G.E. and P&W companies were awarded nearly $20 million by the U.S. DoD ( Department of Defense) to develop and build the TF39 and STF200 technology demonstrators.

or for the preference of US aircraft manufacturers for US engines. Wikipedia again:

There are perhaps many reasons why the RB.178 failed to take off and chief among them was the refusal of Boeing to accept the Rolls-Royce engine on the transatlantic 747.

Rolls-Royce realised that they had no chance to catch up by designing yet another two-spool fan and risked the company on a three-spool design, which would later become the RB 211. Wikipedia again:

Meanwhile, Rolls-Royce was also working on a series of triple-spool designs as replacements for the Conway, which promised to deliver higher efficiencies. In this configuration, three groups of turbines spin three separate concentric shafts to power three sections of the compressor area running at different speeds. In addition to allowing each stage of the compressor to run at its optimal speed, the triple-spool design is also more compact and rigid, although more complex to build and maintain.

The advantages of using three spools is that the speed of each stage can be more finely optimized, so each stage operates at a higher efficiency. Another promised advantage was the use of carbon fiber for the first stage fan, which allowed considerable weight savings and offered Lockheed a distinct advantage in its L-1011 TriStar over the very similar Douglas DC-10.

However, the carbon fiber fan failed the bird strike test and the engine did not meet its development targets. In the end, Rolls-Royce had to be taken over by the British government and the TriStar entered the market with a one-year delay. But the RB211 went into production, albeit with a delay. The gamble did not pay off commercially, but technically it placed Rolls-Royce instantly ahead of its competitors. When a higher-performance version of the RB211 was added as an engine option to the Boeing 747, the direct comparison with the two-spool designs made the efficiency gains of the three-spool design obvious. FlightGlobal reported in 1980:

The importance placed on fuel saving by airlines is emphasised by Qantas' adoption of RB.211-524 power for its new Boeing 747s - the only aircraft on which all big three fans are available. Qantas found that British Airways' Boeing 747s fitted with RB.211s burnt roughly 7 per cent less fuel than its JT9D-equipped fleet, a saving of about $1 million a year at today's prices.

The second oil crisis in 1979-1980 made those efficiency gains very relevant to the airline industry. But the three-spool design offers another advantage: By tailoring the number of stages and their diameter to the desired performance, the same basic design allowed Rolls-Royce to cover a much wider thrust spectrum with one basic engine design. The RR Trent is a direct development of the RB211 and covers a thrust range from 240 to 430 kN without compromising on efficiency. This enables Rolls-Royce to adapt the engine optimally to stretched or shortened versions of most airliners, so it is in an ideal position to offer the most efficient engine for the job. In fact, the successful development of a three-spool fan engine in combination with a better business model helped Rolls-Royce to gain an overall market share of 40%. Wikipedia again:

Sales of the Trent family of engines have made Rolls-Royce the second biggest supplier of large civil turbofans after General Electric, relegating rival Pratt & Whitney to third position.

For engines with thrust range as in the A320, the optimum architecture is a two-shaft layout: the cross-sectional area of the compressor reduces, causing the compressor blades to become smaller. If the smaller blades at the end of the compressor can rotate faster, efficiency increases - therefore the engine stages are split in a low pressure and a high pressure section. The fan is simply the first stage of the low pressure compressor: the blade length of the fan allows for spinning at the same rotational speed as the LP compressor and turbine. 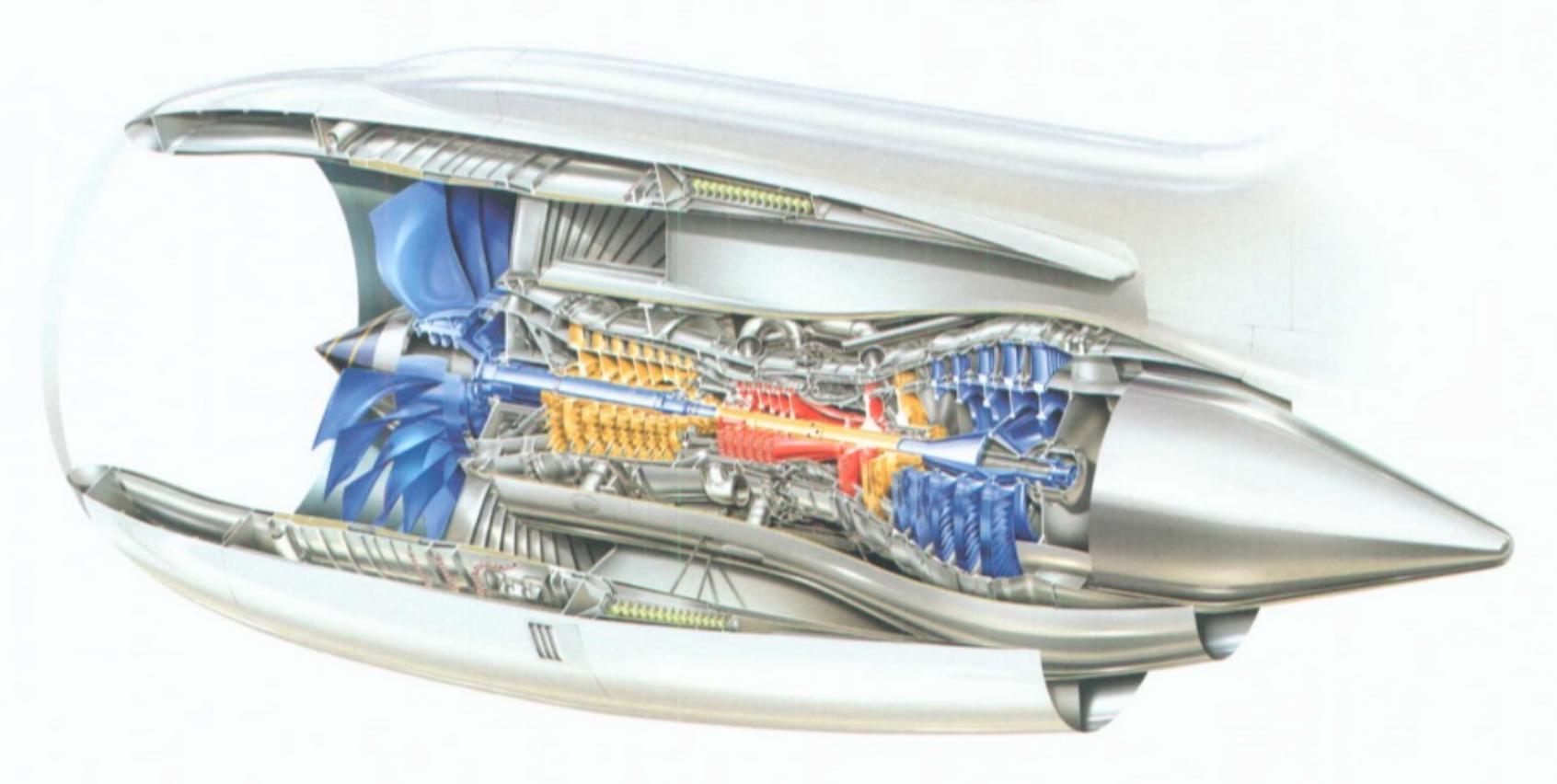 The Trent is a larger engine delivering more thrust though, and this justifies adding another shaft. The fan is a separate first stage compressor also delivering thrust. From Rolls Royce, The Jet Engine issue 5:

Larger turbofans can benefit from three shafts: in this configuration, there is a fan (LP), an intermediate (IP) compressor, and an HP compressor all running on separate shafts connected to respective LP, IP, and HP turbines. The separation of the fan and first compressor stages allows the shaft speeds and thus fan and blade velocities to be optimised more closely to the ideal operating conditions of each stage.

The three-shaft layout adds a level of mechanical complexity to the overall engine layout but reduces the reliance on variable geometry compressor features. The main benefit is that high thrust can be developed from a shorter, lighter engine than an equivalently rated two-shaft layout.

Although I don't disagree with the existing answers, I would frame it in a different perspective. The existing answers imply a tradeoff between complexity and efficiency in 2 spool vs 3 spool. To me that is not the right way to look at it. For example, this table, show that the 2 spool PW2037 for the 757-200 actually has slightly better thrust specific fuel consumption than the 3 spool RB211-535E for the same plane. Although these are older engines, it does show that 2 spool engines are not always less efficient than 3 spool engines.

To me, a better way to view 2 spools versus 3 spools is tradeoff between aerodynamic complexity and mechanical complexity.

As has already been pointed out, 3 spools allows the 3 different shafts to spin at their own best rates. This is definitely better for aerodynamics (and not just efficiency, but also better stall margin). So if this is so great, why not go to 4 shafts? Or 5 shafts? Why not have every single compressor stage on it's own shaft? The answer is that additional shafts add mechanical complexity:

All that extra stuff adds a lot more complexity to the mechanical design. So, if you go the 2 shaft route, the engine is significantly mechanically simpler. But the price you have to pay is aerodynamic complexity. To get to a comparable overall efficiency, you have to do a lot more work on the aerodynamic side to get there. For example, you need a lot more variable geometry (variable stator vanes, transient bleed valves, etc), you'll need to do a lot more complex CFD to get every last fraction of a point of efficiency out of each component, etc.

Not the answer you're looking for? Browse other questions tagged jet-engine terminology turbofan engine-design compressor or ask your own question.

1
What are the advantages of 3 spool over 2 spool turbofan engines?
16
Is it possible to drive a prop directly from a jet engine without a gearbox?
8
What is the future of manufacturer independent jet engine maintenance repair and overhaul (MRO) services?

10
What is the function of the protruding outlet on the Trent XWB?
9
Why are there fewer stages in the turbine than in the compressor of a turbine engine?
2
Does the compressor stationary vane have stagger angle?
18
Why do large turbofans generally have many more LP turbine stages than HP turbine stages?
0
Does a trent 900 engine have the ability to spin extra or more fans?
5
Is my understanding of subsonic inlets correct?
2
What do compressor/turbine stages mean, and why we need a different number of stages?