Why are only some aircraft in this formation creating contrails?

The Republic Day celebrations at New Delhi, India had a series of flypasts by the Indian Air Force.

What struck me the most was that in a formation with a C-17 in middle and two Su-30MKI flanking it, there were contrails visible from the Su-30MKI but not from the C-17: 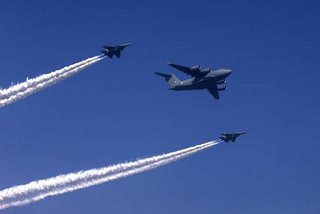 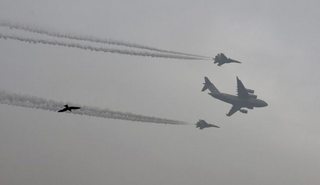 As per 'How does contrail formation differ from turbofan to turbojet?', contrails depend on the bypass ratio of the turbofan engine:

What would be the reason that in the first two photographs, the C-17 engines do not form contrail whereas the Su-30MKI seem to?

One possibility is that, this difference is due to possible different power settings on the two aircraft engines for the same speed (considering the different intended role).

Another thing was that such contrails were not visible on any other fighter aircraft (e.g., Tejas/LCA). Or even another pair of Su-30MKI along with a AEW&CS aircraft: 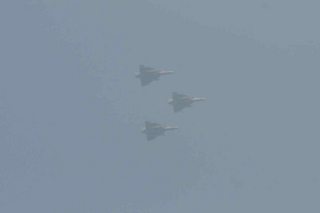 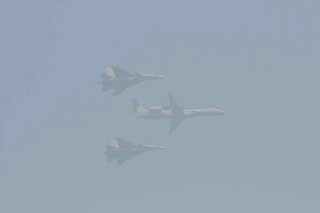 This 'party trick' is covered nicely on metabunk.org.

[It's the Su-30's] ability to inject unburnt fuel into the exhaust plume via the afterburner system. The super hot air of the exhaust instantly evaporates the volatile fuel, and then when it mixes with the cold air behind the plane the fuel reforms as a fine mist, essentially a fuel smoke cloud.

From: Forum post - "Trails from the back of Fighter Jets", Metabunk.org

Jets practicing for air-shows (or actually in air-shows) sometimes use smoke to create trails. This is made by injecting something like paraffin into the hot exhaust where it vaporizes and condenses as smoke.

And the accompanying image 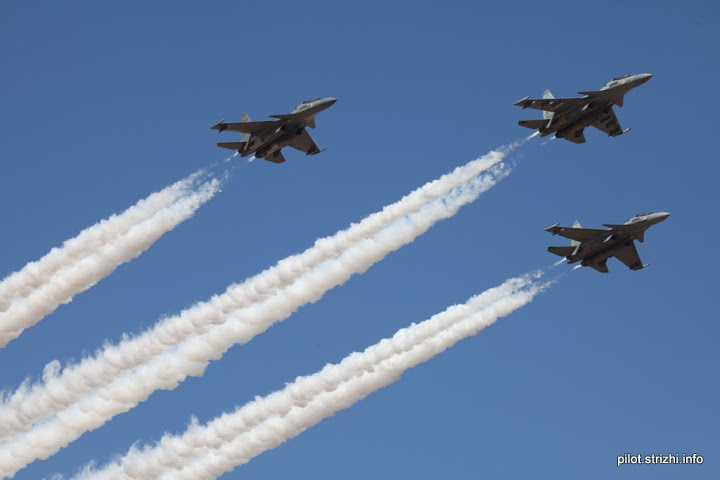 Looks a lot like the image in your question.

Not the answer you're looking for? Browse other questions tagged fighter turbofan flying-in-formation contrails or ask your own question.

20
Why are some contrails longer than others?
15
Why are contrails not visible from the cabin?
19
How does contrail formation differ from turbofan to turbojet?
5
How do contrails compare between piston-powered aircraft and jet aircraft?
12
Why do aircraft (namely military) need/use formation lights?
8
Are there areas to avoid while flying formation with a larger aircraft?
4
How does engine exhaust temperature affect contrail formation and why?
9
Why don't the contrails show the curvature of the Earth?