How is varying modulation depth achieved by localizer ground transmitters?

An approaching aircraft's navigation receiver uses the difference in depth of modulation between the 90Hz and 150Hz signals which are amplitude modulated onto an RF carrier (on a channel between 108Mhz and 118MHz).

My understanding is that the ground transmitter is formed by several pairs of transmitters forming two interleaved phased arrays to achieved directional beam forming.

My questions is how is the difference in modulation depth achieved by the transmitter system based upon aircraft's position relative to the landing strip's entreline? The beam strength decreases as you move away from it's own centreline, so is it actually that the entire modulated signal strength decreases which when de-modulated is effectively a difference in amplitude modulation depth?

Your question is very relevant, it can arise naturally if you happen to look at web pages using half correct descriptions (for example this one) to discover the ILS principle.

Galileo could say: And yet it moves...

The ILS is a combination of a localizer and a glideslope, both systems are very similar. The information provided now on will relate to the localizer, they apply to the glideslope too, with small adjustments. The design involves modulating the amplitude of a carrier. Let's clarify this first.

The depth of modulation used for the LOC signal is only 20% (40% for the G/S signal). This gentle modulation leaves some room for the LOC carrier to also carry identification tones (on 1020 Hz) and ATC voice used in case of lost communication.

The drawing above describes the modulated carrier in a time-amplitude relationship. Let's look at what happens in the frequency-energy relationship. Before modulation, all energy is concentrated at the carrier frequency (blue bar below). The modulation process creates two variable sidebands (lower and upper sidebands, known as LSB and USB), depicted in magenta:

Spectrum of a carrier AM modulated by a single tone

The modulating signal is a pure sine of constant frequency, each sideband contains its energy at a specific frequency. If the modulation index is 100%, the constant carrier contains 50% of the energy and each sideband 25%. The sideband seats on the frequency axis at a distance from the carrier equal to its own frequency, e.g. when a 100 MHz carrier is modulated by a 150 Hz tone, the LSB is created at 100 MHz - 150 Hz, and the USB at 100 MHz + 150 Hz.

The localizer signal is modulated by two tones, the reference at 90 Hz, the signal to compare at 150 Hz. Therefore each sideband energy is split between two frequencies:

This signal, known as CSB (carrier and sidebands) will be used as-is in the localizer. However as explained earlier, the in-phase / out-of-phase element must be sent along with CSB.

The localizer transmitter sends an additional signal with an inverted 150 Hz, known as SBO (sidebands only). For this signal the carrier element is removed:

How CSB and SBO are sent by the antennas

The combination of opposite phases for SBO signal creates a hole in the middle of the SBO radiation pattern, it seems there are two beams for SBO. CSB is radiated centered on this hole:

About the total power:

In order to achieve this radiation pattern, all the signals must be perfectly coherent (synchronized): 90 Hz and 150 Hz modulations, but also modulations and carrier. If this condition is not met, the resulting radiation pattern is not aligned with the runway and it has a random width.

When spread in space, the three signals mix by space modulation, the principle the ILS is based on and which is more simply known as wave interference.

Past 10° from the centerline, CSB cannot be sensed, only SBO can, the LOC indicator will deviate to full scale left or full scale right depending on the phase of SBO. Another signal is used to ensure a full scale deviation past this point (see clearance signal further down).

If you want to do some space modulation simulation, here are the details of the signals to mix (see details here):

We talked about the sidebands energy. Regarding the carrier, which is only present in CSB, the space modulation result always contains the energy of the original CSB carrier until reaching full scale (then the clearance signal provides the carrier because while all modulation information is in the sidebands, the constant carrier is necessary to synchronize and lock the receiver and to retrieve the coherent CSB and SBO from the modulated radiofrequency resulting signal).

Where the DDM finally appears

The energy of the sidebands varies relatively to the energy of the carrier, but wait... this is the same than saying the DM is varying (without actually changing anything at the transmitter level).

The DDM between 150 and 90 Hz, is a function of the receiver offset from the centerline (in the range -5° to +5° the function is quasi-linear).

The alignment offset is determined by sensing the DDM in the resulting signal.

The LOC antenna is an array system, usually made of a large number of individual log periodic antennas, to form a narrow directional beam.

CSB and SBO are not distributed equally to all individual antennas of the array. Before reaching the antennas, their amplitude is tuned to form the three sub-beams, and the SBO signal is phase-shifted:

We have now all the basic elements to draw a LOC system:

Components of the ILS LOC system

Let's imagine two antennas fed with our earlier CSB and SBO signals with SBO phase being shifted by +90° for antenna 1 and by 270° for antenna 2.

Let's see what happens when the receiver is on the centerline at P0, and at any point P1. For this simplified explanation to work, P0/P1 distance to LOC array must be much larger than distance d.

Receiver on the centerline

The received signal is the sum of the signals sent by the two antennas. As the distance traveled is the same, the phase at the receiver location is also the same. The signal at point P0 on the centerline is:

with $\beta$ being the angular distance from the centerline. This formula shows:

In the formula above, the system doesn't rely on a difference for the attenuation in free space for the antennas (K1/K2 coefficients are assumed equal).

Instead of relying on amplitude values (two-beam misconception), the system relies on phase difference between SBO and CSB:

Actual principle of the ILS, from this source.

The range of difference of depth modulation obtained must be mapped on the actual standardized values for LOC needle deviation, reducing the full range to a standardized guidance angle. The LOC specification are found in ICAO annex 10 to the Chicago Convention, volume 1, attachment C:

This setting is obtained by tuning the amplifier of the phase-shifter from each individual antenna (the amplifier is actually common to all antennas). This amplifier reduces the SBO signal influence on the DDM.

So far we have assumed the localizer signal is only composed of the course guidance mixing the two original signals CSB and SBO. But it is very difficult to obtain an actual highly directional beam, like the course beam, without creating unwanted lobes:

The problem with the secondary lobes is an aircraft approaching aligned with one of them will see it as being the main lobe, and will approach the runway using a wrong course. There are some techniques to minimize these unwanted lobes, but none is practical for large arrays like a LOC system. Alternatives are to block the unwanted waves after they are radiated, or to flood them, the solution used for ILS.

A replica of the course, the clearance signal, is sent with the course signal to outshine the secondary lobes.

The clearance signal has a power level of 10 dB less than the course level (a tenth of the power) and is radiated with a less directional pattern (less individual antennas to form the beam): 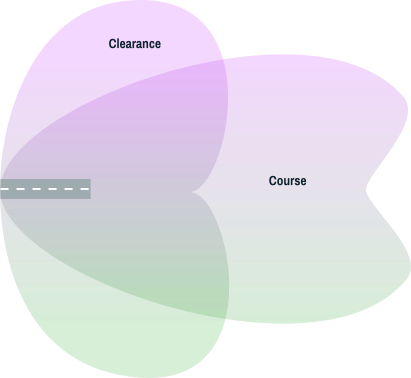 Today's localizers use a dual frequency system, this means the course and clearance signals are sent on separate frequencies.

When an ILS has a published VHF frequency f, the localizer course signal is actually sent on f + 4.75 kHz and the clearance on f - 4.75 kHz. The two signals can use the same aerials or dedicated antennas in the array. Example of signals send to each of the 14 antennas of a Thales LLZ array (refer to above for what are course, clearance, CSB and SBO signals):

Most of the information about ILS come from the 1983 thesis presented by Capt Dennis M. McCollum, B.S.. Respectful thanks to the author.

Not the answer you're looking for? Browse other questions tagged navigation avionics ils localizer or ask your own question.

26
How does ILS (Instrument landing system) work?
8
Why do localizer/glideslopes use 90/150Hz specifically?
2
How to calculate DDM in a ILS dual frequency system?
1
How the Log Periodic Dipole Antenna of Localiser help in varying modulation depth?

13
How is an on ground lightning strike test conducted?
4
What criteria does ATC apply to determine if an aircraft is established on the localizer if the pilot does not report it?
0
How does GPS measure any plane's ground speed?
4
How are the frequency pairings for localizer and glideslope decided?
6
How does the modulation of the transponder work?
8
Telluride (KTEX): Why is the localizer antenna located where the glideslope should be?
1
How the Log Periodic Dipole Antenna of Localiser help in varying modulation depth?
11
How does an eILS improve throughput (for the A380)?
1
How do navigation displays depict turn anticipation?