How does engine exhaust temperature affect contrail formation and why?

There was a german study about the "Influence of propulsion efficiency on contrail formation". In this study, an Airbus A340 and a Boeing 707 flew right next to each other.

The two contrail forming aircraft were 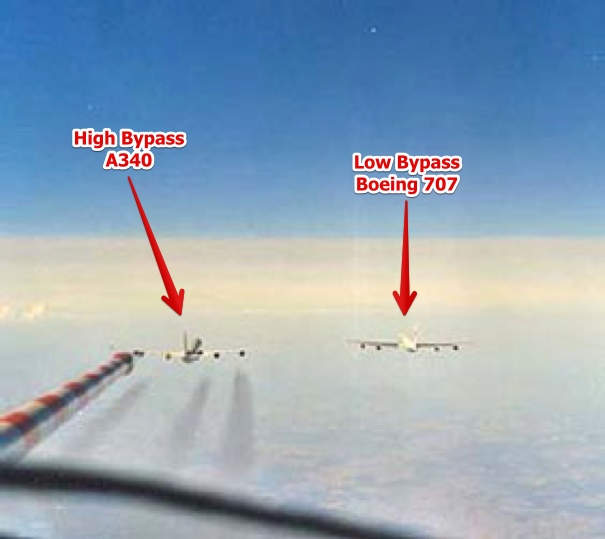 This has to do with the different exhaust gas temperatures of engines with different bypass-ratios.

Note, 'How does contrail formation differ from turbofan to turbojet?' does not answer the question regarding the EGT.

There are some building-blocks to the answer:

Part 1: Assumption/Simplification
Let's assume for a moment that the only difference between the two planes is the exhaust gas temperature (EGT). A less efficient engine will utilise less of the available (chemical) energy of the fuel. This means a less efficient engine will have a hotter and faster exhaust jet (wasting caloric and kinetic energy).

Part 2:
The water-content of the exhaust gas contains water from two sources: first the water (very low fraction) from the ambient air humidity and second from the combustion of the fuel (carbon-hydrates).

Part 3: Assumption
When humid air (from an engine exhaust) mixes with the atmosphere it is a reasonable assumption that the state of the atmosphere will not change measurably given enough time for the exhaust to mix out.

Part 4:
The mass of water vapour which can be contained in a given mass of air depends on pressure and temperature of the air. This dependency is often visualized in either the Mollier-Diagram or Psychometric-Chart. The following simplification of a Mollier-Diagram shows two areas or states humid air can have. For a given temperature and low water content the water is in its gaseous phase. If the water content is increased (over the saturation point) than part of the water will be condensed (fog, small water droplets).

Part 5: Answer-Part I
When hot humid air exits the engine it will cool down an partially/continuously mix with the atmosphere. This means temperature and water content/ratio (per a given volume) will decrease. The following sketch illustrates this for two starting points. At the end of this process the jet reaches the state of the atmosphere (see part 3). In the case of a lower EGT the cooling of the exhaust can cause the humid air to cross the saturation-line which will result in a contrail. 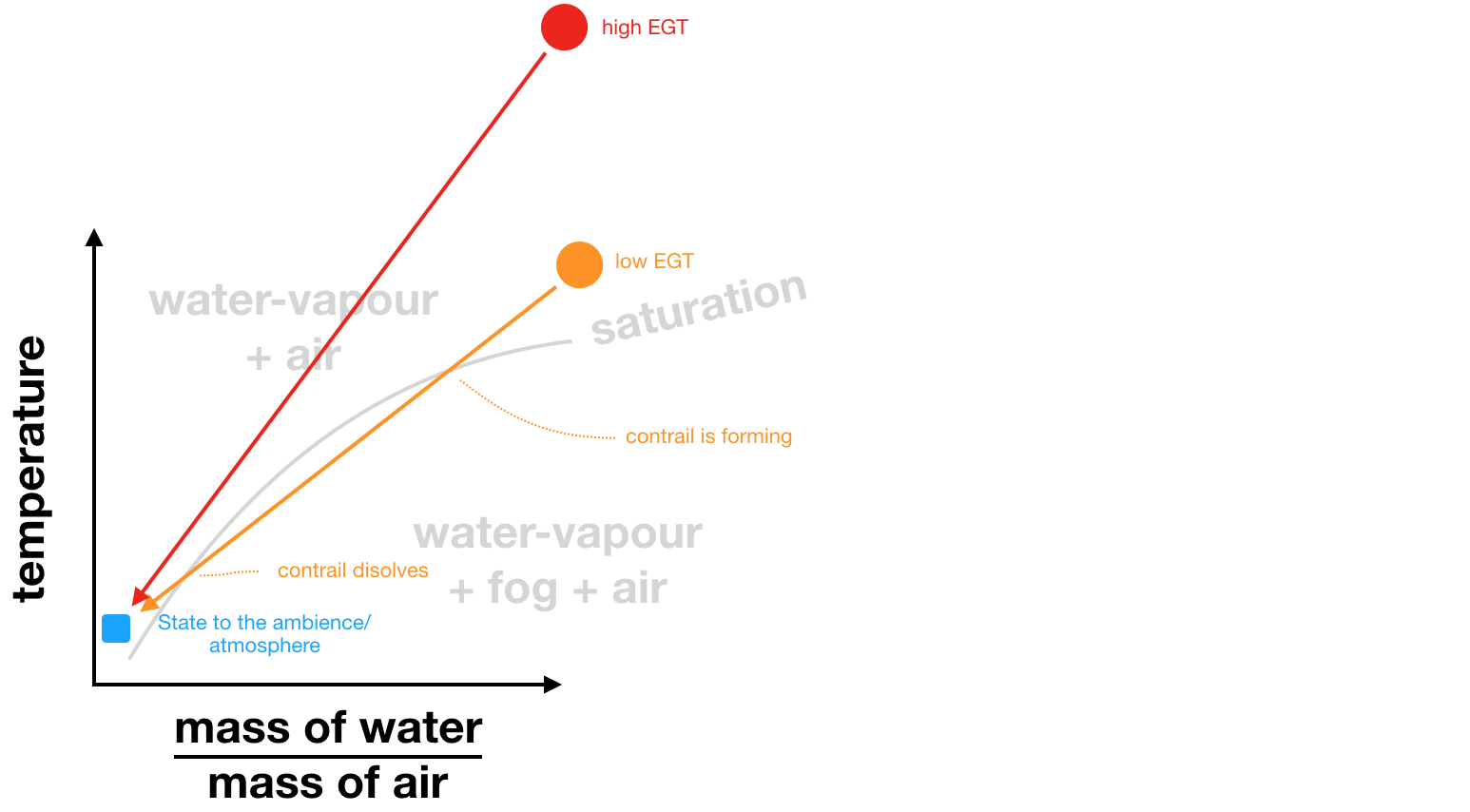 Part 6: Answer-PartII
A lower by-pass-ratio-engine is likely to have a higher velocity difference between the ambience/atmosphere and the jet from the engine. This will increase the mixing of the exhaust gases which suppresses the condensation as well.

The model used in the paper (Schumann 2000) also includes basic thermodynamic considerations for the jet-engine which do increase the predictive accuracy of the model. But the thermodynamic effect should be captured by the parts 1-6 given here.

18
How does contrail formation differ from turbofan to turbojet?

40
Why does afterburner exhaust have "pulses"?
18
How does contrail formation differ from turbofan to turbojet?
6
How to read the Appleman chart to predict contrail formation?
21
Why are only some aircraft in this formation creating contrails?
0
Why does a turbine engine compressor ratio affect stagnation pressure?
1
How much does the swirl of engine exhaust affect aircraft performance?
3
What is the relationship between fuel mixture, throttle setting and engine temperature?
0
Does aircraft nacelle length/shape/geometry affect the contrail formation?