The gearbox of a geared turbofan engine has 4 reducing gear small wheels being spun by a larger wheel or gear, simultaneously spinning the shaft that is attached to the fan.

That is 8 points of contact, two for each small wheel/gear meaning 8 the points where friction and subsequent heat would result. I gather the use of 4 small wheels/gears instead of one is for reducing the load on the teeth at each given point.

Would increasing the smaller gear wheels (i.e. the "planets" ) from 4 to 8 or 12 or 16 for a gearbox designed for an engine the size of a Trent 1000 or more render the gear teeth less likely to break or fail?

With some reinforcement on the teeth, would it be possible to make a gearbox for this large engine?

As for the extra heat, cooling and rotating the oil through a cooler or along the length of the aircraft several times over, exposed to the atmosphere at cruising altitude using a high pressure oil pump passing oil through a sealed gear box would take care of cooling.

With the ambient energy loses to heat would this render the engine a lot more fuel efficient and possible?

The fundamental question you seem to be asking is whether adding more planets to a planetary gear improves the load carrying capability of the gearbox. The answer to that question is yes... to a point.

Take a look at a picture of the PW geared turbofan gearbox. You'll note that there are five planets in there, and they are packed in pretty tightly. There's really no room to add any more. Although adding more planets would distribute the load such that each planet takes less load, it's impossible in this configuration because there is no space. Let's say that you really really wanted to make it six planets instead of five. The only way to make enough room would be make the planets smaller. As you make the planets smaller, then either the ring gear has to get smaller too, or the sun gear has to get larger. Either way, that is going to change the gear ratio (see formulas here). Specifically, the gear ratio is going to get closer to 1, which means the gearbox no longer does the job it was intended to do (namely reduce speed and increase torque).

So you can't have your cake and eat it too. If you want 16 planets in a planetary gear, you can do it, but the gear ratio will be something like 1.02:1 which is not useful. You might as well forget the gearbox and just do direct drive at that point. If you need a decently high reduction ratio like 2:1, you can do it, but you will be limited on the number of planets that you can fit in. 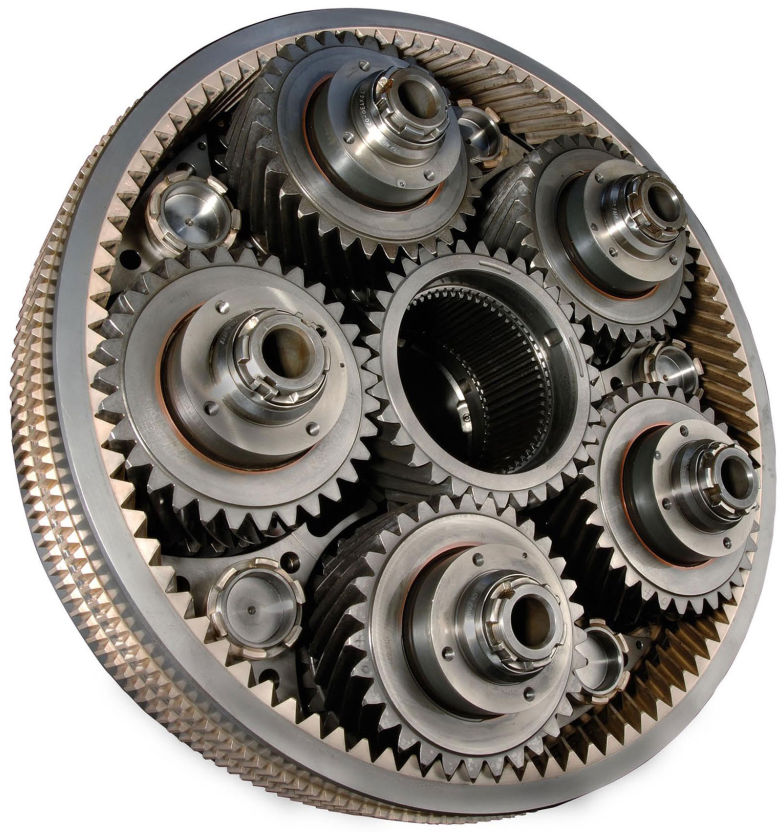 Not the answer you're looking for? Browse other questions tagged turbofan engine-design geared-turbofan gearbox or ask your own question.

25
Given the same engine, why install a gearbox on a turboprop but not on a turbofan?
0
Does a trent 900 engine have the ability to spin extra or more fans?
1
What are the pros and cons of adding a gearbox to larger jet engines?
4
Why does the Trent XWB have intermediate compressor stages?
0
What is the cause of cracking and corrosion in Trent 1000 engines?
2
What Oil thickness is used for the geared turbofan jet engine gearbox
17
What does a reduction gearbox do in a turbofan engine?