What are the main components of the Airbus fly-by-wire system? Is ECAM related to FBW?

I'm assuming that all commercial Airbus planes use a similar, if not identical, system. Can someone give me an overview of the parts of the Airbus fly-by-wire system?

I've also heard of ECAM. Is ECAM related to fly-by-wire?

ECAM and FBW are not directly related, but information and alerts regarding the flight control computers and actuators are displayed on the ECAM screens, like any other information not visible on the primary flight display or the navigation display.

The fly-by-wire concept is actually simple:

This design has two advantages:

The main calculators for Airbus A320 family are:

They are redundant and some functions dedicated to one computer can also be executed on other computers. 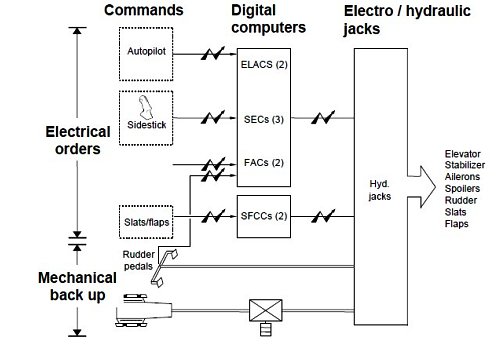 In parallel instruments in general have evolved from gauges to electronic displays. The elimination of the third crew member (the flight engineer supervising engines, fuel and other parameters) has led to automatic supervision of aircraft parameters and filtering of displayed information.

By default, only a few parameters are shown to the crew, other are replaced by alerts when something is unusual or requires attention. The crew has also the possibility to display parameters/status on demand, e.g. the status of the cabin doors or the fuel tanks. The electronic centralised aircraft monitor (ECAM) is just such system which monitors and displays alerts and important parameters. 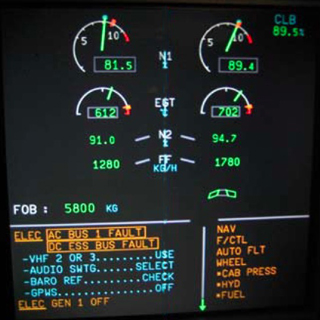 A319 ECAM after an actual electrical failure, source

The ECAM system includes two displays that can be configured by the crew: 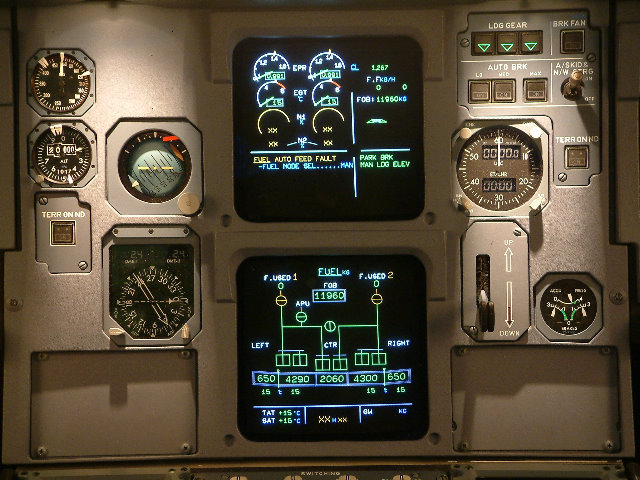 Relation between FBW and ECAM

ECAM indication of autopilot being off, and laws being changed, source

For more technical information about this topic, see question: Is a Control Law Degradation in Airbus Planes displayed on the ECAM?

Not the answer you're looking for? Browse other questions tagged flight-controls airbus fly-by-wire ecam or ask your own question.

29
What kind of delay does the A320's fly-by-wire system add?
16
Is a Control Law Degradation in Airbus Planes displayed on the ECAM?

25
How does the Airbus flight computer's voting system work?
6
Are NATO fly-by-wire fighters designed to feel like F-14 Tomcats?
5
Could the crew of XL Airways Germany Flight 888T not hear important chimes, due to the stall warning?
16
Would a wireless fly by wire system be practical?
10
How much computing power is needed to keep commercial and military planes flying?
1
Are fly-by-wire fighters protected in AoA?
1
Does anyone have photos of internal parts of ELAC, FAC, SEC or Boeing 777 flight computers?
3
What protections and feedback does the fly-by-wire of the Boeing 777/787 provide?
14
What is the difference between autopilot and fly-by-wire system?